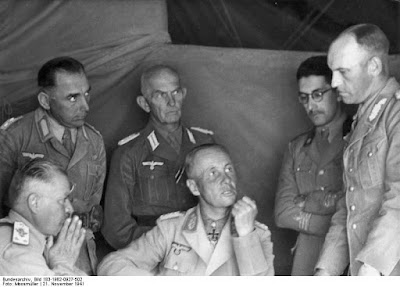 For the first time in his life, Rommel is on the retreat - a mortifying experience. ‘How humble one learns to be,’ he says in a letter to Lucie. His first halt is at the Gazala line, but the slow and panicky Italians, largely unmotorized, are an encumbrance. He does not have the gasoline or ammunition to fight back, and his best men are failing him. Neumann-Silkow lies in a soldier’s grave. Summermann of the Ninetieth Light Division has also been killed, by an RAF attack. Some of his surviving commanders are succumbing to desert plagues. Even Cruwell is sick, infected by jaundice. And what will become of the 14,000 troops he has left in strongpoints along the Sollum front and in the Bardia fortress, now that the Panzer Group is moving ever farther away from them toward the west? ‘Don’t worry,’ he writes to Lucie, I’m feeling okay and hope my lucky star won’t leave me.’

And yet Rommel has by no means shot his bolt. During December 1941 he proves that he is a master of the obstinate retreat. Probably only combat soldiers can appreciate the size of Rommel’s achievement in having retreated across nearly 300 miles in one month without serious loss to his force, while still inflicting savage wounds on his tormentors. Yet although he had salvaged the largely nonmotorized Italian troops, Bastico and his comrades did not render appreciation. ‘Understandably,’ mocked Rommel in a letter, ‘these would-be warlords have pulled wry faces. It’s easy to criticize.’

Praise for Rommel reached him from an unusual quarter. The Afrika Korps diary for December 17 had stated: ‘According to subsequent dispatches of the U.S. ambassador in Cairo, we had driven straight through the British Twenty-second Armored Brigade. He describes it as a masterpiece.’

How did Rommel know what the American ambassador to Egypt was putting in his dispatches? In September, Italian agents had burglarized the U.S. Embassy in Rome and photographed its copy of the ‘Black Code.’ For many months thereafter, Italian and German code breakers could eavesdrop on top secret American communications. Of sensational value were the reports sent to the War Department in Washington by the military attache in Cairo, Colonel Bonner Fellers, because he was a perceptive battlefield observer and kept himself abreast of all the English army’s plans against Rommel and its expectations of the Panzer Group’s next moves. This was a tremendous advantage to Rommel and helps explain his coming triumph.

Rommel - normally not overly security conscious - kept these ‘little fellers,’ as he engagingly termed the American dispatches, close to his chest. There is no mention of them in his diaries (or even his memoirs). Hitler knew about them, however. ‘Let’s hope that the U.S. legation in Cairo keeps us well posted about Britain’s military planning, thanks to their poorly encoded telegrams,’ he wisecracked to Hermann Goring over lunch one day in June 1942. One of Rommel’s intelligence staff recalls now: ‘Rommel used to wait for the dispatches each evening. We just knew them as the ‘Good Source.’ When Fellers reported to Washington, ‘The British are preparing to retreat, they are burning secret papers,’ then Rommel would really see red - there was no holding him.’

As yet Rommel’s preoccupation in January 1942 was survival. But he was growing ever more sanguine. He knew that time was now in his favor. Under Field Marshal Albert Kesselring, a new air force had arrived in the Mediterranean, and squadrons based in Sicily were neutralizing Malta by air raids. U-boats were harassing the British fleet. Rommel wrote approvingly on January 4, ‘Kesselring’s coming to see me again today. We’re both now working hand in glove.’ And the next day: ‘We’re gradually getting more materiel over here. He’s really knocking the stuffing out of Malta.’ That was the day, January 5, 1942, that nine merchant ships - escorted by no less than four Italian battleships - safely docked at Tripoli and unloaded over fifty tanks for Rommel, and 2000 tons of aviation fuel. This was Hitler’s New Year’s gift to his favorite commander. ‘If today’s convoy succeeds in getting through,’ Hitler told General Gause - his guest for lunch in his bunker headquarters – ‘then the British are going to have to look out!’ A few minutes later Gause commented, ‘It was a relief for us to learn of Japan’s entry into the war.’ Hitler was at that time unperturbed by the fact that he was also at war with the United States, and commented to Gause: ‘Yes, a relief. But also a turning point in history. It means the loss of a whole continent, India. And that we must regret, because it is the white race that is the loser.’

For several days Rommel toured his units, digging in along the line at Mersa Brega…
Posted by Mitch Williamson at 1:35 PM