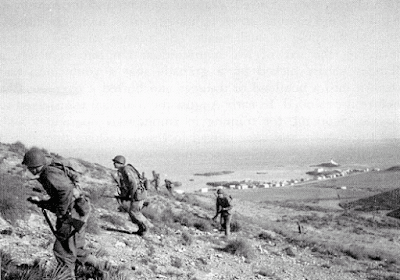 Rangers train on the terrain of the 8 November assault at Arzew (U.S. Anny photograph).

Dieppe proved to be the only operation undertaken by Darby’s Rangers in accordance with Marshall’s original concept. In late July the U.S. Joint Chiefs of Staff, under pressure from a president anxious for action against the Germans on some front, reluctantly bowed to British arguments for an invasion of French North Africa, code named Operation TORCH. As planners examined the task of securing the initial beachheads, they perceived a need for highly trained forces that could approach the landing areas and seize key defensive positions in advance of the main force.

Accordingly, Darby’s battalion received a mission to occupy two forts at the entrance of Arzew harbor, clearing the way for the landing of the U.S. 1st Infantry Division of the Center Task Force.

The performance of the Rangers in their first independent mission reflected their emphasis on leadership, training, and careful planning. In the early morning hours of 8 November two companies under Darby’s executive officer, Maj. Herman W. Dammer, slipped through a boom blocking the entrance to the inner harbor of Arzew and stealthily approached Fort de la Pointe. After climbing over a seawall and cutting through barbed wire, two groups of Rangers assaulted the position from opposite directions. Within fifteen minutes, they had the fort and sixty startled French prisoners.

Meanwhile, Darby and the remaining four companies landed near Cap Carbon and climbed a ravine to reach Batterie du Nord, overlooking the harbor. With the support of Company D’s four 81-mm. mortars, the force assaulted the position, capturing the battery and sixty more prisoners. Trying to signal his success to the waiting fleet, Darby, whose radio had been lost in the landing, shot off a series of green flares before finally establishing contact through the radio of a British forward observer party. The Rangers had achieved their first success, a triumph tempered only by the later impressment of two companies as line troops in the 1st Infantry Division’s beachhead perimeter.

Ranger losses were light, but the episode foreshadowed the future use of the Rangers as line infantry
While Allied forces occupied Northwest Africa and advanced into Tunisia, Darby kept his Rangers busy with a rigorous program of physical conditioning and training in night and amphibious operations. Rumors of possible raiding missions spread within the battalion, but, as December and January passed without any further assignments, morale rapidly declined. Many Rangers transferred to other units. As yet, the Army still had no doctrine or concept of the employment of such units on the conventional battlefield, or elsewhere, and American field commanders were more concerned about their advance into the rear of Field Marshal Erwin Rommel’s Afrika Korps than in any program of seaborne commando raids.

In early February 1943 the Allied high command finally found a mission for the Rangers. Lt. Gen. Dwight D. Eisenhower’s theater headquarters attached the battalion to Maj. Gen. Lloyd R. Fredendall’s II Corps in Tunisia. Hoping to gather intelligence and mislead the enemy regarding Allied strength and intentions, Fredendall directed the battalion to launch a series of raids against the Italo-German lines. The Rangers struck first against the Italian outpost at Sened. On the night of 10-11 February three Ranger companies marched through eight miles of rugged Tunisian terrain to a chain of hills overlooking the position. After observing the outpost by day, the Rangers, about midnight, began a four-mile approach march, advancing to successive phase lines and using colored lights to maintain formation. At 200 yards the Italians spotted their advance and opened fire, but most of the shots passed harmlessly overhead. The Rangers waited until they were fifty yards away before launching a bayonet assault. Within twenty minutes, they had overrun the garrison, killing fifty and capturing eleven before withdrawing to friendly lines.

The raiding program was soon cut short by developments to the north. Within days of the action at Sened, the Germans launched a counteroffensive through Kasserine Pass, roughly handling the green American units and forcing Fredendall to withdraw his exposed right flank. After serving as a rear guard for the withdrawal, the Rangers held a regimental-size front across Dernaia Pass and patrolled in anticipation of a German attack in the area. It would not be the last time that field commanders, short of troops, used the Rangers as line infantry in an emergency.

When the II Corps, now under Maj. Gen. George S. Patton, Jr., returned to the offensive in March, the 1st Ranger Battalion played a key role in the Allied breakthrough. After spearheading the 1st Infantry Division’s advance to EI Guettar, the Rangers found the Italians blocking the road at the pass of Djebel eI Ank. The terrain to either side of the position appeared impassable, but Ranger patrols found a twelve-mile path through the mountains and ravines north of the pass to the Italian rear.

During the night of 20-21 March, the battalion, accompanied by a heavy mortar company, followed this tortuous route, reaching a plateau overlooking the Italian position by 0600. As the sun rose, the Rangers, supported by the mortars, struck the Italians from flank and rear, while the 26th Infantry made a frontal assault. The enemy fled, leaving the pass and 200 prisoners in American hands. After patrolling and helping to repulse enemy counterattacks from a defensive position near Djebel Berda, the Rangers returned to Algeria for a rest. Shortly afterward, the Axis surrender of Tunis and Bizerte concluded the North African campaign.

Posted by Mitch Williamson at 2:03 PM