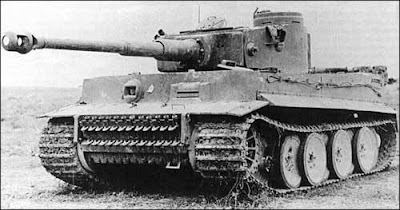 The Allied forces did not have a tank that could counter the Tiger, so they resorted to the tactic of pulling back from ridge to ridge while laying minefields that were protected by antitank guns. Artillery bombardments were also fired on the Tigers when they were slowed by the minefields. As has been shown, this tactic was very effective.

On 17 March 1943, Heavy Tank Battalion 504 took possession of Heavy Tank Battalion 501’s 11 remaining Tigers; it later surrendered on 12 May 1943. During this time, they encountered many of the same problems as their predecessors, although German forces were primarily on the defensive during the two months Heavy Tank Battalion 504 fought in North Africa. They assisted in stopping the breakthrough of the American 1st Armored Division in the vicinity of Maknassy during the end of March 1943. They also helped temporarily stop the British offensive in the vicinity of Medjez el Bab, as well as numerous other smaller defensive engagements. This battalion did not engage in any large-scale offensive operations. It performed defensive missions to defeat enemy penetrations of the front line.

The battalion also counterattacked several times, as part of a larger German force, to reestablish front line positions. The battalion was only able to maintain an operational readiness rate of about 50 percent for their Tigers, and the largest number of Tigers that were operational at one time was 17 on 4 April 1943. Heavy Tank Battalion 504 lost a total of eight Tiger tanks between 17 March and 12 May 1943, and destroyed the remaining 14 to prevent their capture before the unit surrendered to Allied forces.

During the two months that they operated in Tunisia, Heavy Tank Battalion 504 destroyed more than 150 enemy tanks. Prior to destroying the 14 remaining Tigers, the battalion achieved a tank kill ratio of 18.8 enemy tanks for every Tiger lost; because the entire battalion was ultimately lost, however, the kill ratio measured against all 22 Tigers committed was still a respectable 6.8 enemy tanks destroyed for every Tiger.

This battalion’s counteroffensive actions were effective in delaying the Allied forces in Tunisia. They could have been even more cost effective had the Germans been able to evacuate the remaining Tigers of the battalion to Sicily or Italy.

This battalion, like Heavy Tank Battalion 501, also suffered from inadequate recovery assets during its retrograde actions. Of the eight Tigers lost prior to surrendering, only four were lost as a result of direct enemy contact. Of these four, the battalion destroyed two because they were unable to recover them. That meant that enemy fire completely destroyed only two Tigers, one from concentrated antitank and artillery fire, and the other from a direct hit by an artillery round.

This testifies to the survivability of the Tiger tank, but it also highlights its weaknesses. As the Germans were discovering, the Tiger was a very maintenance- intensive combat vehicle that had a limited radius of action because of the high fuel consumption and maintenance requirements. These weaknesses were exacerbated when the Germans withdrew following the Allied offenses in Tunisia.
Although the actions of Heavy Tank Battalion 504 indicate that Tigers were effective in destroying enemy tanks, if the German Army had devoted some resources to developing an armored recovery vehicle, they may have been able to reduce the number of Tigers destroyed by their own crews. Only two Tigers were total and complete losses on the battlefield as a result of enemy direct fire. For the loss of these two Tigers, the battalion destroyed over 150 Allied tanks, which equals a kill ratio of 75 to 1 in tank versus tank combat. Fortunately for the Allies, there was more than one way to kill a Tiger. Unfortunately for the Germans, the solutions to the twin problems of recovering such massive machines when damaged on the battlefield and conducting the maintenance required to keep such complex vehicles running would prove elusive.

Posted by Mitch Williamson at 1:59 PM