Wehrmacht in Tunisia I 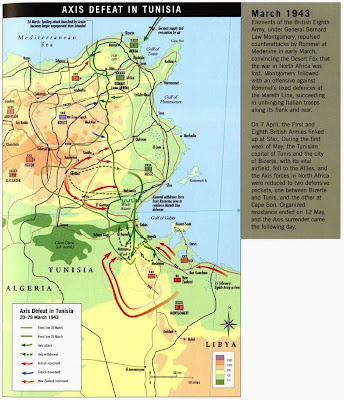 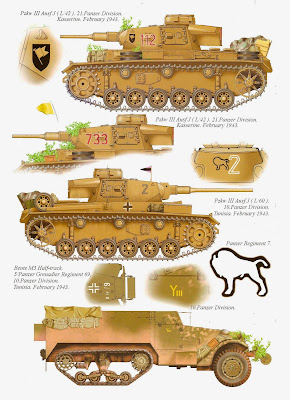 In late 1942, while Rommel’s forces retreated out of Egypt and Anglo-American forces converged on them from east and west, newly arrived German and Italian formations were trying to shore up the Axis presence in North Africa. The Axis had abandoned any ambition to hold on to Libya, let alone renew the offensive into Egypt. Its priority now was to maintain a bridgehead in Tunisia, and to keep the two Allied advances separate and thereby force them to use double the number of supply lines. Hitler believed this bridgehead was essential to keeping the Allies away from Italy, and in keeping Italy in the war.

While Field Marshal Montgomery continued his somewhat stately pursuit of Rommel in the east, the joint Allied force advancing from the west was slowed by the mountainous terrain of northwest Africa. Newly arrived Axis forces were thus able to establish a bridgehead well before the Allies reached Tunisia. The first German commander on the spot was Lieutenant General Walther Nehring. Nehring was placed in charge of the newly formed XC Corps, later renamed the Fifth Panzer Army, on 17 November, even though its initial strength comprised fewer than 25,000 German and Italian troops. Nehring countered the Allies’ initial attacks on the Tunisian bridgehead. The time bought enabled stronger German forces under Colonel General Hans-Jürgen von Arnim to reinforce the bridgehead. By the start of February 1943, over 100,000 Axis troops had arrived, including three new German army divisions and the remains of Rommel’s German-Italian Panzer Army. Facing them along Tunisia’s Western Dorsal were the British First Army, US II Corps and the French XIX Corps, which consisted of Free French colonial troops from North Africa. The Axis had temporary numerical superiority. This would disappear, however, as soon as Montgomery’s Eighth Army arrived from the east.

The Axis forces were at the very end of a very, very precarious supply line, across a Mediterranean Sea that the Allies now dominated unassailably. They had to go to desperate lengths to conserve what got through to them or what they already had. At one point, the 15th Panzer Division had to step in to forbid its men from trading pieces of uniform for goods from local Arabs, reminding them: ‘the uniform is the soldier’s robe of honour, and not some civilian rags to be chucked away’. Indeed, because Tunisia’s greater population density threw up new day-to-day challenges, the 15th Panzer Division produced a poem for its men fighting Allied ‘Panzers’ (tanks) the better to ensure they avoided firing on the locals accidentally:

Firing in Tunisia
Can bring trouble on your head!
You might not hit a Panzer
But an Arab’s hut instead.
Wear spectacles to help you,
And make sure you’ve got the nous
To fire on a Panzer,
And not an Arab’s house.

Rommel’s arrival in Tunisia caused friction between himself and Arnim, a stiff old-school Prussian who was contemptuous of the Nazi regime. Rommel, though his disillusionment with Hitler had already begun, was Arnim’s opposite in nearly every respect. Field Marshal Kesselring had his work cut out trying to get them to cooperate. Yet the Axis forces in Tunisia did hold advantages. Among them was a small number of the new heavy Mark VI Panzer, the Tiger, whose 88mm gun was much superior to the Sherman’s 75mm.19 The Tigers were a headline product of Germany’s now greatly improving armaments output. From late 1942, the top priority was armoured fighting vehicles. In September, Speer announced a monthly production target of 50 Tigers, six hundred of the new Mark V Panther medium tanks, 150 light tanks, and a mix of six hundred mobile assault guns and self-propelled artillery pieces. Tank factories were ordered to go over to a 72-hour working week.

Favouring the defenders even more was the Tunisian terrain. This was no longer war in the desert, but war across mountains and ravines. The Germans were particularly adept at placing their artillery and machine guns in commanding positions on ridges. Tunisian terrain guaranteed heavy losses for any army attacking it.

Even more so if that army was at the foot of a steep learning curve. The US army in Tunisia, under the overall charge of General Dwight D. Eisenhower, learned from its mistakes faster than the British learned from theirs in the Western Desert, but the process was still painful. The starkest contrast between German and US forces in Tunisia was that the German forces contained a large core of hardened combat veterans, particularly among the Afrika Korps, whereas the US army was overwhelmingly an army of newly recruited, uniformed citizens. The United States’ isolationist stance following the First World War, and the financial priorities of the interwar years, not least during the Great Depression, had debilitated the country’s armed forces. The danger of war and the German triumphs of 1939–41 had jolted the US army into developing an armoured-warfare capacity. However, the US army relied much less than the Germans on skilful manoeuvre and operational art, and much more on General Ulysses S. Grant’s eighty-year-old doctrine of grinding down the enemy with superior resources.

In order to do this as effectively and efficiently as possible, the US army organized itself along scientific management lines. This approach had advantages: for one thing, it did not suffer the adverse effects of having two high-command offices. However, the scientific approach also created a top-down command style that required officers to weigh up all relevant factors in any given battle situation before deciding which course of action to take. This left them little room for surprise, improvisation or initiative.

US army basic training was shorter than its German equivalent, and placed less importance on developing the men’s psychological and physical attributes. Instead, it sought to develop their skills in particular tasks, breaking down those tasks into smaller components. Nor, on the whole, were US soldiers placed in regionally based units, as German soldiers were. This extensively deprived the US army of the benefits to morale of raising, training and deploying soldiers from the same region together in the same unit. US NCOs were particularly inferior to their German counterparts, for the interwar US army had enjoyed far less social kudos than its German equivalent, and had failed to attract high-quality recruits in the numbers needed to create a core of high-quality NCOs.

On the other hand, at least private soldiers who proved themselves in battle were not held back from being promoted to NCO. And even before the United States entered the war, the army was taking further steps that would better enable it to meet the challenges of combat. There was colossal benefit, of course, in the industrial output of the globe’s most powerful economy. The army reduced the size of its infantry units, but buttressed their firepower, equipping them with extra machine guns and mortars, together with the highly effective ‘bazooka’ anti-tank rifle. Infantry divisions also became motorized with half-tracks and largely self-propelled artillery, while the Americans aped the Germans by making their armoured divisions less tank-heavy and more balanced.

Nevertheless, the Tunisian campaign harshly exposed the US army’s continued shortcomings. The Americans felt compelled by the terrain to disperse their armour rather than concentrate it. They had far to go before they could practise combined-arms warfare as proficiently as the Germans. Furthermore, because the Americans’ grasp of manoeuvre warfare was found wanting, they often tried to compensate with an offensive-minded attitude, leading to some recklessly ill-advised attacks. The Americans’ lack of experience in interservice cooperation was clear in the ineffective air support they provided for their ground troops. Nor, as yet, did they concentrate their artillery in the mass that was needed.

The Germans’ initially contemptuous view of the US army was coloured not just by their military judgment, but also by Nazi racial stereotypes about the ‘degenerate’ multicultural United States. ‘We fought the Ami [American] a few days ago,’ wrote Lance Corporal Siegfried K. of the 15th Panzer Division in mid-February 1943, ‘and destroyed over ninety of his tanks. We’ll blow him and all his Negroes and trash races to perdition.’ Ironically, however, the severe racial segregation that characterized the US army at this time kept its African-American personnel away from frontline combat units.

Alongside the US troops in North Africa were Free French forces, including skilled mountain fighters from France’s North African colonies. Such soldiers posed acute danger to Axis troops in the mountainous terrain of Tunisia. The other Allied contingent was the division-strong British First Army, under General Kenneth Anderson. The First Army was a formation drawn from the Home Forces, troops who had been trained in Britain while the Eighth Army had fought Rommel in the Western Desert. It exhibited several of the weaknesses in the Home Forces’ training and doctrine. For one thing, its troops suffered the shortcomings of the new British innovation of battle drill. Useful though this was, it was imparted to uneven standards across the different regiments. This was yet another symptom of the British army’s failure to create a system that disseminated good practice throughout its units. Nor did battle drill in itself enable British soldiers to achieve effective manoeuvre and firepower dominance on the battlefield. The British army’s inadequate dissemination of best practice was also apparent in the First Army’s failure to concentrate its artillery more effectively, and in its poor air support – defects the Eighth Army had suffered from but had since corrected. However, the Americans and the British First Army would prove faster learners than the Eighth Army. Further, General Alexander, in overall charge of the British land forces in North Africa, smoothed the learning process by alternating and coordinating attacks on the Axis from east and west after Montgomery’s forces arrived from the east. This helped the Allies to maintain constant pressure on the Axis while giving their own formations the opportunity both to reflect and to recuperate.

Posted by Mitch Williamson at 5:45 PM