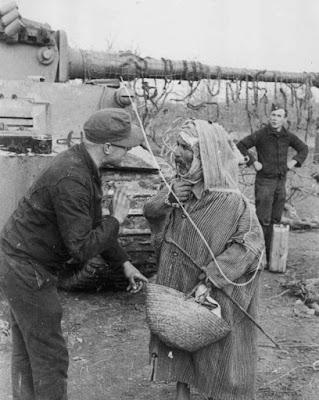 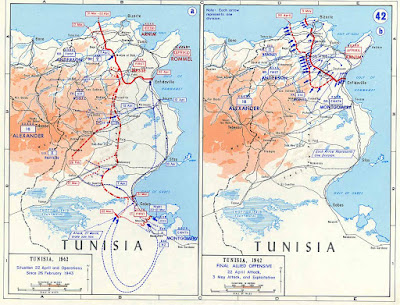 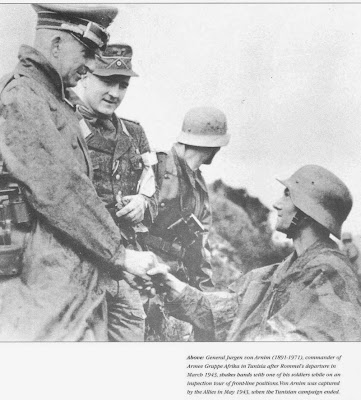 In mid-February, Rommel and Arnim buried their differences long enough to mount a two-pronged counterattack against the Americans. Arnim unleashed Operation Spring Breeze, employing two Panzer divisions against US formations along the main Allied line of the Eastern Dorsal. At one point, 1,500 American troops were encircled and captured, and the Americans pulled back their whole line to the Western Dorsal. Rommel’s forces, the 15th Panzer Division and the Italian ‘Centauro’ armoured division now launched Operation Morning Air from the south, against US defences in the Kasserine Pass through the Western Dorsal. Rommel’s 88s beat off US counterattacks, and by 20 February, US defences at the pass had collapsed, the troops manning them fleeing with the loss of two hundred tanks. Then, however, the Americans began their ascent of that steep learning curve; their resistance stiffened, their artillery exacted heavy losses on the Panzers and Rommel was unable to exploit his success further. The field marshal later credited the Americans with the improvement they showed over the course of the battle: ‘Although it was true that the American troops could not yet be compared with the veterans of the Eighth Army. … They made up for their lack of experience by their far better and more plentiful equipment and their tactically more flexible command.’ Hans von Luck concurred, asserting in his memoirs that the Americans ‘adapted immediately to a changed situation and fought with great doggedness’. Rommel was also let down by Arnim; his Prussian colleague had refused to release part of one of his Panzer divisions to support him, even when Kesselring had ordered Arnim to do so. Nor, this time, had Rommel helped himself: rather than concentrating his attack on the Americans’ weakest point, as time-honoured German practice directed him to do, he had dissipated his offensive power by attacking at three different points.

Another sign that Rommel’s touch was wobbling came when Montgomery’s recently arrived Eighth Army repulsed his attack at Medenine on the Mareth Line on 6 March. Medenine was essentially an action replay of Alam Halfa, but with even higher German losses. ‘The Marshal has made a balls of it,’ Montgomery reportedly remarked. The Eighth Army was helped, as it had been since the summer of 1942, by complete air superiority, and by Ultra decrypts revealing exactly where the Germans would attack. Furthermore, the advent of the six-pounder gun had boosted the British army’s anti-tank capability.

The British had yet to master combined-arms operations fully. Among other things, their artillery was still not targeting the full depth of the enemy’s defences effectively enough, and they were not deploying their forward anti-tank guns quickly enough.35 Yet the Tunisian campaign was enabling the British, like the Americans, to climb the combined-arms learning curve. Indeed, by now both the British and the Americans were firmly shedding their initial gung-ho attitude to armoured warfare, providing their tanks with vital infantry cover, and coordinating their tanks and infantry increasingly effectively. In the air, the appointment of Air Marshal Sir Arthur Conyngham as head of the whole of the Northwest African Tactical Air Force enabled him to transfer best practice from his old command of the Desert Air Force and greatly improve air-ground coordination.

By mid-March 1943, the German army in North Africa had run out of road. The Axis supply basis in North Africa was already increasingly threadbare, and now Rommel and Arnim’s offensives had used up all the remaining fuel. The Axis forces, despite further reinforcement, were now outnumbered two to one. Such reinforcements as the Germans could get across to Tunisia could not alter the campaign’s impending outcome; rather, they were ‘committed to the flames’, as General Guderian later put it. A sign that the Germans knew the game was up was the German-Italian Panzer Army’s latest and last name change, as it was redesignated the Italian First Army and placed under the command of General Giovanni Messe; both this and the Fifth Panzer Army were now placed under Rommel’s command as Army Group Africa. Further attacks by Montgomery, and by US II Corps, now under General George S. Patton, did not make a decisive breakthrough, but did make good progress. With the collapse of the Mareth Line, abandoned by the Axis when the Italian First Army fled from it in disarray, the Allied armies in east and west linked up.

The Luftwaffe in the Mediterranean theatre, meanwhile, was being ripped to shreds. Between November 1942 and May 1943, it lost nearly 2,500 aircraft. This comprised over 40 per cent of the Luftwaffe’s entire strength as of 10 November 1942. Losses of this magnitude could not fail to affect the performance of the Luftwaffe in the east either, but in the Mediterranean they had the immediate effect of stripping Axis shipping of air cover. As a result, 623 Panzers, 1,719 vehicles, and 1,413 artillery pieces earmarked for the Germans in North Africa ended up on the bottom of the sea.

The Germans on the ground did not give up. In the middle of April, Corporal Karl B. of the 334th Infantry Division, a Kriemhild formation comprising Replacement Army units from various locations, wrote: ‘Our neighbouring regiment was at the wire and destroyed a breakthrough attempt. Now we’re expecting a visit in our sector too, but we’ll show the enemy what’s what. Up to now we’ve had no anti-tank weapons, but our poor bloody infantry have stood up to iron and steel.’ But fierce as the Germans’ resolve was, they could achieve no more than a holding action. By the standards of the North African campaign, the Germans’ losses were calamitous. ‘In the Wehrmacht report, my regiment was referred to by name: “Grenadier Regiment 754 particularly distinguished itself,”’ wrote Lance Corporal Karl B. two weeks later. ‘There isn’t much of the unit left now.’ By early May, the Tunisian campaign, and with it the German army’s war in North Africa, were over. Around 250,000 Axis troops went into captivity. Rommel, already back in Germany, was not among them, though Arnim was.

The end of the North African campaign, like the campaign as a whole, was more than a sideshow. More Axis troops surrendered in Tunisia than had surrendered in Stalingrad, even though only about half the 250,000 captured were combat troops, and only half the combat troops were German. The British army in particular had used the North African campaign to improve its tactics and organization, while the US army had used its final phase as an opportunity to begin tempering its troops in battle. Moreover, the Americans’ effective use of artillery presaged the overwhelming firepower that they and the rest of the Western Allies would employ in future campaigns. Both the British and US armies, then, had benefited greatly from North African ‘rehearsal space’.

The campaign’s closing phase also further exposed the new limits to the German army’s capability. Above all, its mastery of manoeuvre warfare could only achieve so much against an opponent with superior intelligence, air power and land-based firepower. Strategically, the German army now faced a likely Italian collapse and an Allied invasion of Axis-controlled Europe from the south. Axis hopes of a complete triumph in North Africa had been based on shaky foundations from the start, but equally, the Axis need not have been defeated quite so massively as it was. That the German army lost so many men and so much valuable equipment in Tunisia was ultimately the fault of Hitler and the high command, albeit the OKW rather than the OKH this time. Hitler had made his small OKW staff, particularly General Jodl, responsible for the Tunisian bridgehead, largely as a way of further putting the OKH more firmly in its place. Given the pressure the German army was under on the eastern front in early 1943, it is questionable how many more troops could have been spared for Tunisia. But the OKW could at least have done a better job of timing the reinforcements, still more of timing a withdrawal, the disruption from Allied air power notwithstanding. Ultimately, however, nothing the OKW might have done differently would have altered some even more basic truths about the Tunisian campaign. The task of supplying and coordinating a binational expeditionary force by sea was not one that naturally fitted the German military. It fitted even less when that same sea route was exposed to air attack so devastatingly. Yet the only alternative – conceding the field to the Allies in North Africa and allowing Italy to collapse – was one Hitler would not countenance.

Posted by Mitch Williamson at 5:41 PM