Africa Korps in the Desert 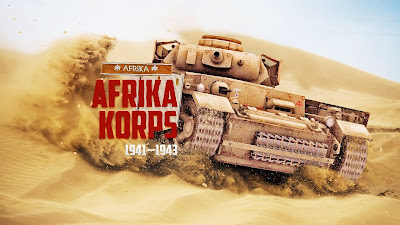 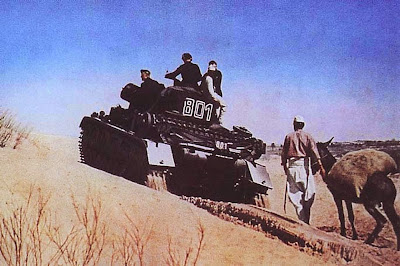 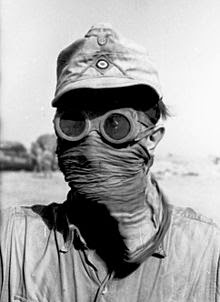 The war was fought in North Africa, primarily in the rocky desert plain of Cyrenaica, modern day Libya. From the coast of North Africa extending inland lies a raised, flat plain of stoney hard desert that runs 200 to 300 km in depth until the great dunes of the Sahara are reached. The war was largely fought in this region. Traversed by the nomadic Bedoins, the region is sparsely populated. The ground is a flat, hard scrabble with little or no cover, and difficult for infantry to dig into. Conditions in the desert were harsh: miserably hot during the day, while temperatures dropped precipitously at night. The great coats of the German soldier were not discarded, nor were scarfs, which were used not only for the cold of the desert night, but for the sand storms that were frequent and blinding. Sand storms made flying impossible, and travel by land difficult. Navigation was by compass, and each man had one. It was easy to become lost in the desert, and hard to be found again. The sand storms could last from a few hours to several days at a time. Sand would creep into everything, and was very hard on equipment. Replacement parts were essential.

Trucks were fitted with special oil filters. Aircraft had heavily modified air intakes fitted. British built trucks were more rugged and durable in the desert than German or Italian vehicles. At times, as much as 85% of the transport in the Africa Korps was British built. Of course, this meant that spare parts for the trucks the Germans were using were hard to come by. To fight an armoured war in the desert, the two essential provisions were fuel and water. Neither of these were readily available. They had to be brought forward to the combat units, and husbanded carefully. Only the Bedoins knew where to dig in the desert for water. Beyond these difficulties, the hardest thing for the men to deal with were the flies. The millions of flies got into everything, could not be escaped and got into the food stores, making eating difficult. They also carried disease. Illness amongst the Afrika Korps was a major issue. On the British side, a variety of foods were supplied in tins. For the Germans, food was monotonous and available unevenly. Between the disease, the unvaried diet and the strain of combat, soldiers in the Axis camp typically became quite thin.
Posted by Mitch Williamson at 12:44 AM