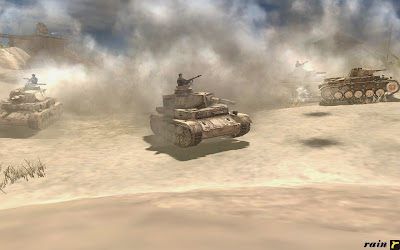 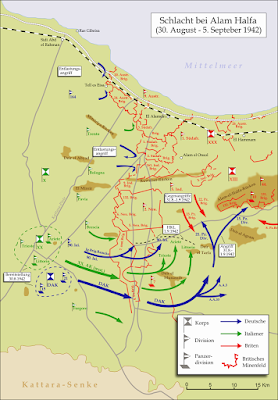 Commencing on August 31, 1942, a month after the German Panzerarmee Afrika was checked at the Battles of El Alamein, Alam el Halfa was Erwin Rommel’s final attempt to break through to the Nile valley in continuation of his frustrated drive across Cyrenaica and western Egypt. Leading the British Eighth Army, Gen. Sir Bernard Law Montgomery deployed his forces near Alam el Halfa, an east-west ridge astride Rommel’s path of advance. On the first day of battle, three German armored divisions defeated British forces, turning the Eighth Army’s southern flank. However, Montgomery rallied an extraordinary defense—considered by military historians a textbook example of the modern repulse—and, coordinating armor and infantry with air and artillery support, stopped Rommel at the ridge. By the fourth day of the battle, Rommel had been forced into retreat, redeploying his armor in a defensive line running north and south. The battle was over by September 7, by which time Rommel, checked again, had lost significantly more than the 1,750 casualties (killed and wounded) suffered by the Eighth Army.

North African battle between German Field Marshal Erwin Rommel’s Afrika Korps and British Lieutenant General Bernard Law Montgomery’s Eighth Army. Fearful that he would permanently lose the initiative to the Eighth Army after his advance was halted at the First Battle of El Alamein in July 1942, Rommel reorganized with the intention of resuming his advance toward Suez. Meanwhile, Montgomery assumed command of the British Eighth Army on 13 August and began planning for the offensive, all the while expecting Rommel to attack first.

Late on the evening of 30 August, Rommel attempted, as at Gazala, to get around Eighth Army’s left flank although his force was weak in armor. With diversionary attacks designed to hold British forces along the coast, Rommel ordered the Afrika Korps east and south of Alam Halfa Ridge with the aim of swinging north to the Mediterranean coast behind Montgomery and enveloping the Eighth Army.

The Eighth Army had established a defense in depth, including strong positions on the Alam Halfa and Ruweisat Ridges, and Montgomery rejected any withdrawal. The 10th Armored Division, 22nd Armored Brigade, and 44th Division defended Alam Halfa, while the 7th Armored Division was south of the ridge. Montgomery ordered his armored units to defend from their current positions rather than advancing to meet Rommel’s Panzers.

Slowed by British minefields and fuel shortages, Rommel’s tanks did not reach Alam Halfa until the evening of 31 August. Daylight brought vicious Desert Air Force attacks against the Axis advance, and the 7th Armored Division’s placement forced Rommel to swing north prematurely, into the teeth of a tank brigade on Alam Halfa Ridge. Fuel shortages prevented the Afrika Korps from outflanking Alam Halfa to the east, forcing Rommel onto the defensive there.

On 1 September, after a flank assault on the 22nd Armored Brigade failed and having suffered severe losses, Rommel ordered his forces to retire to their original positions. The withdrawal, which began the next day, exposed the Afrika Korps to further devastating British aerial attacks. Rommel repulsed a counterattack by the 2nd New Zealand Division on the evening of 3 September, and Montgomery believed that he lacked the resources to force a general Axis withdrawal, so he decided not to press his advantage for the time being. Certainly Rommel’s past successes made Montgomery wary of pushing too far forward.

Montgomery had fought his first battle as commander of Eighth Army with great skill. Rommel now had no choice but to go on the defensive. He established positions between the Mediterranean and the Qattara Depression as both sides prepared for the Eighth Army’s upcoming offensive: the Second Battle of El Alamein.

Historically, the victory here is significant as an outstanding instance of ground-air coordination and the exploitation of intelligence. British breakthroughs in the decryption of the enemy’s coded communication proved crucial to the triumph at Alam el Halfa. On August 15, 1942, Rommel, using the Enigma cipher, transmitted his plan of action—to effect a breakthrough to Cairo and the Nile—to Adolf Hitler. Within 48 hours, Montgomery had a decrypted translation of this message. Learning that Rommel intended to move south around the end of the British line, then strike the British flank to cut off the Eighth Army from its base and supplies, Montgomery was able to deploy his forces at the Alam el Halfa ridge and check the German advance.