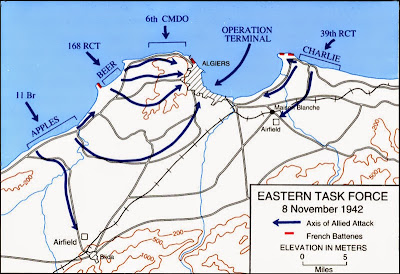 Eastern Task Force had dropped anchor off Algiers in the last hours of 7 November. Of the three TORCH task forces, Eastern included the largest British proportion. Not only were naval and air support British; so were 23,000 of the total 33,000 troops. The 10,000 U.S. Army troops landing at Algiers would consist of Col. Benjamin F. Caffey, Jr.’s 39th Regimental Combat Team from the 9th Infantry Division; and Col. John W. O’ Daniel’s 168th Regimental Combat Team and Lt. Col. Edwin T. Swenson’s 3d Battalion, 135th Infantry, both from the 34th Infantry Division. These American units and all British Army units in the initial landing were under command of U.S. Maj. Gen. Charles W. Ryder. Naval support included a Royal Navy flotilla of 3 aircraft carriers, 4 cruisers, I antiaircraft vessel, 7 destroyers, and 15 transports. Enemy strength was estimated at 15,000 troops with only obsolete tanks, 91 fighters and bombers at two airfields, 12 coastal batteries, and a few destroyers in the harbor.

Both the geography and concept of operations at Algiers closely resembled those of Oran. The city lay in an arc of beaches and bluffs gradually rising to low hills ten miles inland. Allied troops were to land at three points along a fifty-mile stretch of coast: Beaches APPLES and BEER lay west of the city, Beach CHARLIE east. After clearing the beaches, the troops would take all roads, villages, and two airfields; then converge behind Algiers; and move on the city from three sides.

Landings in the Algiers area met mixed success. The British 11th Infantry Brigade Group came across Beach APPLES on time and without mishap, the smoothest of all TORCH landings. By 0700 the unit had moved twelve miles inland and taken its objective, Blida airfield. But at Beach BEER a variety of problems—high surf, boat crew inexperience, absent beach guides, engine failures—scattered the 168th Team over fifteen miles of coastline and delayed the British 6th Commando over five hours. Fortunately, landings at APPLES and BEER were unopposed. At Beach CHARLIE, however, coastal batteries fired on transports as the landing craft neared shore. Naval gunfire responded, but then high surf scattered 39th Regimental Combat Team boats, smashing some against coastal rocks. Leaving the boats, most troops found, instead of gradually rising ground, a vertical bluff with stairs cut for sightseers. Overcoming all these difficulties, the troops of the 39th Team moved eight miles inland and took the airfield at Maison Blanche by 0830. But for the rest of the day a fierce battle raged with a French marine artillery battery. Royal Navy surface and air units eventually prevailed, though Axis bombers managed to damage a transport and destroyer.

As at Oran, the British insisted on an antisabotage mission into the heart of the objective area. Operation TERMINAL called for Colonel Swenson’s 3d Battalion, 135th Infantry, to enter Algiers harbor on two Royal Navy destroyers, debark, and secure port facilities for future Allied operations. As the two ships moved toward the bay at 0140 on D-day, TERMINAL began to resemble the RESERVIST disaster at Oran. The first ship soon drew a searchlight beam, then hostile fire which drove it back to sea in flames with thirty-five casualties. Ignoring its sister ship’s fate, the other vessel ran through the intense fire, tied up along a breakwater, and debarked Swenson and half of his battalion. By 0800 the troops had secured several objectives and seemed on the verge of success when the ship, waiting for their return, came under fire. A few men made it aboard as the ship pushed off, but the rest of the unit was surrounded. When Swenson was forced to surrender his force seven hours after entering the city, TERMINAL ended in failure, though with fewer casualties than RESERVIST at Oran.

Algiers presented the Allies with more than military objectives. As headquarters for French forces in all of North Africa, the city incorporated a political character which Allied commanders did not find at other landing sites. Since the fall of France this political aspect had become especially tangled, with the French military deeply fragmented and local commanders promoting various responses to TORCH. For Allied commanders on the ground Algiers was a political maze in which a turn toward one French unit might result in a champagne reception while a turn in a different direction might land one in a deadly firelight. This confusion manifested with frustrating clarity for the 168th Regimental Combat Team on its seven-mile advance from Beach BEER to Algiers. On the morning of D-day Colonel O’ Daniel’s men were met by French troops openly assisting the advance. But around noon the pro-American French commander was replaced by a pro-Nazi officer, and the 168th found itself receiving intense fire from soldiers of the same French units.

Amid confused action in the field, negotiations for a cease-fire continued. On D-day a representative of President Roosevelt had delivered a message to Marshal Petain in Vichy requesting cooperation with all Allied landings. Under close Nazi supervision, Petain had to refuse but authorized Admiral Jean Francois Darlan, commander of all French forces, to act as he saw fit. Darlan let the invasion continue until further resistance was hopeless, then allowed his deputy at Algiers to meet General Ryder. Algiers was the first of the three TORCH objectives to put a cease-fire into effect, at 2000 on 8 November. Unfortunately, the agreement there did not apply to other areas. French headquarters in Oran agreed to a separate cease-fire only at 1215 on 10 November. At Casablanca, however, the French did not send out a cease-fire order until 1910 on the 10th, and sniper fire continued for days after. The successful end to TORCH brought much relief to Washington and London but left American and British commanders suspicious about the potential of the French as battlefield allies.
Posted by Mitch Williamson at 12:16 PM