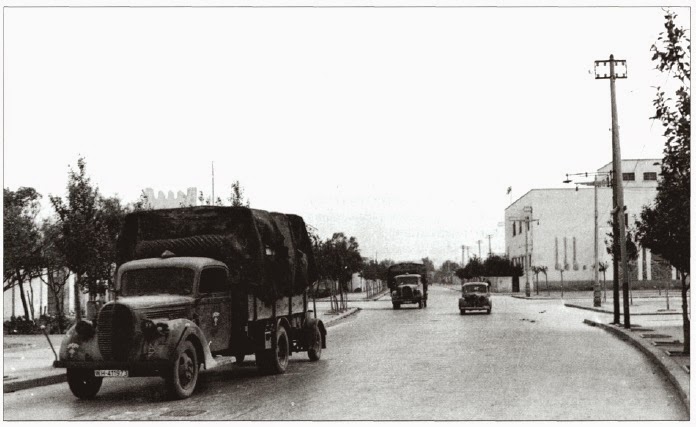 A DAK column moving across the streets of a Libyan town. The lorries, all sporting a neat 'palm with swastika' DAK insignia, appear to be still painted in the European dark-grey finish and only have a light coat of sand. The tactical insignia on the left mudguard is a divisional symbol.

The DAK was far from being an elite unit in early 1941. Though fully motorized, both divisions sent to North Africa had many drawbacks. The first unit sent, 5.leichte Division, was a hotchpotch of different units designed to serve in a defensive role. The unit that followed, 21.Panzer Division, was an armoured division at nearly full strength, but had only recently been transformed from an infantry division and lacked any real experience of armoured warfare. These drawbacks did not overly concern the German Army High Command, the Oberkommando des Heeres (OKH), as it only sought to fight a delaying action in North Africa until the conclusion of Operation Barbarossa - the invasion of the Soviet Union. A limited attack aimed at regaining Cyrenaica was authorized, but only after 15.Panzer Division arrived and the German troops had been properly trained and acclimatized. A major assault against Egypt was not envisaged until after the war against the Soviet Union had been brought to a satisfactory conclusion, probably by the end of 1941.

Rommel's bold sweep across Cyrenaica thwarted these plans, but the OKH could not adjust to the new reality as the Eastern Front was in desperate need of motor transport in general and mechanized troops in particular. Thus, in summer 1941 the DAK was stuck in a stalemate and, unsurprisingly, allowed the bare number of reinforcements by the OKH. The situation did not change much in 1942 despite Rommel's second drive into Cyrenaica, as both Hitler and the OKH were still gravely concerned about the difficult situation on the Eastern Front. As a consequence the Mediterranean remained a sideshow, although there was an overall strategic plan. This involved an assault aimed at the seizure of the port of Tobruk, which was to be followed by an invasion of Malta with the aim of bringing the supply problems to an end.

However, this plan did not take into account Rommel's new advance, this time into Egypt. Although there were no significant reinforcements available for the OAK, the OKH did try to improve the quality of its weaponry. For the first time the German Army sought to make good its shortcomings using improved weaponry and better balanced combat units - the 'fewer men, more weapons' solution. However, Rommel's unexpected successes at Gazala and Tobruk compelled Hitler to authorize a premature advance into Egypt. The result was that, by the end of July, for the first time a strained DAK faced a severe crisis and was in real danger of breaking down. As a consequence new reinforcements were brought in, although it was too little too late: having failed to break through the British defences at El Alamein, the DAK had no other choice but to stand on the defensive and wait for the enemy offensive to be unleashed.

Always under strength and plagued by a perennial lack of weapons, vehicles and supplies, the DAK was nevertheless in better shape than many other units of the German Army. In many cases its equipment included modern weapons that were not available in large quantities. Though lacking in numbers, in early 1941 its tank inventory did not include any of the obsolete Czech tanks that were used on a large scale against the Soviet Union. Also, in 1942 it was supplied with some of the most modern weapons available. All in all, the DAK often fielded more and better weapons, vehicles and equipment than many of the motorized units on the Eastern Front. Such an odd state of affairs was remarked on by the OKH which pointed out how DAK's allocation of motor transport was 1/10th of that available for Barbarossa, while its actual strength was only 1/78th of the force committed to the invasion of the Soviet Union. A remarkable point that clearly shows how the DAK, in spite of its many shortcomings, established itself as an effective fighting force and a perfect prototype for fully motorized units.
Posted by Mitch Williamson at 12:26 PM