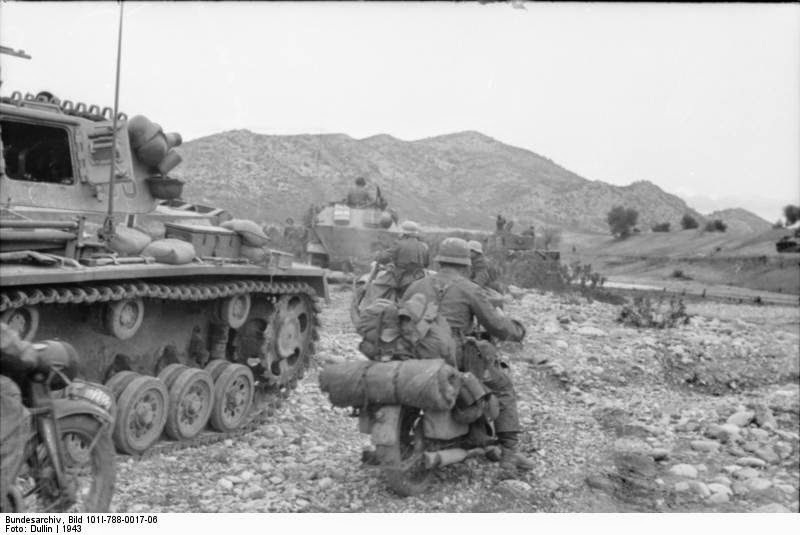 The request of the Commander-in-Chief South to the German Army High Command to create a field-army headquarters for Northwest Africa was granted. Generaloberst von Arnim arrived at the Führer Headquarters in Rastenburg on 3 December, where Hitler personally briefed him on the situation. In a conversation with Generalfeldmarschall Keitel that followed, the latter promised von Arnim three armored divisions and three motorized rifle divisions in short order.

On 6 December, when Generalmajor Gause and Oberst von Manteuffel arrived in Bizerta, they informed Nehring that they had brought an ultimatum from Hitler with them for Admiral Dérrien, the French commander in Tunisia, to lay down his arms, surrender his forts, and discharge his soldiers. If the French commander turned down that demand, Gause was authorized to use force to make it happen.

Generalmajor Gause brought another bit of news. He informed Nehring that von Arnim would soon be taking over command in Tunisia and that he would be arriving in Tunis around 8 December. In fact, von Arnim did arrive on 8 December.

Nehring had continued his preparations for a continuation of the attack on 9 December. While that attack was launched, Nehring announced to his forces that he was taking his leave of them as Commanding General of the XC. Armee-Korps. That same morning, the special operations against the French forces in Bizerta were conducted. Gause succeeded in convincing Dérrien that the spilling of any blood would be senseless. Dérrien and his forces were allowed to keep their weapons until 1700 hours and strike their flags with full military honors.

Events unfolded at other French bastions similarly. The French forces in Ferryville surrendered, as did their naval vessels at anchor outside Ferryville and Bizerta.
#
The German attack on 9 December, spearheaded by the 10. Panzer- Division, rolled out as planned and was successful. The enemy armored forces, which had advanced far forward, were thrown back. The situation in the bridgehead stabilized further. The German armored forces initially reached the area around Toum, southwest of Tebourba. By that evening, lead elements were three kilometers northeast of Medjez el Bab. The paratroopers of Fallschirmjäger-Regiment 5 went forward and established defensive positions in the area north of the salt lake at Sebchet el Kouriza at a farm. It was later referred to as the “Christmas Farm.” A German 5-centimeter and two Italian antitank guns were established along the road to Goubellat.

The 10. Panzer-Division and the Superga Division moved to the left wing of the Axis positions in Tunisia, establishing themselves on a line running along Pont du Fahs–bottleneck north of the Djebel Saidar–bottleneck southwest of the Djebel Garce (15 kilometers west of Enfidaville)–southwest edge of the lake south of Enfidaville.

The various attacks by the Allies on 23 and 24 December were turned back by Fallschirmjäger-Regiment 5.

Kampfgruppe Bürker, named after Oberstleutnant i.G. Bürker, the operations officer of the 10. Panzer-Division, successfully launched an attack against “Christmas Mountain” on 24 December in unbelievably tough fighting against the trench lines of the British 78th Infantry Division. The next morning—- Christmas Day—General Evelegh committed his Guards Brigade against the hill, which the British referred to as “Longstop Hill,” which then again changed hands.

At the same time, tanks of the British 6th Armoured Division advanced on Massicault on the right flank and took it. The Northants Infantry reached the Tebourba Plateau. It looked like the Allies would launch another raid against Tunis.

At the moment, the weather intervened in favor of the Germans. A winter rain started and, two hours later, all of the vehicles were stuck in the seemingly bottomless mud. On 26 December, Oberstleutnant Bürker tried to take back “Christmas Hill.” His battle group took the first three hilltops in quick succession. The remaining three hilltops had to be taken in hard hand-to-hand combat against the dug-in enemy, however. After the dramatic fighting, 500 English surrendered. The hills, which secured the Tunis Bridgehead to the west, were again in German hands.
#
On the Allied side, 24 December had been earmarked for an attack. When General Eisenhower arrived at Souk el Khemis, the headquarters of the British V Corps, the Commanding General reported that the preparatory attacks were underway as well as a feint on Goubellat. He added that the rain was making things difficult, however.

Eisenhower, not quite convinced of Allfrey’s optimistic report, headed for the front in the pouring rain. He quickly became convinced that no attack could be conducted in the mud porridge that he was trying to navigate through. He had the U.S. II Corps, which was still in the greater Oran area to move forward to the area around Tebessa. Major General Fredendall was to have the 1st Armored, the 1st Infantry, the 9th Infantry, and the 34th Infantry Divisions—all U.S. formations placed under his command. As soon as the U.S. corps had staged in the south, it was to advance in the direction of Sfax and Gabes in order to block the retreat route of Panzer-Armee Afrika.

On the German side, the bridgehead of Tunisia had been divided into four defensive sectors at the end of December: A (area around Mateur under Gruppe von Broich); B (area around Medjez el Bab under the 10. Panzer- Division); C (area to the south of Tunis under the Superga Division); and D (area around Sfax and Gabes under General Imperiali’s “Brigade L”).

The Luftwaffe had destroyed the bridge over the Medjerda at Medjez el Bab. That held up the Allied supply columns considerably.

On 31 December 1942, the situation had stabilized for the Germans somewhat. The recently formed 5. Panzer-Armee had 103 Panzer III’s and IV’s and 11 Tigers at its disposal. In addition, Panzer-Abteilung 190 had another 53 tanks, and it was making its way to Kairouan. In the meantime, nearly the entire 334. Infanterie-Division had been transported to Africa.

The heavy rainfalls in January barely allowed any troop movements, with the result that the front lines became solidified. It was only in the south in the sector of the Superga Division that there were any operations. The French XIX Corps of General Koeltz with its three divisions and a brigade attacked from the area around Tebessa. Without anyone initially opposing it, the French corps was able to advance as far as the valley outlets to the east. But its offensive never really went anywhere.

On the German side, an attack was launched from the area around Pont du Fahs with the Codename “Courier I.” The attack was launched in the middle of January towards the southwest and placed under the overall command of Generalmajor Weber, the commander of the 334. Infanterie- Division. In addition to his division, Weber had elements of the 10. Panzer- Division, schwere Panzer-Abteilung 501, two batteries of additional artillery, and Pionier-Bataillon 49. The main formation from the 334. Infanterie-Division was Gebirgsjäger-Regiment 756.

A supporting attack was also launched to the south by Infanterie-Regiment 47, which also had Italian formations in support.

The attack started on the morning of 18 January. A French Foreign Legion Regiment at the Djebel Solbia was defeated. Kampfgruppe Weber then advanced against the Djebel Mansour, which could not be taken in the first assault. The French, who had been reinforced with tanks from the U.S. 1st Armored Division and additional artillery, slowed down the German advance. There was bitter fighting south of the Djebel Chirich, which the Germans were able to decide in their favor. Djebel Mansour was taken, but the British Guards, who were inserted into the line, retook the position.

The mountain troopers of the 334. Infanterie-Division under Oberst Lang counterattacked and retook the hill. It was then held against several enemy attacks.

The German advance then continued in the direction of Pinchon. Infanterie-Regiment 47 of Oberst Buhse attacked into the village and took it. The German forces were soon forced back, however, when the enemy attacked with superior forces. The German infantry pulled back to the high ground east of the village.

After 48 hours of bitter fighting, the main effort of Weber’s forces reached Ousseltia. The French forces were scattered. More than 2,000 soldiers of the Oran and Constantine Divisions were taken prisoner.
Posted by Mitch Williamson at 12:44 PM