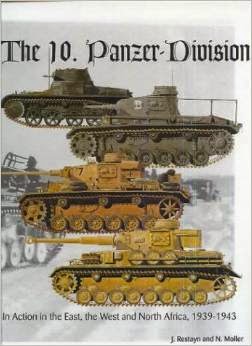 This photo album presents the history of the division through a brief text, hundreds of photographs, several maps and numerous custom color illustrations. This book offers the first account in English of this battle-proven division, which was formed shortly before the outbreak of the war. It fought in Poland, France and in the opening stages of the campaign in Russia. In mid-1942, it was pulled out of the line, reconstituted and reorganized in France and then sent to North Africa as part of Hitler’s desperate attempt to save the situation there. Although the division spent only six months in the desert, it fought both the British and the Americans. It gave the "green" American Army a bloody nose in some of its first encounters with the Germans, including the legendary fighting at Kasserine Pass, before it had to bow to defeat and capitulation at Tunis in May 1943. Although the division had a proud and successful history, it was never reconstituted.
Authors J. Restayn and N. Moller have brought this division to life with over 450 black and white photographs that chronicle the division from its formation to its demise. Hundreds of unpublished photographs from veterans of the division are coupled with breathtaking combat photography from French and German archives. In addition to the pictorial coverage, the reader is treated to a concise account of the division’s history, maps of all of its major campaigns, numerous tables of tank inventories and order of battle along with 34 pages of full-color illustrations, including two pages of color photographs. J. Restayn has superbly illustrated virtually all of the combat vehicles and artillery pieces of the division, as well as most of the armored personnel carriers, armored cars and soft-skinned vehicles it used throughout its 44-month history. In addition, there are numerous renderings of some of the armored vehicles the division encountered during its campaigns.

The 10.Panzer-Division is probably one of the few, if not the only, division to fight in such varied terrain and climatic conditions in so short a time - 4 different campaigns/theaters in 44 short months! It began in 1939 against Poland, followed quickly by the invasion of France (May 1940, when it temporarily had two Panzer Regiments - 7 & 8), then turned around to head East again to participate in Barbarossa (June 1941 with only Panzer Regiment 7; 8.PzRgt was sent to Africa as part of the 15.PzDv), and then at the end of 1942 was sent to Africa to help the becoming-beleagured Deutches Afrika Korps, acquiring and absorbing into its ranks the first company of Tigers (schwere.Panzer-Abteilung 501).There, along with the DAK (and its old original regiment, 8.PzRgt) the 10.PzDv met its end in Tunisia in May 1943.

Restayn and Moller have done an outstanding and fantastic (is that redundant?) job at compiling this hardcover photo ablum documenting the history of the 10.PzDv. There are countless B&W photos from cover to cover, giving a wealth of information for any modeller or gamer (or just general WW2 historian!). Each campaign/theater starts with a breakdown of what the division was comprised of at that time, including how many of what (basic) types of tanks each company had (basic types, i.e., Pz IIIs, Pz IIs, Pz IVs - almost no differentiation is noted in these lists of the ausf. of the panzers; some of that material can be gleaned from the photos that follow). There are photos taken from both the Germans and Allies in this book, of both functional and non-functional vehicles and guns. The final 30-odd pages of the book are color illustrations, along with a few color photographs at the very end.

Posted by Mitch Williamson at 12:50 PM

Email ThisBlogThis!Share to TwitterShare to FacebookShare to Pinterest
Labels: Book