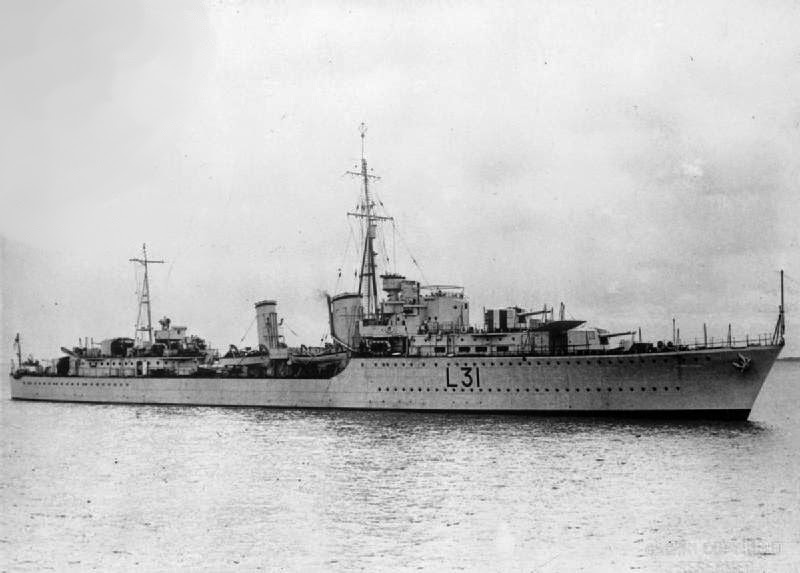 Frederick Baker was on board HMS Mohawk on 15th April:

Whilst in the area of Malta our Flotilla was given another task and this was to try and stop the supply ships of the enemy reaching North Africa, which was now becoming the scene for the important battles between Montgomery [original account - Montgomery did not arrive until 1942] and Rommel. As you can imagine it was very dangerous for our ships to be caught at sea during daylight because of the superiority of the enemy planes, so we would leave Malta at dusk, do a wide sweeping search and rush back to Malta before dawn. On one of these occasions just as we were turning for home one of our ships sighted the enemy. We instantly engaged them in battle and after a short while we had successfully sunk the complete convoy of five troop or supply ships together with the three Escorts.

Unfortunately for me, my ship the Mohawk was hit by a torpedo which immobilised us causing considerable damage in the engine room and causing us to stop. We then became a sitting target and in a few moments we were hit again. This time we started to sink rapidly, so we had to abandon ship. After swimming away as fast as possible for a period, which seemed like hours, although in fact was only a few moments, I turned and saw the outline of the stern of the ship disappear under the water. I now became very frightened seeing many men in the water trying to cling to any debris they could find. I saw fairly close by one of our life rafts and struck out to reach it. I was recognised by some of my ship mates and was hauled on board. We then were miraculously spotted by one of our ships which was looking for survivors and I finished up on board HMS Nubian which coincidentally was the ship my elder brother [Charlie] was on, so it became a happy reunion for me.

Supplying the DAK with its constant need for rations, fuel, weapons, and ammunition proved to be extraordinarily difficult and constantly insufficient from the very beginning. A sea dominated by the enemy lay between the sailing ports of the transports and their destination harbors. The enemy employed three submarine flotillas in the Mediterranean, and their effectiveness was enormous.

There were approximately 80 ships available in North African, Mediterranean, and Italian ports to meet the supply needs of the DAK at the start of the German engagement in Africa. Most of the ships were in the latter ports. Initially, they had to supply “only” two divisions and a few special-purpose formations. They needed to transport the supplies, personnel, and equipment to the port of Tripoli and unload them there. They then had to be loaded onto trucks and transported to the front. As the German and Italian forces advanced to the east, the distance to the front became longer on an almost daily basis.

The senior quartermaster officer for Africa was Oberstleutnant Graf Klinkowström. He organized his logistics support forces into three supply columns, each with a lift capacity of 360 tons. There were also a few Italian truck elements available to transship the materiel from Tripoli to the supply depots around the city. The logistics officers of the 5. leichte Division and the 15. Panzer-Division had their columns pick up the supplies from there and take them to a depot that was established nearer to the front at the Arco dei Fileni. The light division needed 320 tons daily just for its needs.

Above and beyond that, there were the needs for water, which had to be brought forward in tanker trucks. In order to get the monthly 9,000 tons needed for the light division from Tripoli, some 670 kilometers away, it would have required a far greater capacity than ever existed. Every column that made the round trip to the Arco dei Fileni required 6 days in all for the journey. That meant that the one column of vehicles that was available to the light division was only able to bring forward 1,600 tons of the 9,000 required.

For that reason, coastal water traffic, consisting of vessels of all sizes and capacities, was quickly organized and employed. That helped somewhat.

With the shift of the front to the area around Tobruk and then Bardia, the distances to the front from the main port of supply climbed to 1,500 kilometers and beyond. The quartermaster had most of his lift capacity organized to go to Bengasi, where it would then be loaded onto coastal craft for the continued trip to Derna.

The coastal waterway traffic was constantly disturbed by submarine and RAF activity, however. It was only the Italian submarines, which set course for Africa from lower Italy that made it without a problem. They would bring 80 tons of tank main-gun ammunition or 140 tons of fuel.

The first two convoys made it through with personnel unscathed, but next one saw a German steamer with 5,608 registered tonnage lost. From January to May 1941, 11 German supply ships with a total freight capacity of 42,000 registered tons were lost.

The first really heavy blow to the German supply effort was delivered by Force “K”—four destroyers—on the evening of 16 April. Near the island of Kerkennah, the British force encountered an Axis supply convoy consisting of the freighters Adana, Aegina, Arta and Iserlohn. The Axis force was escorted by three Italian motor-torpedo boats. All four freighters were sunk and more than 3,000 DAK soldiers swam in the waters of the Mediterranean for their lives. The Italian vessels fought in an exemplary fashion under Commander Cristofaro and were able to sink the British destroyer Mohawk. The Italian boats spent the rest of the night fishing shipwrecked German soldiers from the waters and calling for help. In all, some seven motor-torpedo boats, two hospital ships and a few amphibious aircraft were involved in the rescue operations.

The rescue effort was able to pick up 1,248 German soldiers. The rest were claimed by the sea. It was a heavy blow to the DAK.
Posted by Mitch Williamson at 12:35 PM

Email ThisBlogThis!Share to TwitterShare to FacebookShare to Pinterest
Labels: Naval