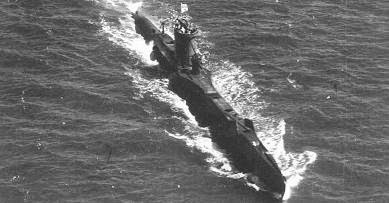 HMS P.33 - U-class Submarine sister-boat HM S/M Unrivalled
Another of the unnamed submarines completed in May 1941 and deployed in the Mediterranean where she arrived to join the 10th Submarine Flotilla in June 1941.

In an early patrol she sank the Italian mercantile BARBIAGO off Pantellaria which was part of a five ship convoy escorted by three destroyers and three torpedo boats. Although under heavy depth charge attacks by the escort, the submarine was able to escape. Later on 12th August she was deployed to join HM Submarines P32 and UNIQUE to intercept an Italian troop convoy on passage to Tripoli. Whilst patrolling west of Tripoli she came under attack by anti-submarine vessels after which no contact could be made. Depth-charged and sunk by Italian torpedo boat Partenope off Pantelleria 18th August 1941.

On 3 June 1941, two Italian convoy ships were sunk by British bombers. The Italian submarines Zoea, Corridoni, and Atropo brought additional fuel to Bardia. The journeys by those submarines must be considered among the most dangerous of the entire war.

Of the two convoys that set out for Africa in the middle of July, a ship was sunk in the first convoy by the P 33 of Lieutenant Whiteway-Wilkinson. The attack by the submarine Unbeaten on a ship of the second convoy missed by a hair.

The bombers that flew those attacks were based on Malta. The submarines of the British 10th Flotilla were based in Malta’s harbor. They would lie in wait at the forced crossing points. Malta was a thorn in the flesh of the Axis forces in Africa.

From June to the end of October, 40 ships were lost at sea. After the arrival of the 15. Panzer-Division in July, the monthly supply requirements for the Army rose to 30,000 tons, with a further requirement for 20,000 tons in reserve. In addition, the Luftwaffe needed 8,000 tons. For the offensive planned in November, it was estimated that 24,000 tons would be needed in Tripoli and 35,000 tons in Bengasi. The situation at sea continued to worsen, however. The negative trend ran from October through December. The lack of supplies for the DAK took on menacing dimensions. In October, around 50,000 ton of supplies were sent to Africa. Of that amount, approximately 63% was sunk. Of the 37,000 tons that were loaded on ships in November, only 23% reached their ports of call. All the rest was sunk from the air or by submarines.

Despite the almost superhuman efforts of the German and Italian sailors and the coastal waterway traffic, the needs of the DAK for its attack on Tobruk were only 40% met.
Posted by Mitch Williamson at 12:39 PM

Email ThisBlogThis!Share to TwitterShare to FacebookShare to Pinterest
Labels: Naval