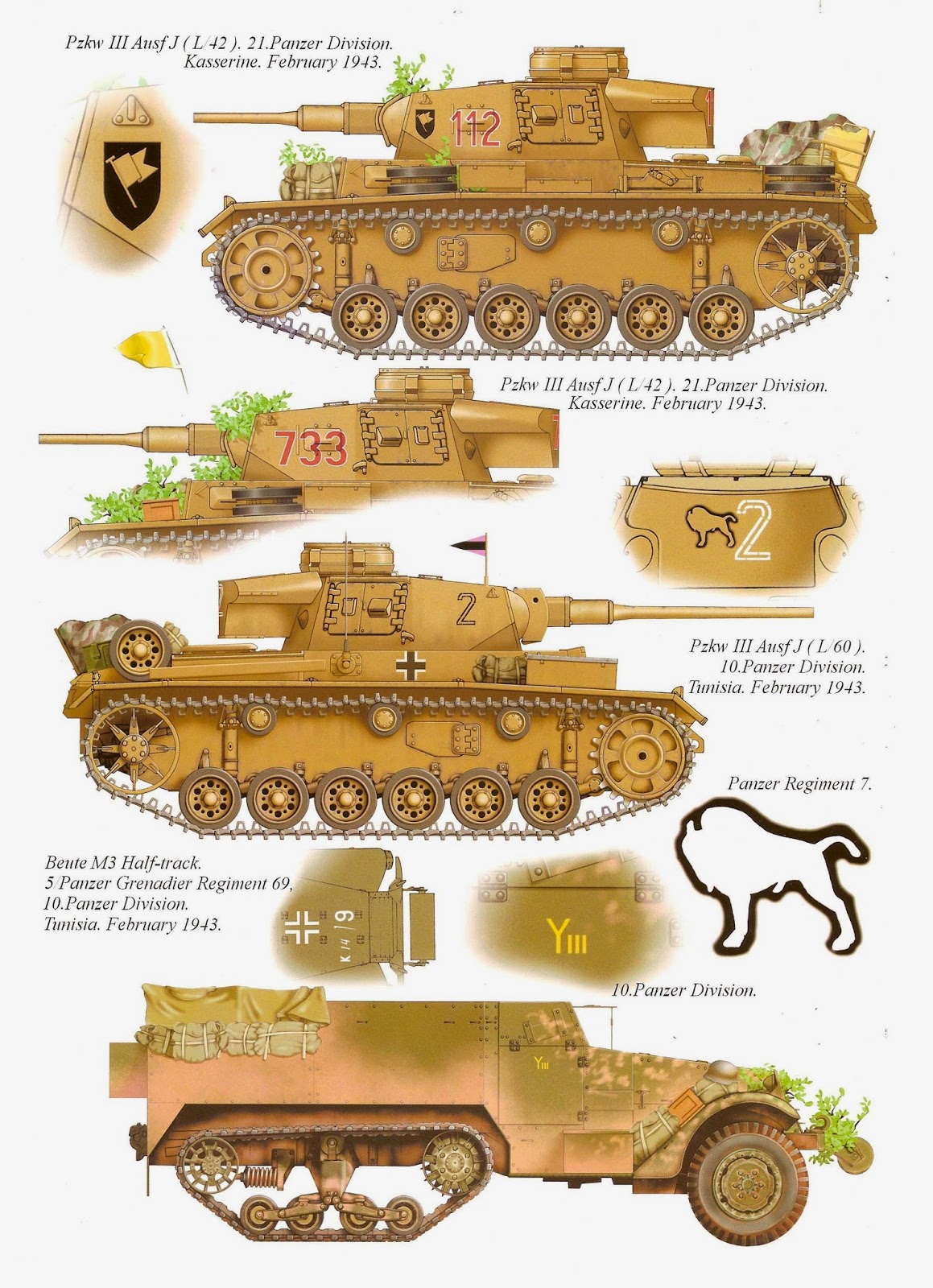 
The 10.Panzer-Division was also ordered to Tunisia in response to the Allied landings in French North Africa. The bulk of Panzer-Regiment 7 landed in Tunis in the period from 27 November to 5 December 1942. Ships carrying most of the 5.Kompanie and 8.Kompanie were sunk on 3 December 1942. In total, 2 Pz.Kpfw.lI, 16 Pz.Kpfw.lIl, 12 Pz.Kpfw.lV, and 3 Pz.Bef.Wg. were lost in transit out of the original 21 Pz.Kpfw.ll, 105 Pz.Kpfw.lll, 20 Pz.Kpfw.IV and 9 Pz.Bef.Wg. shipped with Panzer-Regiment 7.

In addition to the Panzers sent to Tunisia with the units, from 1 November 1942 to 1 May 1943 a total of 68 Pz.Kpfw.1I1 and 142 Pz.Kpfw.lV had been shipped to North Africa as replacements, of which 16 Pz.Kpfw.1I1 and 28 Pz.Kpfw.lV were reported as having been sunk in transit. But these reinforcements were insufficient to deal with the combined tank strength of the American and British forces. Worn down by attrition (only 44 Pz.Kpfw.lIl, 25 Pz.Kpfw.IV and 1 Tiger were reported as operational in the last strength report compiled on 4 May), the last of the Panzer units had surrendered in Tunisia by 13 May 1943.

The 10th Panzer Division was first formed on 1 April 1939 in Prague, as a composite unit made up of previously established units throughout Germany. Many of these units were transferred from the 20th Motorized Division, the 29th Motorized Division, and the 3rd Light Division. By fall of 1939, the division was still forming, but was nonetheless committed to the 1939 Invasion of Poland before the process was complete. For that reason, the 10th Panzer Division remained in reserve for most of that campaign. It was moved from Pomerania in August into Poland, where it was hastily given control of the 7th Panzer Regiment, the 4th Panzer Brigade and several SS units.

Once complete, the division was sent to France to participate in the Battle of France. Committed to the XIX Motorized Corps, the 10th Panzer Division was committed to the southern axis of the fight, with the 1st and 2nd Panzer Divisions as well as Infantry Regiment Großdeutschland. It advanced through Luxembourg broke through the French lines at the Muese River near Sedan, all the way to the English Channel in its first engagement. At Sedan, the division remained briefly in reserve to protect the German bridgehead across the river from French counterattack. From there, the division pushed allied forces from the ports in the Flanders region, before engaged in mopping-up operations in western areas of France after the French surrender. Following this, the division engaged in occupation duty and training in France.

In March 1941, the division was recalled to Germany, and moved to the border with the Soviet Union in June of that year in preparation for Operation Barbarossa. Once the operation was launched, the division fought in engagements at Minsk, Smolensk, Vyasma, and the Battle of Moscow. It remained in the region during the Russian winter offensive of 1941-1942, holding Juchnow, near Rzhev, against repeated Russian counterattacks from January to April 1942. By 1942, the division had suffered massive casualties and losses, forcing it to be withdrawn to rebuild.

The division was sent to Amiens, France for rehabilitation. Here, it was reorganized, eliminating the brigade headquarters because the division had been so badly mauled it no longer needed them. In 1942, the division was rushed to Dieppe, where it played a minor role in countering the Dieppe Raid by Allied forces. Once the Allies landed in North Africa, the 10th Panzer Division was placed in occupation duty in Vichy France, and rushed to the African Theater in late 1942 as soon as transport became available. It landed in Tunisia and participating in the Battle of Kasserine Pass and several of the other early battles with units of the United States Army, newly committed to the war. In December 1942, the division, now a part of Fifth Panzer Army, consolidated defenses around Tunis, and the battle-weary troops were able to form a line against the advancing allied forces.

The division remained fighting during the early months of 1943. At that time, when the Axis line collapsed in May 1943, the division was trapped. It surrendered on May 12 and was never rebuilt.
Posted by Mitch Williamson at 2:39 PM