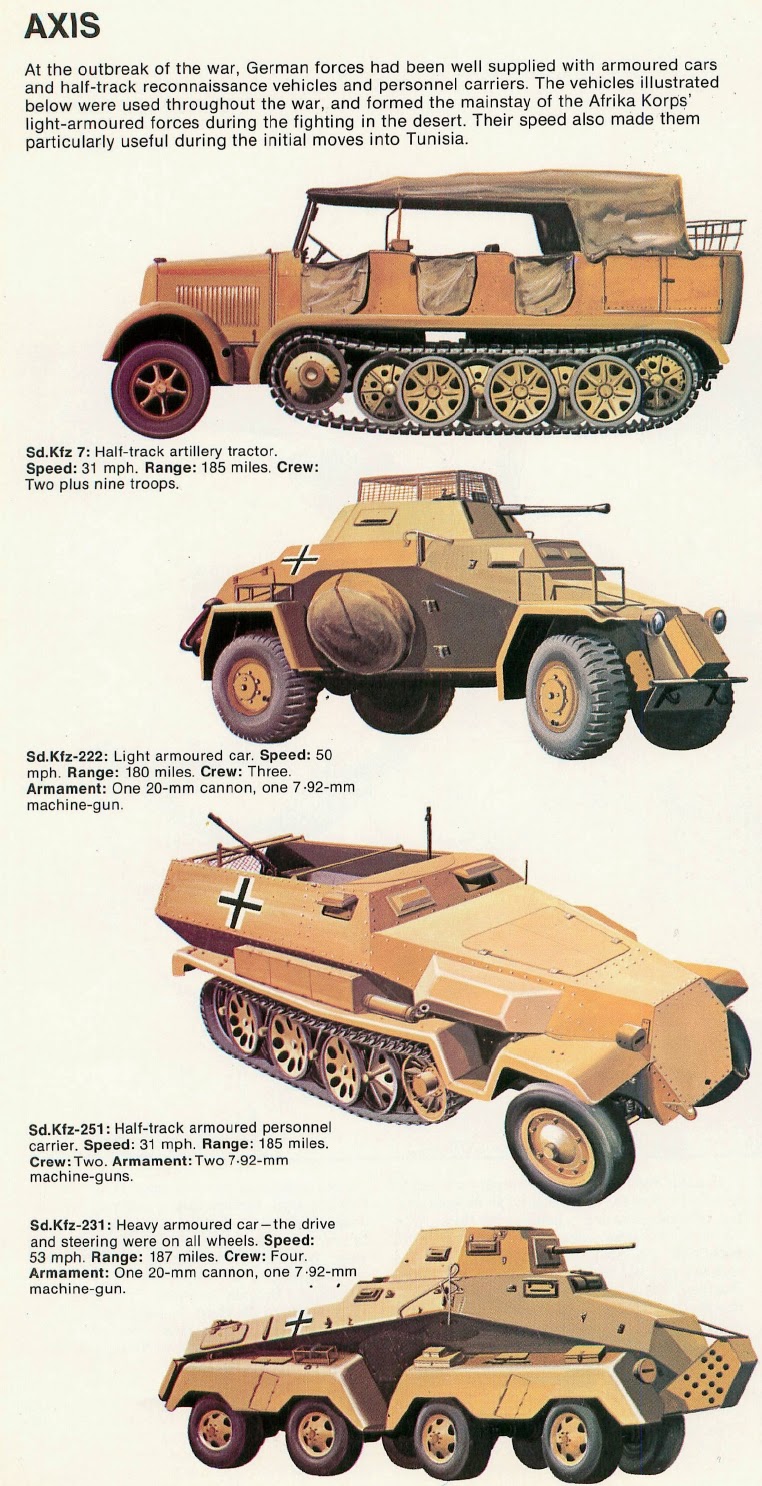 The Afrika Korps was an expeditionary combat force of the German army that fought in North Africa from February 1941 until May 1943. Adolf Hitler ordered the establishment of a German expeditionary force in North Africa in January 1941, following Italian defeats in Tobruk and Benghazi, at the request of the Italians, who had refused an early German offer for military assistance. Originally known as Befehlshaber der deutschen Truppen in Libyen (Commander of the German Troops in Libya), from 21 February 1941 the unit was called the Deutsche Afrika-Korps. Hitler formed the Korps for strategic reasons; he had planned a campaign against Greece and feared the loss of the eastern Mediterranean and a severe weakening of his Axis ally. In addition, the occupation of North Africa was a major precondition for German supremacy in the Near and Middle East as envisaged in Hitler’s long-range plans.

The Afrika Korps was led by General Erwin Rommel (1891–1944), a highly decorated World War I hero who served as military commander guarding Hitler’s headquarters from 1938 and as commander of a tank division in 1940. The Afrika Korps itself in early 1941 consisted of the Wehrmacht’s Fifteenth Tank Division and the Fifth Light Tank Division (later the Twenty-first Tank Division). Its forces were highly motorized and equipped with specific uniforms for desert warfare. The overall German-Italian military organization was gradually extended and renamed Panzergruppe Afrika in September 1941, Panzerarmee Afrika in February 1942, Deutschitalienische Panzerkräfte Afrika in October 1942, and finally Heeresgruppe Afrika in January 1943, always under the command of Rommel. The actual Afrika Korps, which was led from August 1941 by other generals, then constituted only a part of these forces. Nevertheless its name is generally used for all of them, until the German forces became part of the First Italian Army in March 1943.

German troops landed in Libya on 8 February 1941. On 31 March 1941 they bombed the Suez Canal and attacked Cyrenaica, which was conquered by mid-April. British forces were weakened by a simultaneous attack by the Wehrmacht in southeastern Europe but regained their strength during the course of 1941. As a consequence of the German attack on the Soviet Union starting in June of 1941, the Afrika Korps was not reinforced during 1941, so it was not able to defend all of the gains it had made in the spring of 1941. In November Rommel had to retreat to the earlier front line.

After German naval successes and the transfer of German Airforce Fleet 2 [Luftflotte 2] from the Soviet Union to the Mediterranean, Rommel on 21 January 1942 surprisingly again took the initiative and attacked British troops, and the Afrika Korps occupied Benghazi. But the advance was stopped because the Italian army had not been informed and did not participate in the offensive.

Supplied with information from broken U.S. diplomatic codes, Rommel was able to continue his offensive on 26 May. On 21 June 1942 his troops conquered the Tobruk area, where a decisive line for British logistics was cut. The Wehrmacht was able to capture twenty-eight thousand enemy soldiers and major supply stocks of the British army. Immediately thereafter the Afrika Korps entered northwestern Egypt as far as the village of El Alamein, almost one hundred kilometers west of Alexandria, where it was halted at the end of June by fierce British resistance. Rommel’s next attack in the battle of Alam al-Halfa at the beginning of September failed. Since Hitler did not order the occupation of Malta as the Italians had suggested, the British Eighth Army was able to obtain excellent supplies, including new U.S. tanks, through the Royal Navy.

Rommel’s new British counterpart General Bernard Law Montgomery, who could rely on airpower supremacy and excellent intelligence information, launched a counterattack on 23 October 1942 and overran the German positions on 2 November in a major tank battle at El Alamein. Thirty thousand Axis soldiers were captured. Meanwhile on 7–8 November in Operation Torch, the Allies landed to the rear of German troops in Morocco and Algeria. This took the German and Italian military totally by surprise. The German troops were quickly reinforced by 150,000 men but had to retreat from Libya, which was lost to the Germans at the end of January 1943, and into Tunisia. Rommel on 9 March was replaced by Colonel General Hans-Jūrgen von Arnim. Since Hitler forbade any evacuation of troops, the Heeresgruppe Afrika surrendered with 275,000 men, among them the soldiers of the Afrika Korps, on 11 May 1943.

Hitler considered the North African theater of war a sideshow until November 1942, despite its strategic value, especially for Britain and the Royal Navy. Nevertheless considerable German forces were drawn from the European continent, especially after October 1942. German defeats occurred simultaneously in Stalingrad and North Africa.

The Afrika Korps has gained a major place in German and British memories of the war, especially due to the fact that in North Africa modern armies fought in a rather unusual environment. Already during the war Rommel was considered a brilliant operational performer, called the Desert Fox by his soldiers, among whom he was very popular; he was also admired to a certain extent by the British. His successes predominantly relied on his capability to surprise the enemy and on excellent logistical support. In June 1942 he was promoted to field marshal, the highest rank in the German army. The Afrika Korps was less implicated in German war crimes than units in other areas, although it took some responsibility for the internment and forced labor of Tunisian Jews. Rommel’s suicide on 14 October 1944, after the failure of the 20 July 1944 plot against Hitler, further bolstered his image as a military professional with a clean record.

BIBLIOGRAPHY Baxter, Colin F. The War in North Africa: 1940–1943: A Selected Bibliography. Westport, Conn., 1996. Boog, Horst, et al. The Global War: Widening of the Conflict into a World War and the Shift of the Initiative, 1941–1943. Translated by Ewald Osers. Vol. 6 of Germany and the Second World War. Oxford, U.K., 2001. Mitcham, Samuel W. Rommel’s Desert War: The Life and Death of the Afrika Korps. New York, 1982. Porch, Douglas. The Path to Victory: The Mediterranean Theater in World War II. New York, 2004. Schreiber, Gerhard, Bernd Stegemann, and Detlef Vogel. The Mediterranean, South-east Europe, and North Africa, 1939–1941: From Italy’s Declaration of Nonbelligerence to the Entry of the United States into the War. Translated by Dean S. McMurry, Ewald Osers, and Louise Willmot. Vol. 3 of Germany and the Second World War. Oxford, U.K., 1995.
Posted by Mitch Williamson at 5:12 PM