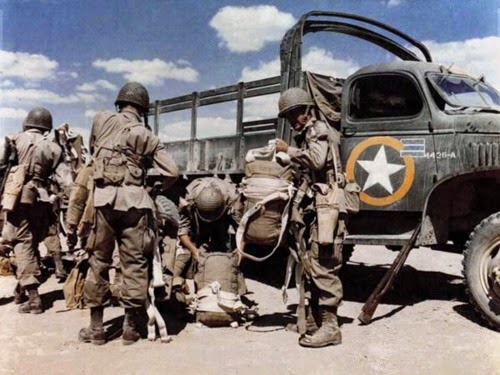 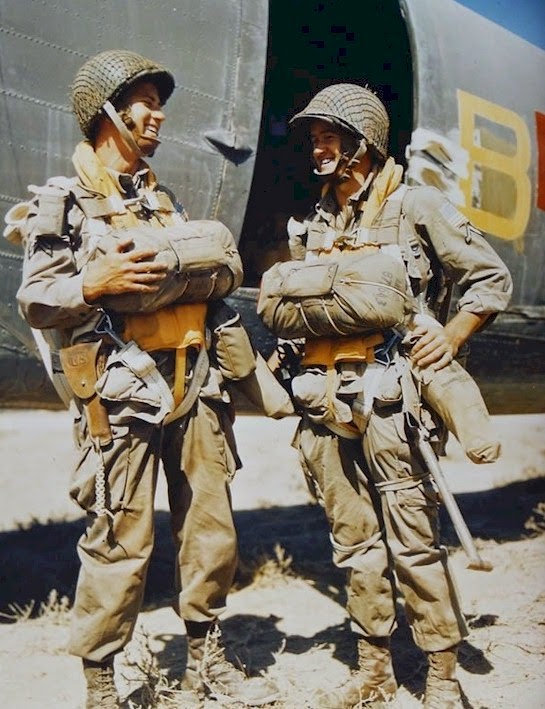 After eight months of intensive training at Bragg the 82nd was anxious to get on with the war. The troopers were at a high state of readiness and the war situation was beginning to turn in Africa at least. American paras in the shape of the 509th had been in action during Operation Torch, but the first full-scale use of the Airborne was yet to be undertaken.

In April 1943 orders finally came for deployment overseas to a yet unspecified destination. On the 20th the division began moving by train to Camp Edwards, Massachusetts. This was completed in an air of secrecy, which required the troopers to remove all Airborne insignia and their beloved jump-boots, that they might pass for 'legs' during the transit. Eventually boarding troopships at New York on the 27th the division sailed for North Africa on the 29th.

Conditions on the troopships were less than luxurious but the troopers did their best to cope and keep fit on the long voyage east. Finally, on 10 May the convoy docked at Casablanca. Whilst the ships were unloaded a few days were spent at Camp Don B Passage, before moving out north-eastwards to bivouac camps at Oujda (for the paratroops) and Marnia (for the glider forces).

Here they were joined by the men of the 509th who, with three combat jumps to their credit, naturally felt somewhat superior to the 'green' 82nd. The veterans soon found the newly arrived troopers keen to learn from their experience, however, and the next few weeks of intensive training proceeded apace.

In view of the intense daytime heat, which limited the performance of both men and machines, much of this training was carried out at night. The experience proved invaluable, with the men learning how to group and carry out assaults under a variety of circumstances. The gliders, too, were rehearsed, with much time being devoted to the speedy removal and bringing into action of the heavy equipment they carried.

There was little scope for diversion during this period, although the division attracted its fair share of high-ranking visitors, anxious to see how the new force was shaping up. Visiting 'brass' included their erstwhile commander Omar Bradley, and George Patton who immediately recognised kindred spirits in the tough troopers.

With little outlet for off-duty enthusiasm the troopers turned their energies to occasionally bizarre enterprises. It was for instance considered by some that they needed an animal mascot to replace Max the dog, left behind in the States. This took the form of an unfortunate beast-variously reported as a mule or a jackass-which they tried to train to jump with them. Getting it into a parachute and out of the aircraft was apparently accomplished without problems. Sadly it failed to appreciate the finer points of landing, breaking a leg on its first jump, its consequent demise seemingly a poor reward for considerable equine bravery.

On 24 May Colonel Gavin, one of the regimental commanders, was called to Ridgway's HQ to be briefed on the forthcoming assault on Sicily, Operation Husky, slated for 9 July. Characteristically, Gavin shortly arranged to recce the drop zones (DZs) in person. Gavin, two battalion commanders and two pilots from the 52nd Troop Carrier Wing, took a pair of the unarmed, but very fast British Mosquito aircraft over Sicily. This risky undertaking was fortunately accomplished without loss, and Gavin returned confident that the operation was feasible.

As an aside, the loss, or worse the capture, of such a senior officer would have seriously compromised the operation. Much effort had been expended on disinformation (including the 'Man Who Never Was' operation which allowed the Germans to 'find' a body carrying 'secret' documents indicating an invasion somewhere else). This need to keep the target secret had unfortunate consequences. The troopers were not informed of the presence on Sicily of a Panzer division, lest the fact that they knew that gave away the objective. They were thus insufficiently prepared for the Tiger tanks of the Hermann Goring Division they encountered. On 16 June, after six weeks of intensive training, the division moved to Kairouan in Tunisia. The invasion of Europe was about to begin.
Posted by Mitch Williamson at 2:18 PM