Bikes in the Desert 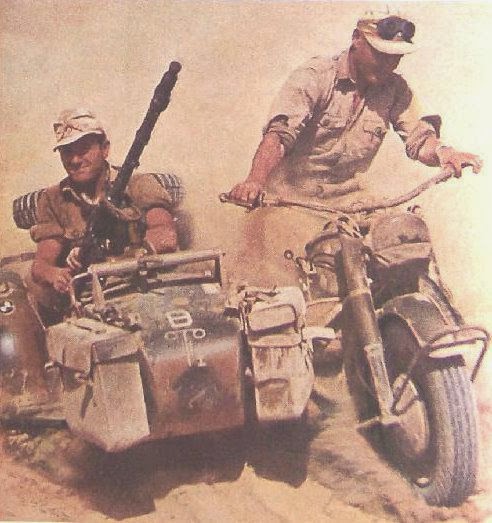 German forces were also famous for their use of bike sidecar combinations. In 1935 BMW began work on their R12 model. Intended as a touring design for the civilian market it featured for the first time on any bike telescopic front forks with hydraulic damping. The German motorcycle industry had long been prepared for the outbreak of worldwide conflict lead by innovation created in the world of motor sport. BMW, DKW and NSU competed in the 500cc racing class in the late 1930s, and in the smaller 250cc DKW dominated. Underlying these sporting successes was the propaganda pushing the image of Germany as world leader. On the home front in Germany large numbers of smaller motorcycles were being produced and made available to the public and thus in return the nation was gaining a populace experienced at both riding and maintaining these machines. In 1938 further preparations were stepped up with the rationalisation of manufacturing industries. The multiple motorcycle types and variants on offer numbered somewhere in the region of 150 and these were reduced to just 30 types; the array of engines on offer were standardised so that just a few were offered to power these thirty models. Many manufacturers had the type of motorcycle they would produce enforced upon them, but parts production saw the greatest reduction in surplus labour effort and over-complication. Items such as saddles, number plate stamping plants, and electric horns were reduced to a single design type of which chosen companies were allowed to produce. The process was successful, simplifying the stores management, the re-supply of parts quickly, and allowing saved funding to be redirected into the war effort elsewhere.

Like all the participants of the Second World War, the German army's views towards two-wheeled warfare also covered several trends. Commencing the war with a vast majority of solo machines, from two-stroke to robust flat twins paired with sidecars a change of preference occurred after 1940. A move then leant toward the complex and expensive BMW and Zundapp combinations in the midwar period but with industry pressed by the Allied bombing campaigns production of these machines was phased out through 1944 and Germany returned to production of I25cc and 350cc machines in the last year of the war, DKW being the sole German manufacturer to continue motorcycle production between 1939-1945.
Posted by Mitch Williamson at 5:54 PM

Email ThisBlogThis!Share to TwitterShare to FacebookShare to Pinterest
Labels: Weapon