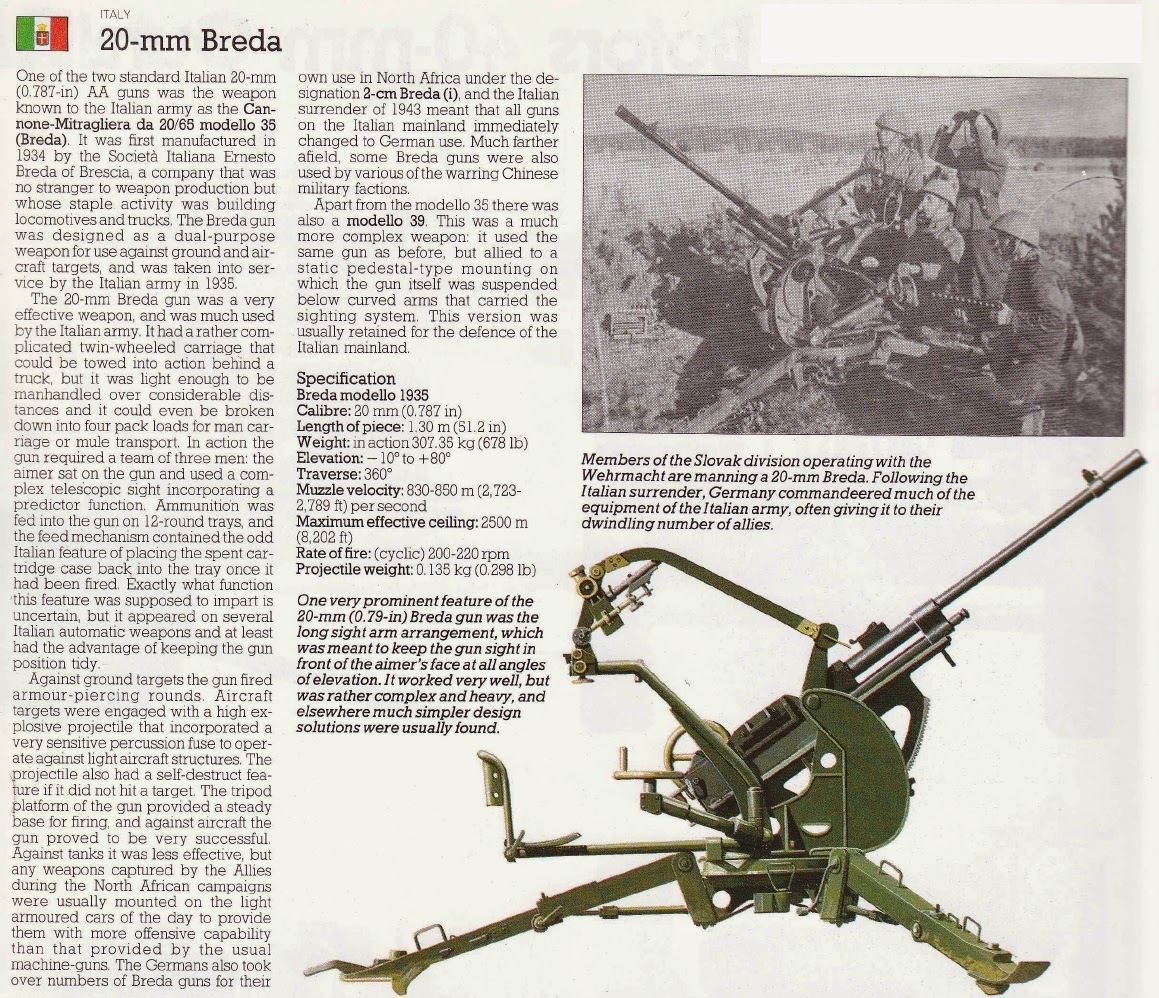 This gun was of the two standard Italian 20mm anti-aircraft guns and was the Cannone-Mitragliera da 20/65 modello 35 (Breda) which was first manufactured in 1934. It was designed as a dual purpose weapon for use against ground and air targets and was taken into service by the Italian army in 1935. The 20mm Breda was a very effective weapon and was much used by the Italian Army. It had a rather complicated twin-wheeled carriage that could be towed into action behind a truck but that was light enough to be broken down into four pack loads for man or mule carriage.

British manned 20mm Breda in action in Tobruk In action the gun required a three-man crew. The aimer sat on the gun and used a complex telescopic sight incorporating a predictor function. Ammunition was fed into the gun on 12-round trays and the feed mechanism contained the feature of placing the spent cartridges back into the tray once it was fired. This feature appeared on many Italian automatic weapons and had the advantage of keeping the gun position tidy.

Against ground targets the gun fired armour-piercing rounds, while aircraft targets were engaged with a high explosive projectile that incorporated a very sensitive percussion fuse to operate against light aircraft structures. The latter projectile also had a self-destruct feature if it did not hit a target. The tripod platform of the gun provided a steady base for firing and against aircraft the gun proved very successful. Against tanks it was less effective, but any weapons captured by the Allies during the North African campaigns were usually mounted on the light armoured cars to provide them with more offensive capability than a machine gun provided and Portee to provide mobile air defence for armoured columns. The Long Range Desert Group also mounted them on the rear of some it is vehicles nicknaming them 'Scorpions' as they then had a sting in their tail.

The Germans also took over numbers of Breda guns for their own use in North Africa under the designation 2-cm Breda (i) and they also even used them when a number of Panzer MKII's were refitted as reconnaissance vehicles. When used for the latter it fired from a loose belt or hundred round belts stored in canister. Breda guns were also given to the German allies after Italy’s surrender, such as Slovakia, and was used in China as well. There was also a modello 39 that was a more complex weapon on a static pedestal type mounting on which the gun itself was suspended below curved arms that carried the sighting system. This version was usually retained for homeland defence of Italy.

Posted by Mitch Williamson at 11:27 AM