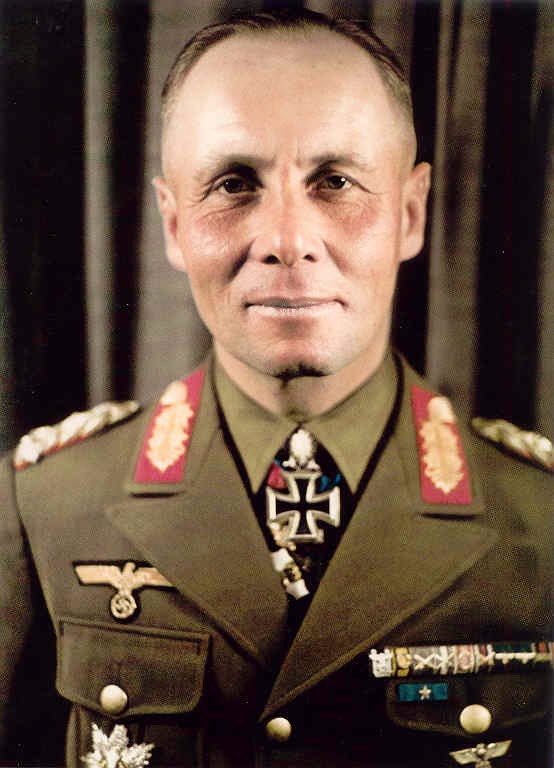 Of all the theaters of operations, it was probably in North Africa that the war took on its most advanced form. The protagonists on both sides were fully motorized formations, for whose employment the flat and obstruction-free desert offered hitherto undreamed-of possibilities. It was the only theatre where the principles of motorized and tank warfare, as they had been taught theoretically before the war, could be applied to the full-and further developed. It was the only theater where the pure tank battle between major formations was fought. Even though the struggle may have occasionally hardened into static warfare, it remained-at any rate in its most important stages (i.e in 1941-42 during the Cunningham-Ritchie offensive, and in the summer of 1942-Marmarica battles, capture of Tobruk)-based on the principles of complete mobility.

In military practice , this was entirely new, for our offensives in Poland and the West had been against opponents who, in all their operations, had still had to take account of their non-motorized infantry divisions and had thus had to suffer the disastrous limitation in their freedom of tactical decision which thus imposes, especially in the retreat. Often they had been forced into actions quite unsuited for the object of holding up our advance. After our break-through in France, the enemy infantry divisions had simply been overrun and outflanked by the out motorized forces. Once this had happened they had had no choice but to allow their operational reserves to be worn away by our assault groups, often in tactically unfavorable positions, in an endeavour to gain time for the retreat of their infantry.

Non-motorized infantry divisions are only of value against a motorized and armoured enemy when occupying prepared positions. If these positions are pierced or outflanked, a withdrawal will leave them helpless victims of the motorized enemy, with nothing else to do but hold on in their positions to the last round. They cause terrible difficulties in a general retreat-for, as I have indicated, one has to commit one's motorized formations merely to gain time for them. I was forced to go through this myself during the Axis retreat form Cyrenaica in the winter of 1941-42, when the whole of the Italian Infantry and a considerable part of the German, including the majority of what was to become 90th light Division, were without vehicles and had either to be carried by a shuttle service of lorries, or to march. It was only the gallantry of my armour that enabled the retreat of the Italo-German infantry to be covered, for our fully motorized enemy was in hot pursuit. Similarly, Graziani's failure can be attributed mainly to the fact that the greater part of the Italian Army was delivered up helpless and non-motorized in the open desert to the weaker but fully motorized British formations, while the Italian motorized forces, although too weak to oppose the British successfully, were nevertheless compelled to accept battle and allow themselves to be destroyed in defence of the infantry.

The British forces-in contrast to ours-were all fully mobile, and the war in Africa was, in fact, waged almost exclusively by mobile forces. Out of this pure motorized warfare, certain principles were established, principles fundamentally different from those applying in other theatres. These principles will become the standard for the future, in which the fully-motorized formation will be dominant.
The envelopment of all fully-motorized enemy in the flat and good-driving terrain of the desert has the following results:

(a) For a fully-motorized formation, encirclement is the worst tactical situation imaginable, since hostile fire can be brought to bear on it from all sides; even envelopment on only three sides is a tactically untenable situation.
(b) The enemy becomes forced because of the bad tactical situation in which the encirclement has placed him, to evacuate the area he is holding.
The encirclement of the enemy and his subsequent destruction in the pocket can seldom be the direct aim of an operation; more often it is only indirect, for any fully-motorized force whose organisational structure remains intact will normally and in suitable country be able to break out at will through an improvised defensive ring. Thanks to his motorization, the commander of the encircled force is in position to concentrate his weight unexpectedly against any likely point in the ring and burst through it. This fact was repeatedly demonstrated in the desert.
It follows therefore that an encircled enemy force can only be destroyed
(a) when it is non-motorized or has been rendered immobile by lack of petrol, or when it includes non-mobile elements which have to be considered;
(b) when it is badly led or its command has decided to sacrifice one formation in order to save another;
(c) when its fighting strength has already been broken, and disintegration and disorganization have set it.
Except for cases (a) and (b), which occurred frequently in other theatres of war, encirclement of the enemy and his subsequent destruction in the pocket can only be attempted if he has been so heavily battered in open battle that the organic cohesion of his force has been destroyed. I shall term all actions which have as their aim the wearing down of the enemy's power of resistance "battle of attrition." In motorized warfare, material attrition and the destruction of the organic cohesion of the opposing army must be the immediate aim of all planning.
Tactically, the battle of attrition is fought with the highest possible degree of mobility. The following points require particular attention:
(a) The main endeavor should be to concentrate one's own forces in space and time, while at the same time seeking to split the enemy forces spatially and to destroy them at different times.
(b) Supply lines are particularly sensitive, since all petro and ammunition, indispensable requirements for the battle, must pass along them. Hence, everything possible must be done to protect one’s own supply lines and to upset, or better still, cut the enemy's. Operations in the enemy's supply area will lead immediately to his breaking off the battle elsewhere, since, as I have indicated, supplies are the fundamental premise of the battle and must be given priority of protection.
(c) The armour is the core of the motorized army. Everything turns on it, and other formations are mere auxiliaries. The war of attrition against the enemy armour must be therefore be waged as far as possible by the tank destruction units. One's own armour should only be used to deal the final blow.
(d) Reconnaissance reports must reach the commander in the shortest possible time' he must take his decisions immediately and put them into effect as fast as he can. Speed of reaction decides the battle. Commanders of motorized forces must therefore operate as near as possible to their troops, and must have the closest possible signal communication with him.
(e) Speed of movement and the organizational cohesion of one's own forces are decisive factors and require particular attention. Any sign of dislocation must be dealt with as quickly as possible by reorganization.
(f) Concealment of intentions is of the upmost importance in order to provide surprise for one's own operations and thus make it possible to exploit the time taken by the enemy command to react. Deception measures of all kinds should be encouraged, if only to make the enemy commander uncertain and cause him to hesitate and hold back.
(g) Once the enemy has been thoroughly beaten up, success can be exploited by attempting to overrun and destroy major parts of his disorganized formations. Here again, speed is everything. The enemy must never be allowed time to reorganize. Lightning regrouping for the pursuit and reorganization of supplies for the pursuing forces are essential.
Concerning the technical and organizational aspect of desert warfare, particular regard must be paid to the following points:
(a) The prime requirements in the tank are maneuverability, speed and a long-range gun-for the side with the bigger gun has the longer arm and can be the first to engage the enemy. Weight of armour cannot make up for the lack of gun-power, as it can only be provided at the expense of maneuverability and speed, both of which are indispensable tactical requirements.
(b) The artillery must have great range and must, above all, be capable of great mobility and of carrying with it ammunition in large quantities.
(c) The infantry serves only to occupy and hold positions designed either to prevent the enemy from particular operations, or to force him into other ones. Once this object has been achieved, the infantry must be able to get away quickly for employment elsewhere. It must therefore be mobile and be equipped to enable it rapidly to take up defence positions in the open at tactically important points on the battlefield.

It is my experience that bold decisions give the best promise of success. But one must differentiate between strategic or tactical boldness and a gamble. A bold operation is one in which success is not a certainty but which in case of failure leaves one with sufficient forces in hand to cope with whatever situation may arise. A gamble, on the other hand, is an operation which can lean to either victory or to the complete destruction of one's forces. Situations can arise where even a gamble may be justified-as, for instance, when in the normal course of events defeat or just merely a matter of time, when the gaining of time is therefore pointless and the only chance lies in an operation of great risk.
The only occasion when a commander can calculate the course of a battle in advance is when his forces are so superior that victory is a forgone conclusion; then the problem is no longer one of "the mean" but only of "the method". But even in this situation, I still think it is better to operate on the grand scale rather than creep about the battlefield anxiously taking all possible security measures against every conceivable enemy move.

Normally, there is no ideal solution to military problems; every course has its advantages and disadvantages. One must select that which seems best from the most varied aspects and then pursue it resolutely and accept the consequences. Any compromise is bad.
Posted by Mitch Williamson at 8:54 PM