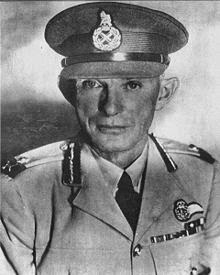 By the end of June 1942 the Eighth Army, with Axis forces not far behind, had regrouped along the ‘‘Alamein Line,’’ a chain of prepared defensive positions called boxes extending from the coast south to the Qattara Depression. What became known as the First Battle of Alamein would constitute the Allies’ last attempt to halt the Germans and Italians before they reached Cairo. With the First Division assigned the most northern section of the line, Pienaar positioned his Third Infantry Brigade with considerable artillery support inside the ‘‘Alamein Box’’ and pulled the First and Second brigades back to the southeast from where they would be employed as quick reaction forces. Early in the morning of July 1, the German 90th Light Infantry Division advanced along the coast and was brought to a halt by South African defenses and intense artillery fire. A concentration of German armor attempted to break through just south of the 90th Division but was caught in a crossfire between all three South African brigades and pulled back. All along the front the Axis advance ground to a halt and on July 4 Rommel ordered his men to dig in. Attacks, counterattacks, and raids continued until mid-July. The First Division suffered 1,997 casualties in June and 527 in July. It was around this time that the division received six pounder antitank guns giving them better anti-armor capability.

On the night of October 23–24, South Africa soldiers participated in Operation Lightfoot, a massive infantry assault, supported by artillery and followed by engineers who would clear paths through minefields for tanks. This was the beginning of the Second Battle of Alamein. The Second and Third South African brigades would advance southwest along the Qattara Road with the intention of overcoming enemy strong points and seizing a 5-kilometer long section of Miteiriya Ridge. The First Brigade was positioned to the southeast to provide supporting mortar fire on the ridge and to open gaps in the enemy minefields as required. Held up by enemy artillery and machine-gun fire, the Second Brigade, consisting of the Cape Town Highlanders, Natal Mounted Rifles, and Field Force Battalion, took heavy casualties but eventually seized Axis defensive positions and reached its objective. Of the brigade’s 334 casualties that night, the Field Force Battalion suffered the worst with 41 dead and 148 wounded. Corporal Lucas Majozi, an NMC stretcher bearer who had sustained several wounds, refused medical treatment and continued to expose himself to machine-gun fire to carry injured men to safety. Receiving the Distinguished Conduct Medal he became the most highly decorated black South African soldier of the Second World War. During the attack the Third Brigade—the Rand Light Infantry, Royal Durban Light Infantry, and Imperial Light Horse—advanced more easily taking light casualties. A South African armoured car regiment was attached to the British First Armoured Division that advanced west through a corridor toward Kidney Ridge, was held up by an enemy strong point, and pushed through the next day. During October 24 and 25, the South African infantry dug in on Miteiriya Ridge and tanks, guns and transport moved up the Qattara Road. On the night of October 26–27 two companies, one from the Cape Town Highlanders and one from 2 Regiment Botha, seized an enemy strong point called the ‘‘Beehive’’ and at the same time First Brigade advanced 1,000 yards beyond the division’s original objective. In order to create a reserve for future offensive operations, the New Zealanders were pulled back from the line, and by October 28, the South Africa Division had moved right to replace them. Within the division’s new area, the First Brigade took the right, the Third Brigade took the left, and the Second remained in reserve. On the night of October 30–31, Axis positions in front of the South African Division were bombarded by South African artillery to divert attention from a northward thrust by the Australians closer to the coast.

During the first few days of November two South African armored car regiments participated in Operation Supercharge, the Allied offensive that broke through enemy lines sending Axis forces in a final westward retreat. Racing forward, South African armored cars operated behind enemy lines destroying transport and supplies. By November 8, the Four/Six Regiment had accounted for 5,000 enemy prisoners, 150 guns, and 350 vehicles, and on November 12, it was the first Allied unit to enter Tobruk, abandoned by the Axis, liberating a large number of NMC prisoners. As British and New Zealand infantry advanced as part of Supercharge, units of the South African Division took their place in the defensive line from where they mounted fighting patrols and were harassed by Axis shelling. In mid-November, after the general Axis withdrawal from Alamein, the First South African Division was pulled back to Quassasin. In December 1942 and January 1943 the division was transported to South Africa for conversion as an armored formation. On December 19 the plane carrying Major General Pienaar, who historian Neil Orpen has described as one of South Africa’s ‘‘most colourful and ablest military commanders,’’ and some of his staff back to South Africa crashed in Lake Victoria with no survivors. After the seizure of Tobruk, the Four/Six South African Armoured Car Regiment continued to lead the Allied advance as part of a British light armor brigade all the way to Benghazi that was taken on November 20, 1942. The Four/Six Armoured Car Regiment was then sent back to South Africa where it was disbanded, as was its parent formation the South African Tank Corps, in order to create the new armored division. It is also important to note that South African engineers, who took part in the Eighth Army’s pursuit of Axis forces after Alamein, breached minefields; repaired roads, railway, and harbor facilities; and secured water supplies. On May 12, 1943, South African warplanes dropped the last bombs of the North African campaign in which South Africa had lost 2,104 men killed, 3,928 wounded, and 14,247 captured.