Guderian’s thoughts on strategic options after The Fall of France 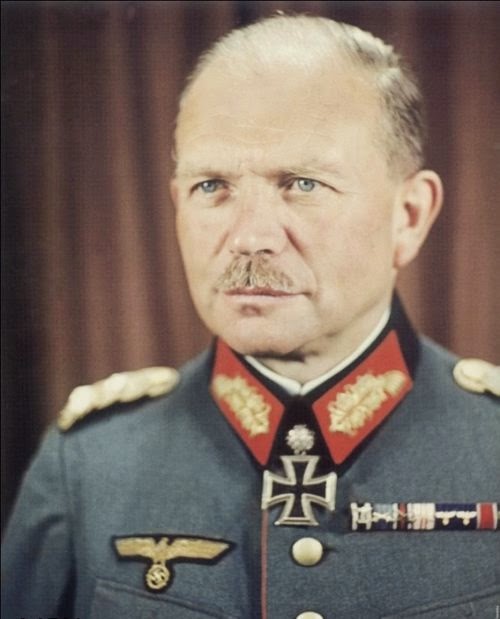 An armistice was signed at Réthondes on 22nd June. Hitler and Germany basked in fame. So, too, did Guderian, for he suddenly found himself renowned throughout the land, a hero whom the propagandists praised for his contribution to the victory. Group Guderian was credited with 250,000 prisoners in 13 days' activity. Josef Goebbels and his agents uplifted Guderian and had him broadcast to the nation. He told Gretel, 'How lovely that you heard my speech. I really enjoyed making it'. There was an enormous fan-mail and gigantic correspondence. 'The other day a former Gefreiter [lance corporal] from the First World War sent me a harmonica from his factory. It's fantastic how kind some people are'. As soon as the war was over he told his propaganda officer, Paul Dierichs, to find films of the campaign and show them to the troops. Later this material would be made into a documentary extolling Guderian's command and the Panzerwaffe: never once did he forget to publicise his organisation (and thus, be it said, himself) as counter to those who still resented the triumph. But as Dierichs points out, Though he realised the meaning of his success, it did not go to his head'.

There were more serious matters to contemplate, among them a genuine hope that the fighting was over in the belief that Britain would give up. That hope would soon die: the British fought on, but in any case neither Guderian nor anybody else on the German side were aware that Hitler was formulating schemes which outlawed peace.

Yet Guderian himself displayed the same conquering restlessness as his Führer when, on 27th June, he shared his views with General Ritter von Epp, who called in during a visit to the front. He explained to Gretel that they discussed 'Colonial questions'. They did indeed, for Epp was an expert on the subject: but the discussion also ranged over the course to take if Britain went on fighting, and the manner of carrying the battle to the remaining enemy. It is reflected on pages 136 and 137 of Panzer Leader and is worth study as an indication of Guderian's contemporary attitude, as well as a demonstration of his accurate reading of the strategic situation and the shifting balance of power—at a time when the vanquished French were turning in anger upon the British and the Italians had already entered the war on Germany's side. He claimed, after the war, that 'in view of the insufficiency of our preparations in the air and on the sea, which were far below what would be needed to invade [England], other means would have to be found of so damaging our enemy that he would accept a negotiated peace'.

He went on: 'It seemed to me, then, that we could ensure peace in the near future by, first of all, advancing at once to the mouth of the Rhône: then, having captured the French Mediterranean bases in conjunction with the Italians, by landing in Africa, while the Luftwaffe's first-class parachute troops seized Malta. Should the French be willing to participate in these operations, so much the better. Should they refuse, then the war must be carried on by the Italians and ourselves on our own, and carried on at once. The weakness of the British in Egypt at that time was known to us. The Italians still had strong forces in Abyssinia. The defences of Malta against air attack were inadequate. Everything seemed to me to be in favour of further operations along those lines, and I could see no disadvantages. The presence of four to six panzer divisions in North Africa would have given us such overwhelming superiority that any British reinforcements would inevitably have arrived too late.'

Epp, of course, was a dyed-in-the-wool Nazi, one of the original Freikorps' fighters who had won a reputation as the ruthless exterminator of German Communists and who had helped finance the Nazi Party at the outset. As a member of the Reichstag and Chief of the Nazi Party's Department for Colonial Policy, Epp had the Führer's ear, even though he was among those who doubted the wisdom of Germany's involvement in a major war. Guderian claims that Epp put his scheme to Hitler but that Hitler was not interested in exploring the possibilities further. This is not strictly correct. Hitler, inspired not a little by Jodl, explored a multitude of projects after the fall of France, among them collaboration with the Italians in an invasion of Egypt that was firmly rebuffed by Mussolini who wanted to snatch a little glory for himself in his own sphere of influence. He also made overtures to Spain in connection with a drive to Gibraltar and, through the Armistice Commission, to spread his political influence into French North Africa. Admiral Raeder, too, put a strong naval case, linked with the U-boat offensive, for seizing strategic points in Africa, including the West Coast. There are few now (and maybe fewer then who were in the know) who would dispute the soundness of that maritime strategy or its veritable certainty of success.

Hitler, however, was a land-animal who recognised the allurements of the sea but left maritime adventures to sailors, preferring to send his Army inland, exclusively in its natural environment engaged upon operations which Hitler felt he understood best. Unknown to anybody else, Hitler had never forgotten the project he always had in mind and fixed his predatory gaze upon Soviet Russia.

By 22nd July both Brauchitsch and Halder were aware of their Supreme Commander's intentions and had formulated an outline plan of campaign. There would be nothing to spare for other projects, worthy though they might seem. Instead the spectre of the two-front war, which Guderian and every sane German feared above all, was being resurrected.

Posted by Mitch Williamson at 9:20 PM