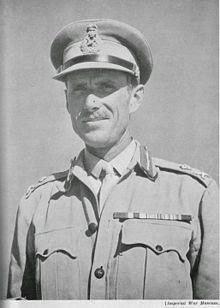 British commander in France and North Africa Born in 1894, Lumsden did not join the British army until the outbreak of World War II in 1939. A colonel leading an armored car regiment, Lumsden was part of the British Expeditionary Force sent to fight the Battle of France. He distinguished himself during the Dunkirk evacuation.

In January 1942 Lumsden led the 1st British Armored Division in the North African Campaigns, but was severely wounded early in the fighting. He returned to duty in May 1942 and, after Neil Richie, his commanding officer, was defeated at the Battle of Gazala (near Tobruk, Libya) in June, the new Eighth Army commander, Bernard Law Montgomery, promoted him to command of the new X Corps. Although Lumsden incurred heavy losses in the battle at Kidney Hill during October 27–November 4 (see El Alamein, Battles of), he achieved his objective, breaking through the Afrika Korps lines and taking El Agheila.

Lumsden and Montgomery were both strongly individualistic commanders, who, following El Alamein, fell to disputing over the conduct of the Desert War. At length, on December 13, 1942, Montgomery relieved Lumsden and replaced him with Brian Horrocks.

A tough fighter, Lumsden earned the admiration of Prime Minister Winston Churchill, who sent him in 1944 to serve on the staff of Douglas MacArthur in the Pacific theater. On January 6, 1945, while aboard the USS New Mexico observing the bombardment of Lingayen Gulf, Lumsden was mortally wounded in a kamikaze attack. He was buried at sea.