A Private's Life in the Wehrmacht during World War II 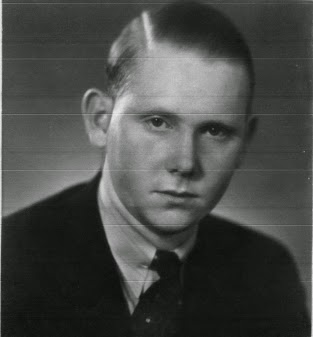 A Private's Life in the Wehrmacht during World War II

Werner Mork, pictured above at age 17, turned 18 (military age) just two months prior to the German Invasion of Poland. Although he did not see it as such at the time, he surrendered his youth to war and to the German army.
When the war broke out he rushed to enlist. He enlisted because he loved his country and felt himself to be a patriot. He enlisted because he admired and respected the country's leader, Adolf Hitler, who had settled the social unrest in his small town that had manifested itself as almost daily riots in the streets.
He enlisted because he wanted to see Germany regain its rightful place as a respected power in Europe and undo the humiliation of the Treaty of Versailles.
Most of all he enlisted because he wanted to help reunite the German populations who found themselves cut off from the Fatherland in Alsace-Lorraine, the Sudetenland, Danzig and East Prussia and put an end to the tales of their persecution that filled the newspapers daily.
His memoirs chronicle the life of a ordinary solder in the German army, but it also reflects the gradual disillusionment of the German people and their eventual awakening to an new understanding of humanity and their place in the world.

Marking time in Naples and Capri
Flight out on a BV 222 Flying Boat
Attached to Nachschub Abteilung 686
Driving the Chief of the Medical Staff
Digging fortifications in the stony desert floor
Driving the Hanomag 7.5 Ton Truck
Driving Supply Trucks in Africa - 1942- Part II

The "Chained Dogs" of the Feldgendarmarie
Traveling through the Brenner Pass
Partisans and Blackshirts Battle in Bologna
Watching the Anzio Invasion from the Balcony Seats
Malaria: Tormentor and Savior
The Battle of Monte Cassino - 1944 - Part I

Carrying Truckloads of Artillery Shells to the Front
The Young Firebrands of the Elite Korps
Morganthau Plan and Our Will to Fight
Monte Cassino Falls; Our Disorderly Retreat
Living Off the Land in Italy
We Have Lunch with the Enemy
The War on the Eastern Front - 1945

Cease Fire: We make a run for the American Lines
Capture by a Czech Lynch Mob
Tabor POW Camp
On the Road to Pilzen
Horazdovice POW Camp
Shunned by my Comrades
Starvation, Fear and Dispair
Mork, the Super-Nazi?
The Long Road Home
The Homecoming...


Werner Mork has also written extensively about his life growing up
in the Weimar Republic and the early years of the Nazi Era.

See: Growing Up in Hitler's Germany