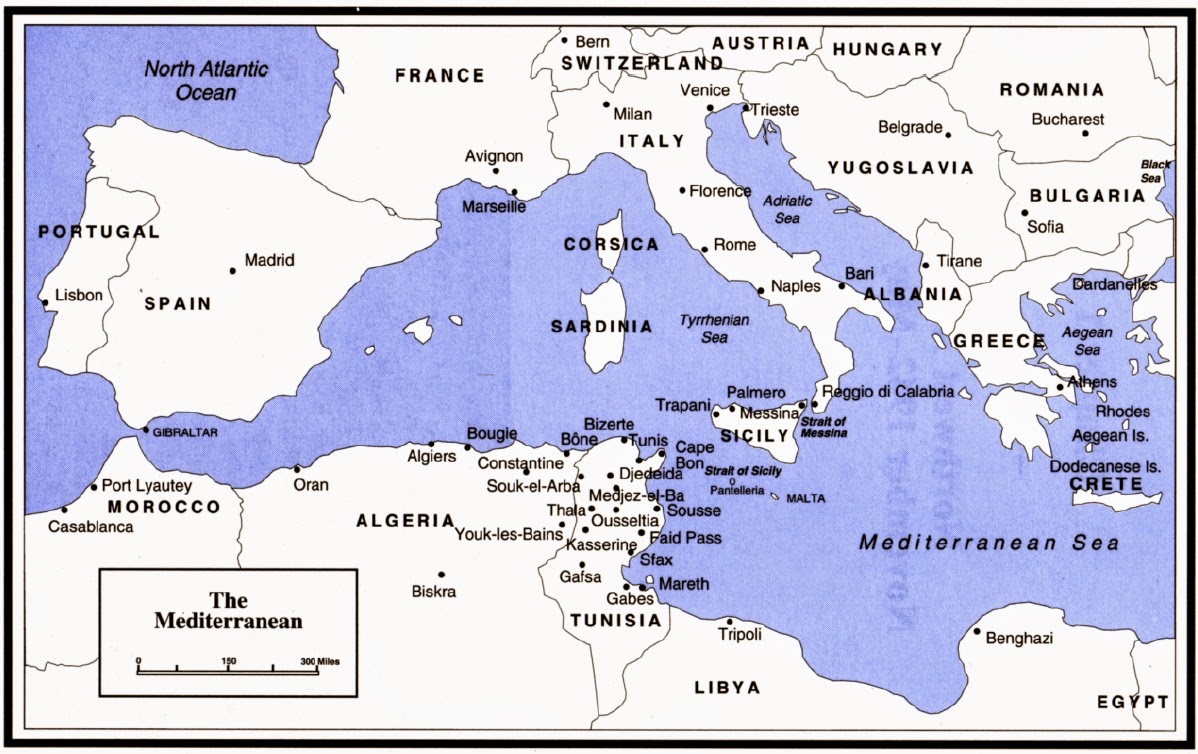 Lt. Gen. Sir Bernard Law Montgomery, since August the commander of the Eighth Army, had driven the Germans into headlong retreat at the second battle of El Alamein in October. Rommel soon after concluded that it would be impossible for the Axis to hold North Africa. German submarines had lost the Battle of the Atlantic, he argued, and the Anglo-Americans would in time muster in Africa a force too large to be resisted. He urged that his army consolidate with Nehring’s and launch an offensive to beat back the Allies long enough to permit the evacuation of the German forces from Africa for the defense of Europe.10 But Hitler was adamant that an invasion of southern Europe should be staved off as long as possible by a stand in North Africa even, as he seems eventually to have concluded, at the cost of the forces sent there.” Kesselring, ever inclined to optimism, believed that indefinite resistance would be possible in mountainous Tunisia where the Allies would have to operate at the end of a long overland line of supply. He shared Rommel’s opinion that logistics would be decisive, stating on November 24 that “in the last analysis everything depends upon supply.” But he differed from the general in his conclusion that the “air and sea situations” were “not unfavorable,” as the convoy routes from Italy to Tunisia were shorter and easier to protect than those to Libya.

Having secured Algiers, General Anderson set out for Tunis on November 11. Nearly 400 miles of mountainous terrain separated Algiers from Tunis. An advance wholly overland would therefore have been too slow, as the campaign had become a race against the German airlift from Italy. On November 11 TORCH’S reserve force landed at Bougie, 100 miles east of Algiers. The loss of three of the four transports involved in this operation to German aircraft after they had disembarked their troops confirmed the wisdom of the decision to make the initial landings farther west. Bône fell to British paratroopers on November 12. An American airborne force took Gafsa three days later, as the larger part of Anderson’s task force struggled overland by road and rail. By November 16, advance parties reached the Tunisian frontier. Only small skirmishes had so far occurred between the Anglo-Americans and small German and Italian patrols.

Anderson began his general offensive on November 24. In the face of intensifying German resistance, the Allied forces captured Djedeida on November 28. A mere twelve miles from Tunis, Djedeida marked the farthest Allied advance of the winter campaign, for Nehring recaptured it on December 1. Stymied by German resistance and rains that made roads and airfields unusable, Eisenhower halted the advance. He consolidated his forces along a line that ran from Medjez-el-Bab in the north through Ousseltia and Faid south to Gafsa.

The Allies had lost the race for Tunis. Part of the price they would pay was the presence of Rommel and his First Italian Army (the former Afrika Korps) in Tunisia. Rommel’s plan for a concentration of forces in Tunisia had not been initially well received by his superiors, who insisted that he make a stand in western Libya. This decision, however, was reversed in December. The Germans had earlier decided upon a series of local offensives to enlarge their constricted Tunisian bridgehead. For this reason, Nehring was replaced on December 9 by an experienced commander of armor withdrawn from Russia, Maj. Gen. Jurgen von Arnim. But when the reserves to support the offensive strategy were diverted to meet a developing crisis on the Russian front, reinforcement of von Arnim’s force by Rommel’s became necessary if there was to be an active defense of Tunisia. When the First Italian Army reached Tunisia it joined with the Fifth Panzerarmee to form Heeresgruppe Afrika which Rommel commanded.

When the Germans later reflected upon their defeat in Tunisia, it seemed to them that the Allies had come only “gradually” to realize that “supplies were the weak link of the Axis position in Tunisia.” This perception may seem strange, given the success with which the Royal Navy had for so long attacked convoys bound for Libya. But the progressive consolidation of the Axis’ forces in Tunisia spelled a respite for the Axis’ convoys by reducing the scope of Allied naval action. The Italians had heavily mined the Strait of Sicily. Convoys for Tunis, which staged from Sicily, were relatively safe from naval attack as long as they remained within the channels left within the minefields.

The manifold problems of the Allied air forces also delayed effective attacks on the convoy routes from Sicily. Not until February 1943 were they ready to begin antishipping operations on a large scale. The Desert Air Force of the British Eighth Army was for much of January and February beyond range of the Strait of Sicily. The Germans, moreover, had so methodically plowed and mined the airfields of western Libya that the Desert Air Force was slow to start operations even when it was within range of the convoy routes. It became fully operational in Tunisia only around March 1. The situation of the Allied air forces already in Tunisia and eastern Algeria-the American Twelfth Air Force and the Royal Air Force’s (RAF’s) Eastern Air Command-was more serious still. Throughout December and January they had to contend with a potent Luftwaffe and intractable problems with basing, training, supply, and organization. The Germans began 1943 with slightly more aircraft in Tunisia than the Allies. January 1 saw 690 German combat aircraft in Tunisia or within range of it; the Allies had 480. While the Allied air forces had larger establishments of aircraft in the theater, they were unable to bring their full strength to bear because of the poor quality of their advanced airfields and the logistical disruptions caused by their rapid advance. In early December, the Allies had only three forward fields for their fighters: Bane, Youks-les-Bains, and Souk-el-Arba. These were, respectively, 120, 150, and 70 miles from the front. The latter two were nearly unusable during the heavy rains of the North African winter. This defect was not easily remedied-the American engineers responsible for the fields had not received their heavy equipment, and the portion of Tunisia held by the Allies was hilly and afforded few alternative sites.

Bases were also a problem for the Allies’ bombers. Not until late December did the opening of airfields near Constantine, Algeria, put the Strait of Sicily within range of medium bombers. Logistical difficulties impeded the functioning of these bases once established, and only in February were operations at all efficient, although medium bombers had begun antishipping operations on a small scale in early January. B-17s had begun to attack the ports of Tunis, Bizerte, Sousse, and Gabes early in December. But distance was a limiting factor even for these long-range aircraft: They had to operate from an inadequate field near Oran, 630 miles from Tunis-farther than London was from Berlin. A move to a better field at Biskra in western Algeria in late December increased the sortie rate of the heavy bombers somewhat. But maintenance and repair remained so inadequate for all components of the Allied air forces that in his. report of December 4 Eisenhower quoted his airmen to the effect that “near or complete breakdown” would ensue within two to seven days unless operations were curtailed. The inexperience of the Twelfth Air Force exacerbated all these problems. On December 21 the Twelfth’s commander, Maj . Gen. James Doolittle, estimated that fully 75 percent of his men were untrained or only partially trained. At this time the Allies could on any day operate only about a third of the aircraft they had in Northwest Africa.

The position of the Germans with respect to bases was much more fortunate. Besides their airdromes in Sicily and Sardinia, they had at Sidi Ahmed, El Aouina, Sfax, Sousse, and Gabes well-constructed fields, which, in contrast to the muddy tracts of the Allies, were usable throughout the rainy North African winter. These bases were the chief reason for the Luftwaffe’s air superiority: It could station more fighters within range of the Tunisian battlefield than the Allies. The Axis also controlled the well-drained coastal plains, large portions of which were usable without preparation as landing fields. This was a particular advantage for close air support as long as the Luftwaffe had air superiority. Because the Germans could station dive bombers close to the front lines, their ground commanders could quickly receive support from these aircraft, which had little to fear from the distantly based fighters of the Allies. Eisenhower reported on December 4 that air support for his forces had been “insufficient to keep down the hostile strafing and dive-bombing” that had been “largely responsible for breaking up all attempted advances by ground forces.”
Posted by Mitch Williamson at 9:10 PM