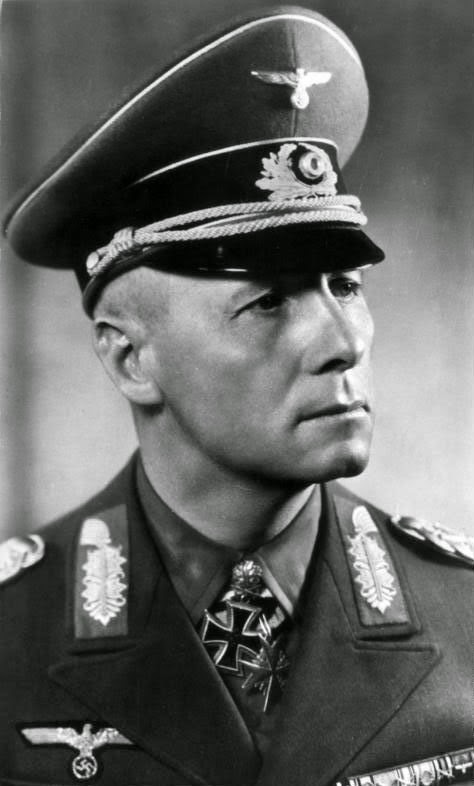 Erwin Rommel, who was appointed to command the Deutsches Afrika Korps on 12 February 1941: "In the evening the Fuhrer showed me a number of British and American illustrated papers describing General Wavell's advance through Cyrenaica.  Of particular interest was the masterly co-ordination these showed between armoured land forces, air force and navy."

Events moved quickly. A British intelligence summary dated March 1941 said: "Detachments of a German expeditionary force under an obscure general, Rommel, have landed in North Africa."
Stripped of much equipment and transport (which had been sent to Greece), tired, depleted and untested units made up much of the British army facing Rommel in North Africa.  Wavell and his staff in Cairo were not unduly worried. They comforted themselves with the belief that the Italians in Tripolitania could be disregarded and that German reinforcements would not be sufficient for any attack to be started in the near future.

The code crackers at Bletchley Park were keeping tabs on Rommel. When Churchill asked what was happening, he was supplied with German OKW, High Command of the Armed Forces, signals showing the approximate arrival dates of components of the Afrika Korps.  Although Cairo frequently complained of Bletchley Park's slowness, this time there was no delay in passing on these figures to Wavell.

By early March Wavell's director of intelligence was telling him the Afrika Korps might attack very soon.  He showed Wavell the sort of plan he thought might be on Rommel's desk.  Wavell dismissed it.

Without disputing the figures from London, his staff- guided by the way the British army did such things calculated that Rommel could not be ready before May.  His supply line was long and he would need considerable time to prepare reserves and dumps before going into action.

In Berlin the German army's C-in-C, Field Marshal von Brauchitsch, came to the same conclusion as Wavell.  He told Rommel that there could be no question of staging an offensive in Africa in the near future.  The Italian high command took the same view.  But Rommel was aggressive and ambitious.  He saw that Berlin was hoping that the Western Desert fighting might lull into a stalemate, and he had no intention of letting his command become a backwater.  He was determined to make war, and he was in a hurry.  When his ships arrived he kept the dockside lights on, and worked all night unloading despite the danger of air raids. The armoured cars that were swinging from the cranes in Tripoli in mid-February were in action ten days later.

The remarkable General O'Connor had been sent away to rest and the fighting army was now commanded by General Philip Neame, a man of outstanding valour, as his VC indicated, but lacking experience of mechanized desert fighting.  Rommel knew from intelligence and air photos that British units were short of transport, which meant uncertain supply lines all the way back to their depots in Egypt.  He saw them building de fences and that proved they had no intention of attacking him. In fact Rommel was in a situation exactly like that of General O'Connor when he had faced the Italians a short while before.

Still unconcerned, on 30 March Wavell told Neame that the enemy could not 'make any big effort for at least another month'.  At 0944 hours the next day, armoured cars of the Stahnsdorf 3rd Reconnaissance Unit having already advanced to El Agheila led the attack.  Behind them were the tanks of the 5th Panzer Regiment.  The following day Stuka dive-bombers and Rommel's 8.8-em dual-purpose guns were seen in action.

The use of these Flak guns in an artillery role was a great surprise, just as it had been at Arras, before Dunkirk, and in Spain during the civil war. The chronic failure of British military intelligence to record that the 8.8-em gun was a dual-purpose weapon is in sad accord with a signal Wavell sent to the CIGS in London estimating that Rommel's armoured division was equipped with 400 tanks, when its true strength was 168 tanks and 30 recon vehicles.
Posted by Mitch Williamson at 2:55 PM

Email ThisBlogThis!Share to TwitterShare to FacebookShare to Pinterest
Labels: Book