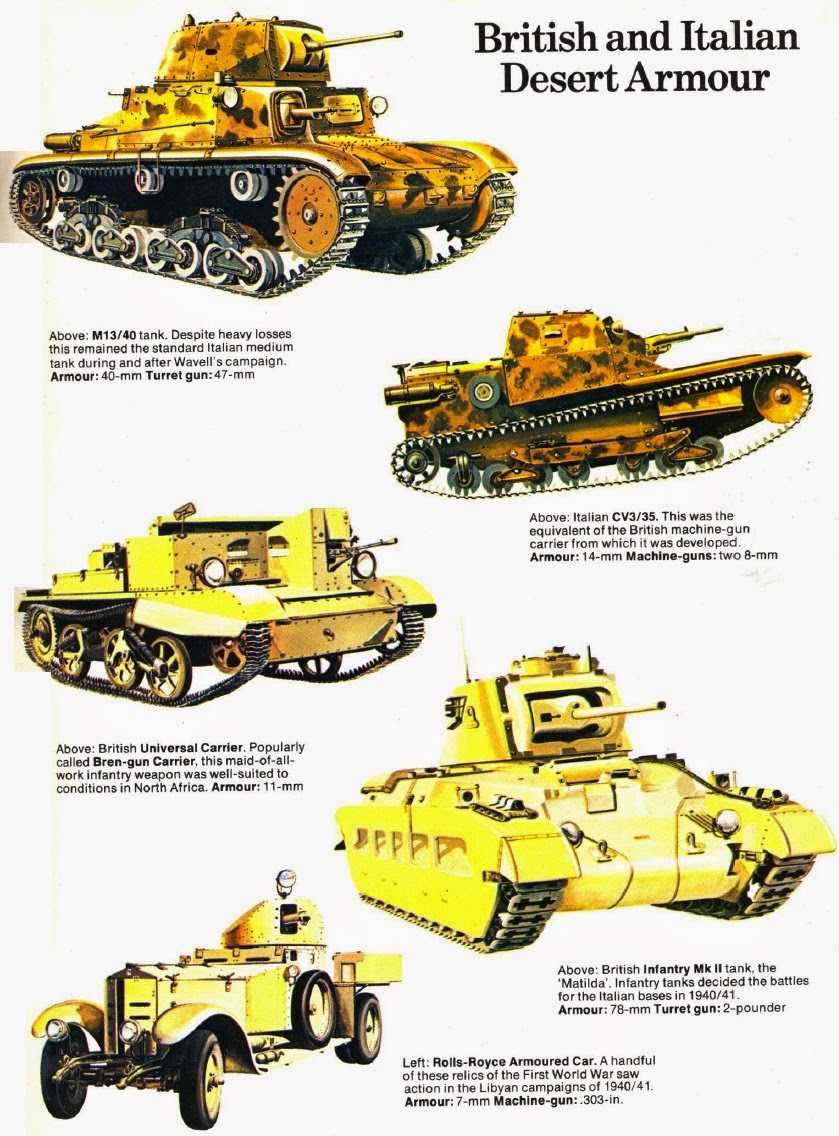 The British had too few funds available during the inter-war period for the proper development of AFVs. There always seemed to be awkward industrial reasons why no tank could be built which combined good speed with good armour. This in turn played neatly into the existing doctrinal mindset by which any given vehicle should have either one or the other quality, but not both at once. The Desert Rats did not complain, until it was too late, that they had to choose between fast but lightly armoured Cruisers and slow but heavy I-tanks. Only the American M4 Sherman (developed from the M3 Lee and Grant) would eventually exhibit a truly satisfactory balance between speed and armour, but it would become available only in late 1942, when it can be argued that it was already approaching obsolescence. (Shamefully, the ideal British-built 'capital' or 'main battle' tank, in the shape of the excellent A41 Centurion, would take the field only in the very last days of the war, when it was far too late.)

In the field of tank armament the British suffered from two major limitations. The first was that their plans to replace their 2-pdr (40mm) AT gun by a 6-pdr (57mm) were set back by a year when much of the existing inventory of 2-pdrs were lost in the Dunkirk campaign. For industrial reasons it was felt preferable to fill the gaps with large numbers of the old design, rather than with the much smaller numbers of the new one that could be made available in the same time. By 1941 the 2-pdr was far from being the best AT gun in the world, but it was, nevertheless, the best one mounted on any tank in North Africa: it had greater penetration against Axis tanks than the latter had penetration against British ones. In a purely tank-vs-tank contest the British might have cause for complaint that their armour was thinner than their enemies', but they could scarcely claim that their guns were less powerful.

The 6-pdr AT gun would not come into British service until the spring of 1942, and its successor, the mighty 17-pdr (76.2mm), only as late as March 1943; and both of these were towed guns. Tank-mounted versions would have to wait much longer; only 100 Crusader Mk III tanks mounted the 6-pdr at Second Alamein in October 1942, followed by some 6-pdr Churchill Mk Ills in Tunisia in January 1943. Almost all other British-built tanks before the end of 1942 were equipped with 2-pdrs - apart from a very few which had close support howitzers, and the very lightest types that carried nothing heavier than machine guns. The American M3 Stuarts (which the British called 'Honeys') had a 37mm gun roughly comparable to the 2-pdr; and it was only the arrival of the American M3 Grant in the spring of 1942, and that of the M4 Sherman later in the year, that would bring a heavier (75 mm) gun. This was doubly welcome because, unlike the 2-pdr (but in common with the 6-pdr), it was capable of firing HE as well as AP shells.

The second limitation was that the turret rings of all the British-designed tanks at that time had a relatively small diameter, which meant that there was little scope to build the larger turrets that would be needed to mount heavier guns. Thus, when the 6-pdr was mounted on a Crusader Mk III it took up so much space that the crew had to be reduced by one man, making for an incomplete team and consequent difficulties in 'fighting' the tank smoothly. By contrast, the German PzKw III and IV had rather bigger turret rings, so they could be upgunned more easily as better weapons successively became available. By the second half of 1942 a few of these tanks in North Africa were already being equipped with considerably better AT guns than anything available on Allied tanks, in the shape of long 5cm and 7.5cm pieces respectively. Finally, in Tunisia a handful of PzKw VI Tiger tanks took the field with a version of the 8.8cm gun that had already taken a heavy toll of Allied tanks as a towed dual-purpose (AA and AT) gun. It would be another 18 months before the Allies could fit a comparable weapon into any of their own tanks.

Italy also was involved in tank development. In 1923 Fiat came up with its 3000 light tank. Basically a copy of the World War I French light two-man M-17 Renault, it was in fact a significant improvement. Weighing some 12,100 pounds, with a crew of two, and powered by a 65-hp engine that delivered a maximum speed of 15 mph, the Fiat 3000 was lighter, faster, and more heavily armed than the Renault, although speed was achieved at high cost to crew comfort and the vehicle itself. The 3000 at first mounted two machine guns in the turret, but one of these was later replaced with a long 37mm gun, which led to worldwide interest in higher-velocity main guns with armor-piercing capability. With an improved engine and suspension, the Fiat 3000 was the backbone of Italian AFVs for most of the 1930s, and a few even survived to 1943.

The Fiat-Ansaldo was another Italian light tank of the period, introduced beginning in 1930 and based on the British Carden-Loyd tankette. Its suspension system was by double-wheel bogies sprung by torsion bars. Weighing some 10,600 pounds (it was also known as the 5-Ton) with a crew of two and a 45-hp engine that delivered a road speed of 20 mph, the prototype Fiat-Ansaldo had a 37mm gun in a fixed mount; the second model carried a turret with a machine gun and saw service in the invasion of Ethiopia. The third and final model mounted a 37mm gun in the turret and two machine guns in the hull. The Fiat-Ansaldo was the basic model for the most numerous Italian light tank of World War II, the Model L6/40.

The Italian tanks were obsolescent from the first and were never seriously up-graded. Their L3/35 was essentially equivalent to the British Bren carrier, and was armed only with machine guns. The M11 mounted its 37mm gun only in the hull, while any hit on its glacis plate was likely to start a major fire in the transmission fluid. The more modern M13 tank, with a 47mm gun, was considered just about good enough for the British to run a battalion (6th RTR) of captured examples in the spring of 1941; but they never really performed well, being notoriously underpowered and unreliable. Their armour was also slightly thinner than that of the Crusader and Stuart.
Posted by Mitch Williamson at 6:48 PM