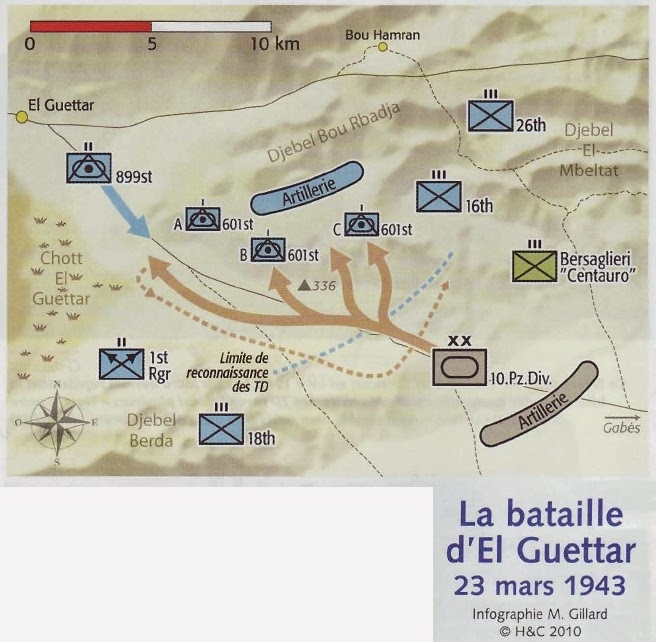 The 1st Infantry Division's part in the operations specified by 18 Army Group's instructions of 19 March was an attack east of El Guettar along the Gumtree road south of the Gafsañ Mezzouna mountains, to be launched after the 1st Armored Division had neutralized Station de Sened. This drive easterly from El Guettar was to be made down the great valley on a front which furnished a severe test of tactical efficiency and which broadened beyond the capacities of a single infantry division to defend or control.

From Gafsa to El Guettar, the road curves around the southwestern portion of Djebel Orbata (1165) and runs along its southern base past the Chott el Guettar to a road fork some twelve miles distant from Gafsa. At this fork, the road to Gabès branches off to the southeast, passing between the Djebel Berda (926) complex on the south and jumbled hills at the north which rise to the horseshoe-shaped Djebel el Mcheltat (482). The other branch, Gumtree road, continues along the southern base of Djebel Orbata and the ridge of which it is a part, and strikes across the coastal plain north of the Sebkret en Noual to Maharès on the sea coast. Three miles east of the El Guettar road fork, the Gumtree road enters a long narrow defile between a spur of the Djebel Orbata and the Djebel el Ank (621). Near the eastern end of the defile are the village of Bou Hamran and the junction with a track which leads through the mountain hamlet of Sakket and over the ridge to the village of Sened.

The 1st Infantry Division was expected to capture the defile at Djebel el Ank and to press eastward along the Gumtree road. It could not advance very far without becoming vulnerable to an attack up the road from Gabès on the southern side of Djebel el Mcheltat, an attack which could strike the division on the flank and either cut it off from Gafsa or force a withdrawal. The road to Gabès was connected with the Gumtree road by a dirt road through El Hafay at the northeastern end of Djebel Chemsi (790) some twenty-five miles east of El Guettar. A force from either Gabès or from a point much farther north could therefore approach El Guettar from the southeast, via the Gumtree road and its El Hafay connection with the GabèsñGafsa road. The 10th Panzer Division, once it had assembled, could strike either at Maknassy or toward El Guettar and, if the latter, then by either the Gabès road or the Djebel el Ank defile.

After a day of reconnaissance, observation, and preparations, the 1st Infantry Division opened its attack on the night of 20-21 March. To capture the defile on the road to Maharès, the 1st Ranger Battalion was sent on a circuitous and difficult ten-mile detour over the shoulders of Djebel Orbata which brought it back to the road at a point east of the Italian defenders for a surprise attack from the north.45 At the same time, the 26th Infantry, aided by artillery preparation and the cover afforded by foothills and great rocks, pushed straight along the road, closing in to gain a complete victory. The Americans took over 700 prisoners and after converting captured positions for defense toward the east, continued the attack in order to gain control over all of Djebel el Ank before going on to Bou Hamran.

The 18th Infantry's attack moved southeastward along the road from El Guettar to Gabès and into the adjacent hills against elements of Division Centauro. At night, and under a hazy moon, the infantry crossed a plain where mere six-inch grass was the main cover, and where the enemy had already demonstrated that his observation in daylight was alert and accurate, and his artillery fire swift and precise. Getting through a mine field, the troops infiltrated past Hill 336 north of the road to take it at daybreak with a rush from the rear. General Patton and some of his staff visited the hill soon afterward. The first stage of the attack "according to plan" yielded 415 prisoners. During the remainder of 21 March, the 18th Infantry, limited by the enemy's rapid laying of artillery fire on moving men, and by very active air strafing and dive bombing, particularly of command posts and artillery positions, strove to press through foothills onto the Djebel el Mcheltat. Battery A of the 33d Field Artillery Battalion lost two 105's and two vehicles in a direct hit. At noon, 21 March, the divisional objective was established as a line from a crest three miles northeast of Bou Hamran to a point about fourteen miles to the southeast of El Guettar, a road junction east of Djebel el Kheroua (369). Casualties by nightfall were fourteen killed and forty-one wounded.

The Americans during the next day consolidated their gains east of El Guettar, for the Italians made no resolute counterattack and were driven off by artillery fire and Allied air action whenever their guns opened up or small groups of their tanks assembled. American advance was not as rapid as had been expected. The troops improved their positions along the Gumtree road by having the 26th Infantry probe east of Bou Hamran. The 16th Infantry occupied the western foothills of the Djebel el Mcheltat, and two battalions of the 18th Infantry occupied heights south of the Gabès road, at the northeastern tip of Djebel Berda. Contact with the enemy in this area late in the day (22 March) promised action of about the same tempo for the following morning.

The operations by II Corps had been so well correlated with attacks by British Eighth Army as to make 22 March a critical day for the enemy. The seizure of Gafsa on 17 March had coincided with initial British exploratory attacks in the Mareth coastal sector. The capture of Station de Sened on 20-21 March had occurred while British 30 Corps began trying to punch through the Mareth Line and when the New Zealand Corps was about to seize Hill 201 south of El Hamma. By the time the 1st Armored Division reached Maknassy on 22 March and the 1st Infantry Division pushed beyond El Guettar, the enemy was committing some of his reserves near Mareth and sending others to the El Hamma gap. He had only one mobile division available with which to try to check the American approach to the Gabès area, the 10th Panzer Division (-) (Gen. Fritz von Broich). On 21 March, as noted, Army Group Africa released the 10th Panzer Division to the German Africa Corps for employment in a counterattack toward Gafsa. It was not apparent to the Allies where this attack would be made, although they were aware that it was building up. Actually, the German force assembled during the night of 22-23 March near Djebel Ben Kheïr (587, east of El Hafay). At 0300 the 10th Panzer Division attacked along the axis of the Gabèsñ Gafsa road to push northwestward  against the southern flank and perhaps the rear of the 1st Infantry Division before daylight.
Posted by Mitch Williamson at 2:12 PM