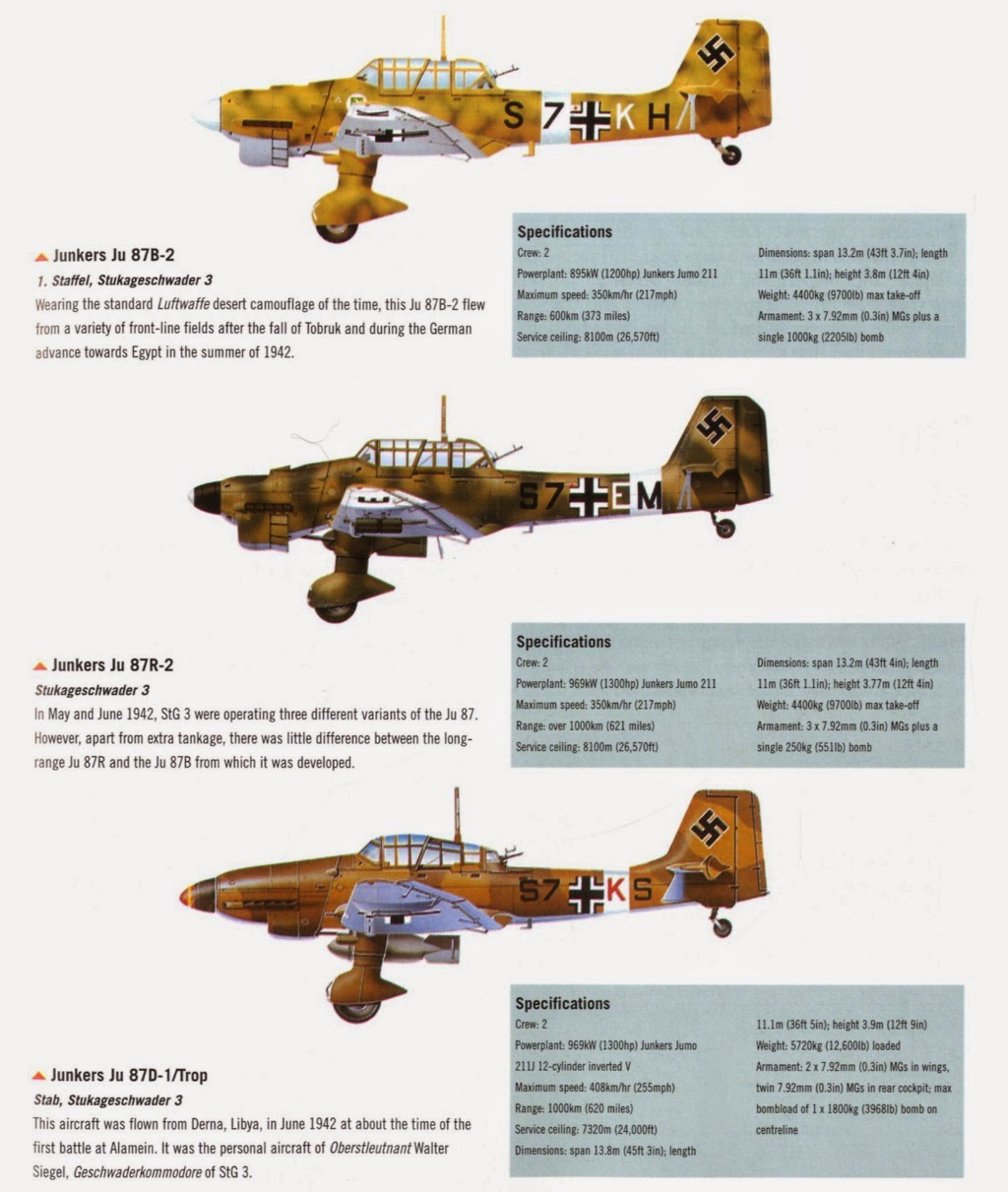 On 3 June 1942 StG 3's Ju 87s attacked Bir Hacheim. But though their bombs hit the target, this southern buttress of the British Gazala line with its cunning layout of pillboxes, field and anti-tank and anti-aircraft positions totalling 1,200 units, still did not fall. Rommel, whose whole further advance was thereby threatened, called daily on the "Fliegerführer Afrika", Lieutenant General Hoffmann von Waldau, for the Stuka attacks to be stepped up.

But the enemy knew equally what was at stake. Air Vice-Marshal Coningham pitted the fighters, fighter-bombers and bombers of the Desert Air Force repeatedly against the German assailants and their bases. Sigel's StG 3 suffered severely, losing fourteen Ju 87s in a week. And the worst of it was that their own attacks were wasted owing to the failure of the troops to follow up in strength. Despite all the promptings of his commanders, Rommel declined adequately to reinforce the besieging forces, and General von Waldau angrily reported to Kesselring that thanks to the lack of co-ordination the Stuka raids were virtually pointless and unnecessarily costly.

Kesselring flew forthwith to see Rommel and complained. Thereupon Rommel committed Colonel Wolz's Flak Regiment 135, which had just been engaged in parrying savage British armoured attacks on the German east flank. When even that failed to help, he was obliged to withdraw combat groups from the main push to the north and pit them too against "this confounded hole in the desert".

At last the ground attack made headway, and on June 9th a whole fortnight since the start of the German-Italian offensive, the Stukas hammered Bir Hacheim again. A battery position one and a half miles north of the fortress was badly hit, and that evening von Waldau reported to Rommel: "We have now flown 1,030 sorties against Bir Hacheim in support of your Army." But next day three more assaults by all available bomber units were ordered. To reinforce them Kesselring sent over LG l 's Ju 88 Gruppen from Greece and Crete.

The first attack had to be broken off because the pilots were unable to differentiate between friend and foe owing to smoke and dust. But at midday and in the afternoon the other two waves went in, with 124 Ju 87s in the first and seventy-six Ju 88s in the second. 140 tons of bombs fell on the brave Frenchmen's positions, and this time the bombing was accurate. Before the dust and sand had cleared, the infantry and sapper units launched their assault.

As protection for the bombers 168 Messerschmitts were airborne, and for the first time in Africa encountered Spitfires. Marseille once more accounted for four of the enemy, bringing his personal score to eighty-one. During the night General Koenig and a part of his garrison broke out from the fortress and fought their way through to the British lines. And next morning, June 11th, Bir Hacheim put out the white flag.

Rommel had at last secured his rear. In the next three days he pushed north behind the British Gazala front, and on the 14th General Ritchie had to pull back his divisions. The Marmarican battle was decided. Part of the Commonwealth troops withdrew to Tobruk; the bulk, by-passing Bir Hacheim, swiftly retreated farther east. Apparently disregarding Tobruk, still un-captured on his left flank, Rommel took up the pursuit of the battered enemy towards the Egyptian frontier.
Posted by Mitch Williamson at 7:52 PM