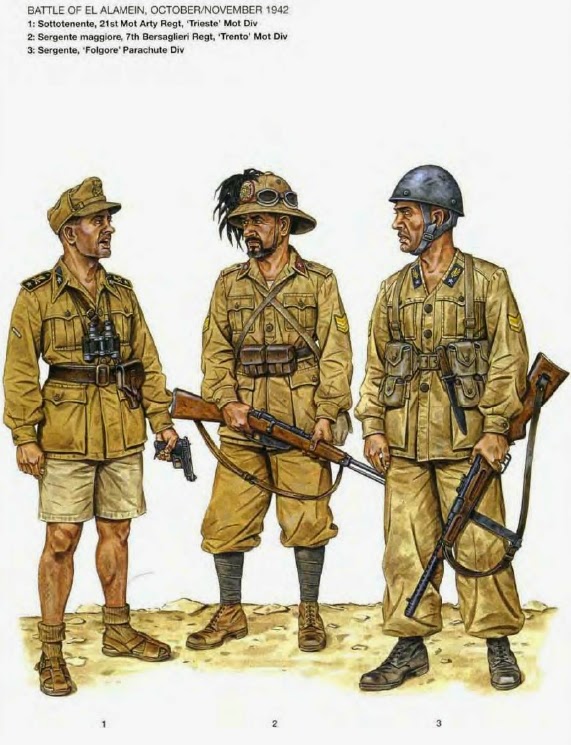 Axis troops had poor quality food and lacked gasoline and water. Supply was difficult because the depots were 250 miles away. Heat, dysentery, fevers, and clouds of flies tortured the troops. Moreover, they all knew that the longer they waited, the more the enemy was reinforcing its position. In August, Rommel was informed by SIM, the Italian intelligence, that the next British attack was foreseen coming after October 20. The new British commander, General Montgomery, was perfectly aware of the forthcoming American-British landing in Morocco in November. Under these circumstances Axis forces had clearly to retreat. It was not necessary to lose lives and materiel in a battle. It was worth the wait, but Montgomery decided Britain had to demonstrate its ability to defeat the Germans and, on October 23, 1942, he launched Operation Lightfoot.

The first British action was against the southern flank of the Axis forces. The Italians repelled the attack. The British lost 600 men and 120 tanks. Montgomery did not stop. He slowly increased pressure and widened the front. On November 1, however, he launched Operation Supercharge. It practically destroyed the Littorio and German 15th Tank Divisions. The Ariete and German 21st Tank Divisions arrived, halting the British advance, but in the evening the Axis possessed only 187 tanks; and 155 of them were the little ineffective Italian ones.

On November 3, Rommel ordered the retreat. Germans troops withdrew, using all the former British vehicles taken at Tobruk. The four German divisions were near the coast road, enabling them to escape. The Italian divisions moved through the desert, with British tanks on their heels. They were destroyed. The Brescia, Bologna, Pavia, and Trento Infantry Divisions and the Littorio Tank Division simply disappeared in a hail of fire and shelling. The Ariete had to protect them. It still had 111 tanks and 12 self-propelled howitzers. On November 3, Eighth Army continued the attack. Ariete counterattacked; and the fight was scattered throughout the desert. At 3:30 p.m., Rommel received its farewell: “Enemy tanks made a breakthrough south of Ariete. With this, Ariete is surrounded. It is some five kilometers northwest of Bir el Abd. Ariete tanks fight.”

In the night, the XIII Tank Battalion continued fighting. Its last six tanks aggressively defended Fuka station on November 6 against the 1st, 7th, and 10th British armored divisions. They were ultimately destroyed. The same day the Folgore Division surrendered. After having shot literally all its rounds, despite the paratroopers asking to fight with bayonets and hand grenades, the commander ordered them to lay down their arms. The surviving 34 officers and 272 men received British military honors. They had arrived from Italy with 5,000 men.

The Allied landing in Morocco meant the end of the French government established after the 1940 armistice. Germany and Italy occupied Vichy-owned territories, including Algeria, Tunisia, and Corsica. Despite Italian pleas not to leave Tripoli, Rommel ordered his troops to Tunisia. Then he moved west. On February 14 he attacked and defeated the Americans at Kasserine Pass. At the same time, beginning in January 1943, the Italians began to establish a defensive line on the Tunisian-Libyan border, using the existing French fortifications. On February 20, 1943, General Messe, former commander of the CSIR, took charge of the First Italian Army in Tunisia.

The following months saw the desperate Axis forces attempting to prevent the Allied eastern and western fronts from joining. Rommel was recalled to Germany and left General von Arnim in his place.

In the last days of April, Montgomery took Takruna and Enfidaville, the last Axis outposts on the road to Tunis. Messe concentrated his troops in the Gebel Garci mountains and prevented him from advancing any farther. Montgomery waited until Allied forces coming from the west broke von Arnim’s troops on May 6 and 7. They then captured Tunis and Bizerte. On May 11 the Afrika Korps was reduced to scattered units while the XXI Italian Corps surrendered. Von Arnim sent Messe his farewell. The XX Italian Corps continued to resist till the day after, May 12, while Rome authorized it to surrender: “Today it has been a splendid day for our artillery. They shot all they still had. Then, before evening, we have heard different detonations. It was ammunition used to blow up the guns.” The following day, May 13, 1943, Italy’s war in North Africa ended.
Posted by Mitch Williamson at 11:21 AM