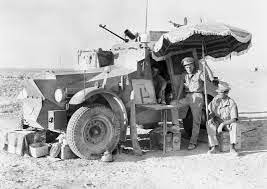 Officers of the 11th Hussars use a parasol to give shade during a halt, while out patrolling on the Libyan frontier, 26 July 1940. The vehicle is a Morris CS9 armoured car.

In Egypt the declaration of war found the armoured cars of the 11th Hussars (Prince Albert's Own) tinder Lieutenant-Colonel John Combe lying close by the frontier. With instructions to raise hell, they immediately crossed the fence of barbed wire built by Italian engineers along the 400-mile (644km) border. In a series of dashing hit-and-run raids, they attacked forts and shot up transport columns, capturing bewildered soldiers whom nobody had bothered to inform about Mussolini's declaration. By dawn on 12 June, all their patrols had returned, bringing with them 70 prisoners and having suffered no casualties. More importantly, they had established a moral superiority over the Italians.

Encouraged by this start, plans were made to assault Forts Maddalena and Capuzzo; the attacks were launched on 14 June. Joined by elements of 4th Armoured Brigade commanded by Brigadier J. R. L. 'Blood' Caunter (named after his favourite exhortation 'Buckets of Blood!') and 1st Battalion, King's Royal Rifle Corps, Fort Maddalena fell without a shot being fired, having already been abandoned by all but 18 of the garrison. Fort Capuzzo offered some small resistance, but its 226 men also surrendered without bloodshed. Of some significance was the result of an encounter with six Italian Fiat-Ansaldo LS Tankettes. These were engaged with a Boyes anti-tank rifle, which knocked one out immediately while the others ran 'like a lot of little pigs'.

Two days later, two troops of 11 H were 'swanning around' between Sidi Omar and Fort Capuzzo when one troop encountered an Italian column of 12 L3s and 30 lorries, apparently on their way to re-garrison the fort. At almost the same time, the second troop reported another column of 17 L3s and 40 lorries heading to meet the first. Although the squadron commander ordered them to withdraw, the two troops had eagerly charged forward to engage the enemy. During a brisk skirmish, they managed to knock out three of the L3s before retiring behind a slight rise when the column produced a field gun. Combe quickly gathered all the available reserves, including a mixed squadron of Light and Cruiser tanks from 7th Queen's Own Hussars, and an anti-tank troop of the Royal Horse Artillery from 4 Armd Bde, and rushed to join the action. When he arrived at the rise, he was staggered to see the column (the second one never appeared) some three miles away on a completely open plain, formed up in square as if fighting colonial tribesmen.

Unsure if the Italians had more artillery, Combe sent forward some of the tanks who were fired at by the single grin and charged by the L3s. These were knocked out with one shot each, whereupon the tank circled the square in Red Indian fashion, shooting up the unprotected infantry and lorries. They made two complete circuits before the Italians revealed hidden guns at each corner. After a bitter but intense firefight in which the gallant gun detachments were shot down to a man, the square broke, only to be promptly rounded up. Barely 100 men and a dozen lorries were left to make the sad .journey into captivity. Thus ended the 'Battle' of Nezuet Ghirba. Among the dead was Colonello D'Avanso whose pocket yielded his orders. They were to 'destroy enemy elements which have infiltrated across the frontier, and give the British the impression of our decision, ability and will to resist'.

The free-wheeling continued until the end of July, by which time the Italians were deploying heavy all-arms columns supported from the air. Steadily, their strength was increasing, including support from a few MI 1/39 tanks and invariably from their efficient and brave artillery. At sea, the Royal Navy shelled a flotilla of minesweepers in Tobruk harbour, an action admired by an 11 H patrol on the beach, only 100 miles (161 km) behind enemy lines! Apart from continuous anti-submarine operations, the RN encountered no surface opposition and bombarded Bardia on 21 June. The Italians retaliated with night air-raids on Alexandria and Aboukir. A week later they attacked Royal Air Force bases at Sidi Barrani and Mersa Matruh, whose Gladiator fighters matched the opposing Fiats. But they failed to launch an effective air campaign, either against the RAF or against vulnerable Allied shipping.

Desert conditions impose considerable wear and tear on equipment, especially on vehicles, and in mid-August, 4 Armd Bde was withdrawn and replaced by 7th Armoured Brigade and 7th Armoured Division's Support Group under Brigadier M: H. E. 'Strafer' Gott. His orders were to maintain observation and impose delay with his two infantry battalions, artillery regiment and supporting elements. 11 H were ordered to reduce their activities and rest half their number. Neither side had made any territorial acquisitions but the opportunity had been there for the testing of equipment, techniques and, most importantly, of men. Both sides suffered from technical deficiencies but where the Italians had the benefit of superior numbers, the British undoubtedly held a professional and moral advantage. The first three months of the campaign saw the British inflict 3,500 casualties upon the Italians for the loss of just 150.