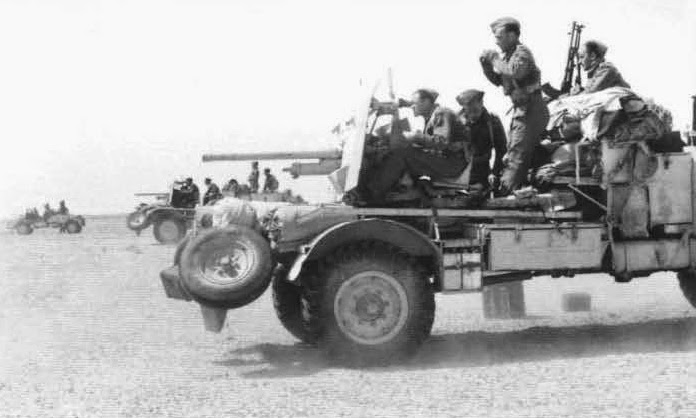 Lorry-mounted 2-pdr anti-tank guns on a practice shoot in the Western Desert. 3 May 1942.The 2-pdr antitank gun equipped RA anti-tank regiments and later infantry battalions for much of the Desert War. This 10mm-calibre weapon was mounted on an ingenious three-legged carriage, giving it a low profile and which allowed the travelling wheels to be lifted clear of the ground so that the gun could easily traverse through 360 degrees. An armoured shield fined with an ammunition box protected its 5-man detachment and it weighed 1,760 lb. in action. Many were carried portee on the back of lorries during the Desert War. but when used this way often proved vulnerable to both small arms and shrapnel. Firing a solid AP round and with a penetration of '40mm at I,000m, the 2-pdr was highly effective against lightly armoured cars and tanks, but as the Desert War progressed it was quickly outclassed and could only engage with a hope of success from the flank at close range.

The Eighth Army still had a major training deficit when it was first formed and was still largely unable to practise fast-moving armoured warfare and combined-arms operations. Indeed, following the disappointing Operation Battleaxe Auchinleck deliberately resisted pressure to commit Eighth Army to battle before progress had been made in remedying this serious fault. As one historian has observed: 'Battleaxe was for the more experienced British armoured units, and above all for higher commanders ... a grim lesson in how expert one now needed to be to wage war, and how long a lead the enemy seemed to have acquired. The British Army was still inadequately trained.' Indeed, Eighth Army was still badly in need of an effective battlefield doctrine for waging a fast-moving armoured warfare under the conditions imposed by the Desert War. It also needed intensive, appropriate training given the wide variation in training standards in living, moving and fighting under desert conditions.

The standard of training and overall battle worthiness of formations serving in Eighth Army varied widely. 7th Armoured Division and 4th Indian Division still provided a highly experienced hardcore in November 1941. A combination of battle casualties, sickness and cross-posting of officers. NOS and men, as the entire British Army underwent massive expansion, meant that while still good neither of these formations was of the same high quality. The remainder of Eighth Army was of widely differing combat effectiveness, however, with many having much to learn. 22nd Armoured Brigade in October 1941 still lacked training as a brigade in the totally unfamiliar conditions of the desert. 1st South African Division, commanded by Maj. Gen. G.E. Brink, was thrown into battle during Operation Crusader before it was really ready for action and suffered accordingly. It was deemed insufficiently trained under desert conditions, largely as it had not received all its motor transport. As Norrie reported on 2 November: 'The spirit of the division and the desire to fight could not be better. However, unless more time for desert training is provided, I cannot see how this division can be expected to succeed on the battlefield.' Such problems were exacerbated by the frequent chopping and changing of units and subordinate brigades between brigades, divisions and corps. It meant few units or formations had had an opportunity to get to know or operate alongside each other before battle began and prevented building up institutional experience and amassing experience.

The British paid a heavy penalty for lack of training during Operation Crusader, although the battle was ultimately a success. The Germans certainly thought Eighth Army troops were good basic material. A German battalion IC later wrote: 'The English and Australians are tough and hard opponents as individual fighters, highly skilled in defence, unimaginative and inflexible in attack, cold-blooded and skilled in in-fighting, experienced in assault, and capable of standing hardships of all kinds.' The Germans firmly believed, however, that the overall poor combat performance of Commonwealth troops was primarily due to lack of training. This was a powerful and accurate critique. A serious effort was made to improve during the spring of 1942, but was largely overtaken by events. The level of training in Eighth Army did not undergo massive improvement for a considerable period of time. By the time of Gazala, battle had taken its toll and the remainder had been replaced by a large influx of inexperienced, ill-trained new blood, who were thrown into battle before they were ready.

The lessons learnt during Operation Crusader about fighting methods and doctrine were eagerly studied, especially since they revealed that much remained to be done in terms of training, with particular problems highlighted. In January 1942 the BGS Eighth Army directed: 'Every opportunity will be taken to carry out training ... so as to develop an established technique in this type of operation, and to ensure that different units can carry it out in combination even if they have not had an opportunity of training together beforehand.' To assist in instruction a Training Branch at GHQ Middle East was set up under Maj. Gen. John Harding, which set up and ran several training establishments teaching the lessons of the Desert War. Middle East Command also produced a series of Middle East Training Pamphlets to meet the demand for the latest up-to-date information, although technically in-theatre publications were forbidden by the War Office to prevent confusion and diversion from official sources of information. Several desert training areas were developed near lsmailia, Port Tewfik and the Pyramids for collective training by larger formations, especially those new to the theatre of war.

The ability to train formations before being committed to battle remained a luxury denied British High Command for most of 1941-12. Given the high tempo of operations for much of the Desert War and constant demands for fresh troops and equipment after heavy losses in battle, most new formations were thrown into battle as soon as they deployed in North Africa. Pleas to give them the three months collective training under desert conditions was simply ignored. Much, therefore, still had to be learned the hard and costly way - in battle. The inexperienced and poorly trained 1st Armoured Division was quickly destroyed south-east of Agedabia, for example, when DAK struck back after Crusader. The British High Command knew what was needed, but an opportunity to effect real and meaningful changes and remedy the continuing training deficit was largely denied them. The hurly burly of the Desert War simply robbed British commanders at all levels of a sufficiently long quiet inactive period for rest, reflection and training. While some meaningful instruction was carried out by some motivated commanders of formations out of the line for rest it was not enough. Indeed, not everyone was clear about what was happening and how to correct battlefield mistakes. Logistical problems and shortages of equipment hampered training efforts. Petrol shortages and fear of wear and tear to vehicles was also a problem.

The Eighth Army Montgomery inherited in August 1942 had made considerable progress in improving overall training standard, but was still in need of work. Indeed, the new GOC quickly judged his troops as being 'somewhat untrained' with the result that he scaled back his original plans for his offensive as he feared he might be asking too much of them. Following the Battle of Alam Haifa Montgomery had an opportunity denied previous commanders of Eighth Army to carry out a period of rigorous training needed to prepare for the offensive that drove the Axis out of Egypt and Libya. In some respects the scope of training required was more limited given the breakthrough battle planned. As a result, with only a short time before battle began, he insisted it focused on the type of battle that lay ahead at EI Alamein. To do so the armoured divisions and New Zealand Division in 10th Corps were withdrawn behind the lines, but the remainder were tied down in the forward defences at EI Alamein. To give them some instruction, a complex system of reliefs was arranged a brigade at a time. The importance of combined-arms training was clearlyrecognized by the new COC. In an Army Training memorandum issued on 30 August 1942 he directed: 'It cannot be emphasised too strongly that successful battle operations depend on the intimate co-operation of all arms, whether in armoured or unarmoured formations. Tanks alone are never the answer; no one arm, alone and unaided can do any good in battle.' Great attention was paid to passing through minefields at night. An Eighth Army Minefield Clearance School was formed to study and train for this specialized task.

The careful training carried out before Second EI Alamein built enormous confidence and in turn reaped enormous dividends throughout the remainder of the Desert War. Training remained an ongoing process as new lessons were learnt. By the end of the war in North Africa Eighth Army had achieved a new confidence, professionalism and skill it had never possessed before, which stood it in good stead for the invasion of Sicily and the Italian campaign.
Posted by Mitch Williamson at 7:03 PM