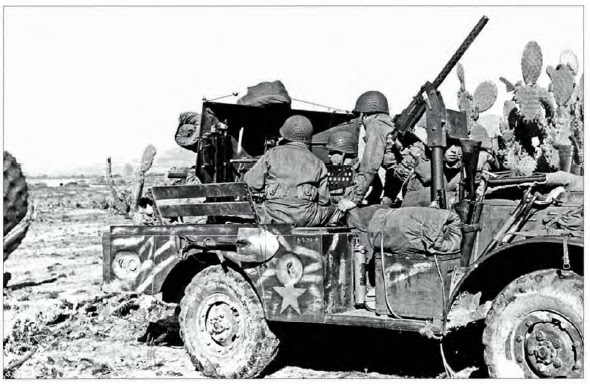 The M6 37mm GMC immediately proved to be inadequate during the fighting in Tunisia since its gun was too puny to deal with contemporary German tanks and the vehicle configuration was ill-suited to actual combat operations. It was hastily withdrawn from service as soon as more suitable equipment became available.

With every big game or war the players who first take the field must fight first with their own nerves.
Wirt Cunningham, 86, of Oakland is acquainted with the business of being first at war with untested mechanized artillery against an enemy that had been making war for years.

At dusk Feb. 14, 1943 — a little more than three months after the U.S. and Allied forces had arrived on the shores of North Africa — 17-year-old Cunningham was fighting off sleep when a 91st Field Artillery Battalion guard carried word to Cunningham's anti-tank gun section of the approach of an estimated 200 German Panzer tanks and thousands of German patrols.

The location was the Djebel Lassouda Crossroads in Tunisia. The ensuing fight would be a prelude to a battle recorded in World War II history as the Battle of Kasserine Pass — the first major confrontation of U.S. and German armies.

The battle did not end well for the U.S. and revealed major weaknesses in U.S. armor and weaponry. A senior leadership deficiency would cost II Corps commander Maj. Gen. Lloyd Fredendall his job.
But the battle earned Cpl. Cunningham a recommendation for the Congressional Medal of Honor from the 91st FA's Capt. Warren B. Pirnie Jr.

Fifth Army commander Gen. Mark Clark accepted the recommendation, but granted the Army's Silver Star instead. Cunningham says he's proud of the Silver Star, three Bronze Stars and the two Purple Hearts he earned during the war, but he admits he still feels "slighted" by Clark who, he says, seemed to show favoritism to other units of the Fifth Army.

The 91st Field Artillery Battalion was attached to the Army's 1st Armored Division.

What happened
"The main tank force was bearing down at 1,000 yards to my right front and two Mark IVs were coming parallel to my position at about 150 yards," Cunningham said. "I loaded and fired an armor piercing round into the lead tank's track knocking it off its bogie wheel.

"When the tank commander opened the hatch on the turret I put a high-explosive round on the hatch cover.

Cunningham said the second tank stopped to see what was wrong with the first tank, and he hit that tank in the same places with the same kind of projectiles.

"No one got out of either of those tanks," he said.

Those two hits occurred within a frame of about two minutes. Three other men in Cunningham's anti-tank gun crew had recognized the overwhelming force of the German column coming at them and fled.

Young Cunningham had made the rank of T-5, was commander of an anti-tank gun crew and would not run.

"When they ran and I saw what was coming I shot those two and then I just went out of my mind." Cunningham said. During the two minutes of target practice on the lead tanks, Nazi tanks armed with 88-millimeter guns that shot with rifle-like accuracy, had rolled into range for firing on Battery B, an outfit of 225 infantry patrols around six 105 millimeter Howitzers, hidden away from German tank sites in a gully.

"I began to receive fire from the main column, so I moved a couple hundred yards and fired on the main column, then moved again and fired again," Cunningham said. "I was on top of the slope above the battery position that had a rock dike about four feet high running along the top of the slope.
"I kept moving and firing from behind the rock dike until my ammunition was gone," Cunningham said.

In Pirnie's nomination of Cunningham for the CMO, the captain said annihilation of the 91st Battery B was certain if not for Cunningham's pattern of movement and shooting that apparently led the column commander to stop the column briefly to assess the size and location of the force firing against them.

Cunningham alone had given Battery B the window it needed to escape the poor fighting position in the gully, Pirnie said.

Pirnie, now 92, of Springfield, Vt., said the amount of machine gun fire that hit the anti-tank gun shield was so intense the heavy plate steel withered to resemble the surface of aluminum foil that had been crumpled and straightened out repeatedly.

How one round from all that fire did not find Cunningham was "a miracle of war," Pirnie said.
Out of ammo except for 20 rounds of anti-personnel double-aught shot, Cunningham fired up the Jeep-drawn gun and headed for the hills away from the column, along the way picking up two members of his crew, Tom Arnold and Sam Ray, and Capt. Pirnie. The four dug in about seven miles from the first encounter and camouflaged the gun until nightfall. Just before dark, an 8-man German patrol approached the gun position, Cunningham said.

"They stopped about 50 feet in front of us and began talking among themselves," Cunningham said. "I had Ray load for me. We eliminated that patrol."

The newly reformed gun section traveled a course that night they believed would be parallel to the course the tank column was taking toward the town of Sabetla. The four passed the tank column during the night and arrived at Kasserine Pass before the column arrived there.

They also found "what was left" of their battery at Kasserine, Cunningham said.

Cunningham fought with the 91st and other elements of the Fifth Army through major battles at Anzio and Cassino. His ears still ring today from a close encounter with a projectile fired from Anzio Annie, one of 25 Krupp K5 cannons built for the war. The big gun features a rifled barrel 70 feet long and a bore width of just shy of a foot at the muzzle.

Route to war
Cunningham provided fictitious information to a recruiter to join the Army on Aug. 7, 1940, at the age of 15 years, eight months and five days.

"I was six feet four inches tall and weighed 125 pounds," Cunningham said. "Life around Stuebenville (Ohio) wasn't so easy, and I was crazy about the Army. The Army had the cavalry and horses. I wanted to be around the horses.

"And besides that, you could get something to eat," Cunningham said.
"Boy, was I disappointed when I found out there wasn't a cavalry with horses."
He had missed the cavalry and horse drawn artillery by just five years. The Army converted to a fully mechanized field artillery between 1935 to 1936.

Post war
Cunningham returned to Ohio, attended junior college in Youngstown, Ohio, made the school's basketball team and worked and studied before transferring to the University of Colorado for a basketball scholarship. He took the UofC's bachelor of arts degree in geology.

With his college degree he moved to California and soon found work in the engineering/excavation business and began acquiring heavy equipment for his own venture. The venture would make Cunningham one of southern and central California's biggest heavy equipment dealer/operators. In the midst of increased pressure to put his company up for a public stock offering, Cunningham sold the business and spent six years ending in 2001 as owner/operator of a horse ranch in Canoga Park, an incorporated area within the city of Los Angeles.

Cunningham his wife, Jean, have been married 42 years. They have raised two sons.
fwallis@baxterbulletin.com
Posted by Mitch Williamson at 2:04 PM