The Afrika Korps: Beaten and Running 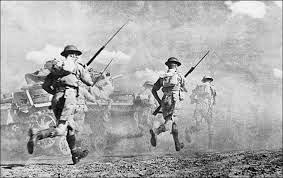 A dangerous retreat for the Panzerarmee Afrika.

On 31 October, Montgomery renewed the attack with strong support from the Royal Air Force. Critically short of fuel and ammunition, Rommel was forced to disengage on 3 November. The following day, the 1,400-mile Axis withdrawal to Tunisia began.

For the next three months, Montgomery followed rather than aggressively pursued Rommel and the Axis forces across the northern coast of Africa. Rommel reached the Tunisian border at the end of January 1943. By the time he got there, however, another Allied force was waiting for him.

Once Rommel’s Panzerarmee Afrika crossed into southern Tunisia, it occupied positions in the old French fortifications of the Mareth Line. Rommel’s 10 divisions were well below half strength, with a total of only 78,000 troops and 129 tanks. Before he had to face Montgomery, rapidly closing from the rear, Rommel intended to eliminate the threat of the British First Army to his north. On 14 February, the Germans launched the first leg of a two-pronged offensive, with von Arnim’s forces attacking through the Faid Pass for Sidi Bou Zid. The following day, Rommel in the south attacked toward Gafsa. The bulk of Rommel’s forces, however, remained along the Mareth Line. By 18 February, the Kasserine Pass was in Axis hands, and the U.S. Army had suffered its first major defeat at the hands of the Germans. Rommel tried to advance north through the Kasserine Pass on 19 February, but he did not get the support he expected from von Arnim. Hampered by a divided German command structure and the rapidly massing Allied reinforcements, the attack stalled.

The Allies recaptured Kasserine Pass on 25 February. Rommel returned to the Mareth Line and prepared to face Montgomery. When the Eighth Army reached Tunisia, the Allies reorganized their command structure along the lines agreed to at the Casablanca Conference. General Eisenhower became the Supreme Commander of all Allied forces in the Mediterranean west of Tripoli. Alexander became Eisenhower’s deputy and simultaneously commander of the 18th Army Group, which controlled the First and Eighth Armies, and the now separate U.S. II Corps commanded by Patton. On 24 February, the Axis powers also realigned their command structure, with Rommel becoming the commander of Armeegruppe Afrika, which included the Afrika Korps, von Arnim’s Fifth Panzer Army, and the Italian First Army under General Giovanni Messe. For the first time, the Axis powers had a unified command structure in Africa.

Montgomery’s units crossed into Tunisia on 4 February, reaching Medenine on 16 February. Hoping to catch the British off balance, Rommel on 6 March attacked south from the Mareth Line. Warned by ULTRA, Montgomery was ready. Immediately following the failure of the Medenine attack, Rommel returned to Germany on sick leave.
Posted by Mitch Williamson at 2:35 PM