South-African Forces in North Africa I 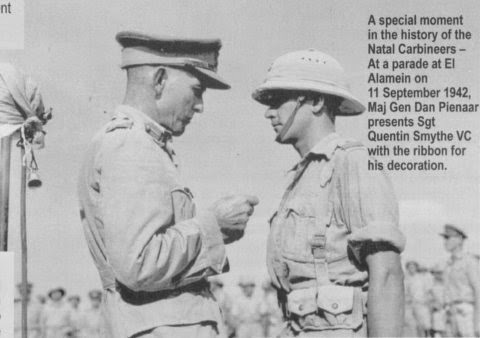 During the North African campaign, South Africa committed two divisions and an air wing. The first South African soldiers to arrive in Egypt, Pienaar’s First Brigade, established a headquarters at Amariya in May 1941 and were soon incorporated into Britain’s new Eighth Army. By September 1941 there were 60,000 South African soldiers, including 15,000 blacks, in Egypt. In November 1941 the British launched an offensive, known as Operation Crusader, along the Egyptian-Libyan border to relieve Tobruk where a mostly Australian garrison had been holding out against an Axis siege. The First South African Division was part of this push. This offensive culminated in a large and chaotic tank battle in the open desert around the Axis airfield at Sidi Rezegh, south of Tobruk, in late November. During a German-armored thrust that eventually failed to throw back the Allied advance, the Fifth South African Infantry Brigade was overwhelmed with 3,000 men killed, wounded, or captured. This outcome represented the worst single loss in the history of the Union Defence Force and caused considerable anxiety in South Africa where Afrikaner nationalists put an ultimately unsuccessful motion to quit the British Empire before parliament. In December the newly arrived and poorly equipped Second South African Division, commanded by South African Police Commissioner Major General I. P. de Villiers and with two infantry battalions of South African Police, made a number of unsuccessful assaults on the besieged Axis border strongholds of Bardia, Sollum, and Halfaya. These operations had been hampered by Eighth Army desires to limit South Africa casualties because of political issues and problems with acquiring replacements. Supported by the heaviest Allied bombardment of the campaign up to that time, South African infantry and British tanks penetrated the Bardia defenses on New Year’s Eve 1941, and after intense fighting the Axis garrison, which outnumbered the attackers, surrendered on January 2, 1942. South African casualties amounted to 132 killed and 270 wounded, and 7,775 German and Italian soldiers were captured. Later in January the Second Division took Sollum and Halfaya in order to secure Allied supply lines. The capture of Bardia and Sollum liberated 1,246 Allied captives, and in all three operations a total of 13,842 Axis prisoners were taken.

During January 1942 Axis forces retook the initiative and the Allies, in early February, pulled back to the Gazala Line, a series of widely spaced strong points just west of Tobruk. The First South African Division was assigned the extreme northern section of the line, and the Second Division was held in reserve at Tobruk in anticipation of a renewed Allied advance. At this time the Fourth and Sixth South African Armoured Car regiments were attached to the British Seventh Armoured Division and 50th Division, respectively, and deployed as reconnaissance ahead of the Gazala Line. At the end of May 1942 an Axis offensive began with a feint on the First Division, under newly promoted Major General Pienaar, that quickly hooked around the southern portion of the Allied line resulting in the First Division joining a general Allied retreat. The Second Division commander, Major General Hendrik Balzaser Klopper, was placed in command of the entire Tobruk garrison, and as the other Allied forces moved east he was instructed to hold out against an Axis siege. Klopper had a week to oversee the reconstruction of the deteriorated Tobruk defenses. Antitank ditches and trenches had filled with sand, many of the position’s mines had been removed for use elsewhere, and a third of his men were logistical troops working in the harbor. Klopper lacked operational command experience as did the members of his staff who bickered among themselves. The result was a poorly prepared defensive perimeter in which one of three infantry brigades was uselessly placed along the coast, artillery was positioned too far from the front line, and transport vehicles were not camouflaged. The garrison gained false confident when, in its first engagement with the enemy, the Transvaal Scottish killed 80 Italians and took 200 prisoner. The Germans, under Erwin Rommel, initially appeared as if they were going to bypass Tobruk in pursuit of the fleeing Eighth Army. However, on the night of June 19, Rommel quickly repositioned his forces and launched a surprise armored and infantry assault that pierced the defenses and reached the port. German air support came in from all over North Africa and Crete, whereas the Allies did not have a plane in the sky. The majority of the South African soldiers, defending the western, southern, or coastal sections of the perimeter, did not fire a shot. Although Klopper sent a message to his western units that there would be a breakout, reports that German tanks were gathering for an attack on one of the South African brigades changed his mind. On June 21, 33,000 Allied soldiers of the Tobruk garrison, including 12,722 South Africans of the Second Division, surrendered. When the Germans allowed Klopper to address the Allied prisoners, they booed and heckled him for having sold out to the enemy. After the fall of Singapore to the Japanese, the loss of Tobruk represented the second largest British capitulation of the Second World War. Having famously been the only incident of the war to make Churchill wince, the surrender of Tobruk cast doubt on South Africa’s military prowess and loyalty to the Allied cause.

When some white South African officers demanded they be housed in separate prisoner compounds from black South Africans, Rommel refused and pointed out that they all wore the same uniform and would be kept in the same facilities. Among the South Africans taken prisoner was Lance Corporal Job Maseko, a delivery man from Springs who had joined the NMC. In late July Maseko and some fellow prisoners, while being forced to work at Tobruk harbor, sunk a moored German naval vessel by concealing an improvised explosive among petrol drums. He later received the Military Medal.
Posted by Mitch Williamson at 4:46 PM