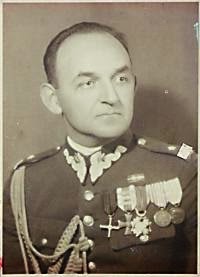 A French–Polish joint intelligence operation set up by Major Rygor Slowikowski after he escaped to France upon the defeat of Poland in Operation FALL WEISS (1939). Slowikowski worked for the French until the armistice of June 22, 1940. He then set up a spy network in North Africa in mid- 1941, believing that he was acting on orders from the Polish government-in-exile. But the London Poles were themselves acting at the behest of MI6. Later, the Office of Strategic Services (OSS) became involved. Slowikowski was remarkably effective running a network of local French agents across North Africa and parts of West Africa, under control of Polish intelligence officers who had joined him in exile.

Major General Mieczyslaw Zygfryd Slowikowski, codenamed Rygor, was a Polish intelligence officer who helped establish Allied spy networks in occupied France, and later, in German occupied North Africa. In July 1941, Slowikowski was transferred to Algiers where he set up and ran one of the War’s most successful intelligence operations, providing the vast bulk of the intelligence for Operation Torch, the 1942 Allied invasion of North Africa. This was the first joint Allied military operation involving both the British and the Americans, in the first large-scale Allied landings of the war. Although it is not as well known as the later operations in France and Italy, Torch provided a turning point in the war against the Axis powers. Slowikowski lit the fuse. His immense bravery and effort were later rewarded with the American Legion of Merit and an Order of the British Empire. This is his extraordinary story.

Posted by Mitch Williamson at 1:30 PM