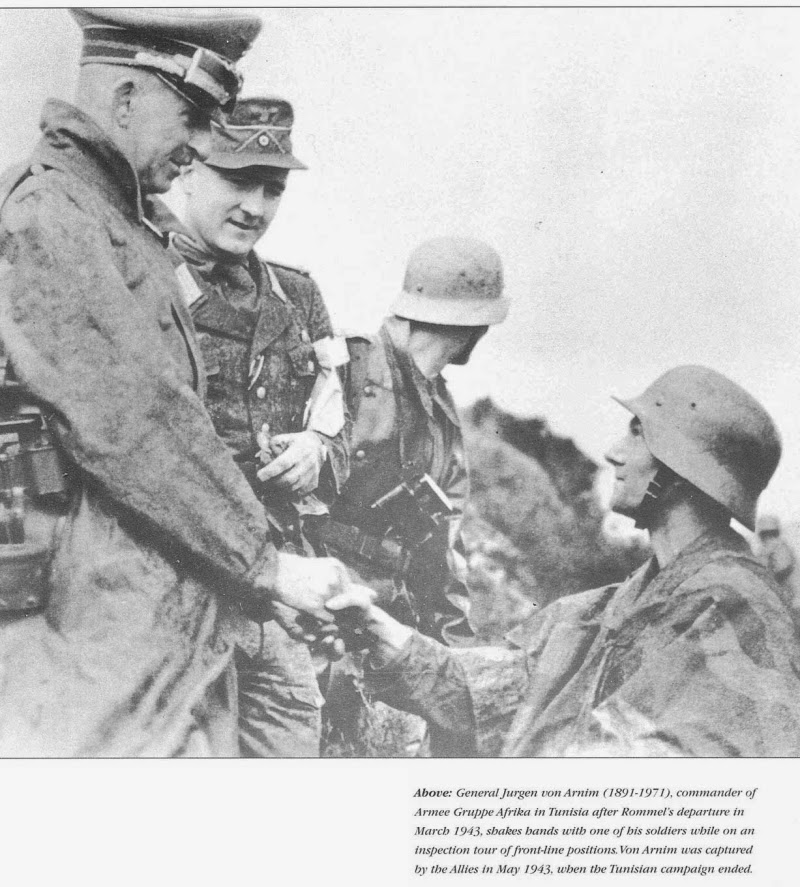 In 1939 the French protectorate of Tunisia declared its full support for France, and small numbers of Tunisian Tirailleurs fought under French command in Europe and Africa in 1940. When Italy declared war on France on June 10, 1940, French colonial troops briefly attacked into neighboring Tripoli from Tunisia. The defeat of France and armistice two weeks later forced them back out. Habib Bourguiba (1903–2000) formed a nationalist government in 1942, breaking with the Vichy governor. All nationalist and colonial argument was suspended by a German military takeover of Tunisia pursuant to the TORCH landings in Algeria by the Western Allies in November 1942. There followed heavy fighting in Tunisia during the first four months of 1943, until two German armies surrendered in May. After that, the Western Allies used Tunisia as a base for air operations and invasions of Sicily and Italy.

Adolf Hitler responded to TORCH by occupying the zone libre of Vichy France and immediately ordering large-scale reinforcements to Tunisia, where local Vichy authorities offered help rather than resistance to non- French invaders. By the end of December, 50,000 Germans and 18,000 Italians were added to the Axis order of battle in Tunisia. In following months an additional 100,000 Germans and 10,000 Italians followed. Strong Luftwaffe elements were also committed, and U-boats shifted from the great battle in the Atlantic that was peaking in the first five months of 1943. Why did he do it? Because he knew that Churchill and the British Chiefs of Staff were right: the Axis was vulnerable along its southern flank. In addition, he was as usual thinking offensively rather than about defense: he discussed with Field Marshal Erwin Rommel possibilities for joint action with the German-Italian Panzerarmee retreating in front of British 8th Army, and even spoke of an offensive against the Americans in Casablanca. For the moment, a race was on to build up forces for the coming fight over Tunisia. As a result of stiffening Axis resistance in Africa, the Western Allies knew well before the end of December that there could be no landings in France in 1943.

British forces spearheaded a weak thrust across the Tunisian border on November 16, but it was blunted by Axis troops from Bizerta and Tunis in sharp fighting lasting to November 23. An American attack was also stopped from November 25–30. The Germans then counterattacked, forcing the enemy to withdraw and consolidate during January 1943. The Western Allies looked befuddled. New divisions formed by a forced union of Free French and Armée d’Afrique troops needed time to mesh and properly equip. The British fought reasonably well, but green American troops and commanders did not. Fortunately for the Allies, the Germans and Italians were confused. In addition, as Rommel fell back in front of British 8th Army he played his usual prima donna role: he refused to follow orders from Italian superiors and even challenged the German theater commander, Field Marshal Albert Kesselring . Rommel then bickered with his counterpart in charge of Axis forces in northern Tunisia, Colonel General Hans-Jürgen von Arnim of 5th Panzer Army. And supply problems squeezed the Axis. Rommel gave a tactical bloodying to the Americans at the Kasserine Pass on January 20, but only as part of a failed counteroffensive that petered out before it could achieve the goal of splitting the enemy and cutting off the British spearhead. To the south, British 8th Army arrived and attacked the Mareth Line, sending New Zealand troops around its left flank by March 22. Montgomery halted his broad offensive against the Mareth position to reinforce the progress made by the New Zealanders, and thus got well around the Axis flank in force by March 27. That and follow-on attacks by 8th Army compelled Axis troops to abandon the Mareth Line on April 6.

Unaccountably, Hitler continued to reinforce as the Axis pocket around Tunis and Bizerta was violently compressed. By March, however, Western naval dominance of the Mediterranean sea lanes was such that Axis forces in Tunis could be supplied only by air. Allied aircraft and severe losses of German and Italian transport aircraft soon shut down even that route of resupply. The final assault on two hemmed and ragged Axis armies crammed into a Kessel in Northern Tunisia was led by British 1st Army, reinforced by veteran divisions from 8th Army. The British attack was supported by American and French corps on the flanks. Lead units of 1st Army broke the German position at Tunis, which was then liberated by French forces. U.S. 2nd Corps cleared Bizerta as forlorn Germans and Italians, some of whom fought longer than their German partners, began surrendering in large numbers in the first days of May. When TORCH campaign was over the Allies were surprised how many prisoners they took: over 275,000, along with great stocks of war matériel. They had also severely attrited Italian maritime and German air transport assets. It took five months longer than planned or expected, a protracted delay caused primarily by American inexperience, German toughness, and the fact Hitler unexpectedly and strongly reinforced Italian strategic failure in the Mediterranean. The end result of that choice was that Germany lost two armies in Tunisia, each of which would have been far better employed defending much tougher terrain in central and northern Italy, or used along the Eastern Front.