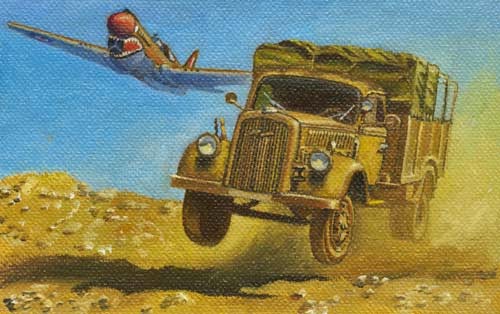 Opel "Blitz" (Kfz.305) (4 x 2) During World War Two the German Army adopted and intensively used many types of cargo truck, but without doubt the three-tone Opel "Blitz" was the most famous of all Wehrmacht vehicles. With more than 100,000 built, these trucks with the Bitz's characteristic lightning emblem on the radiator front panel became symbolic of Germany's conquests. Its tire tracks could be seen in the great city squares of Europe; in the fields of France and also in the endless sands of the African desert; and it even overcame the infamous Russian mud. These trucks had a reputation of hardiness and being easy to repair which made them a legend.


By the late 1930s the German military inventory presented an enormous logistic problem, with over 100 different vehicle types in service.

A desperate programme to rationalize this situation was put in hand under the leadership of General von Schell, who was then director of mechanization. His aim was to cut down the vast number of types and bring in a degree of standardization which, when plans were finalized, allowed just 30 vehicle types.

In the 3-ton medium category Opel's design was the most successful. The Opel Blitz 4x2 was of a conventional layout and featured a pressed steel commercial type cab with wooden body. Under the so called Schell programme all 4x2 vehicles were designated Typ S. The 4x2 was produced in many different variants, for example general service, fuel tankers, house body etc. As the need for better cross-country performance became a premium it was decided by Opel to produce a four-wheel-drive 3-ton truck with the designation Typ A and based on the same basic vehicle design as the Typ S. The addition of a driven front axle gave tremendous advantages over the normal 4x2 truck, and the wheelbase for the 4x4 was shortened by 15cm (5.9m). A two-speed transfer box gave the vehicle a choice of 10 forward gears. During the production span from 1937 to 1944 some 70,000 Opel Blitz trucks were built, as well as over 25,000 Allrad' (four wheel drive) models. By late 1944, however, manufacture was totally disrupted by Allied bombing and the Allied advance across Europe, making plans to produce vehicles in 1945 fruitless. The variations of body design were numerous, the most popular model being the house body.

The Blitz's possibilities were endless, and the vehicles were used as field ambulances, mobile laboratories, laundries, mobile command posts, field caravans, radio vans, cipher offices, and mobile workshops to name just a few. The body was made of timber and compressed card to save valuable steel. Later during the war when raw materials were desperately short, the cabs were produced from wood and pressed card and termed Ersatz cabs. During the winter campaigns on the Eastern Front even the four-wheel-drive vehicles were almost brought to a standstill, and the Waffen- SS developed a unique three-quarter track vehicle from an Opel Typ A and obsolete PzKpfw I tank track assemblies: the rear shaft was shortened and the driven axle was moved forward to line up with the sprockets, and because of its performance the Maultier, as the vehicle became known, was accepted for standard production. Similar conversions to Ford and Daimler- Benz vehicles were also carried out, but were not so numerous.

Email ThisBlogThis!Share to TwitterShare to FacebookShare to Pinterest
Labels: Weapon