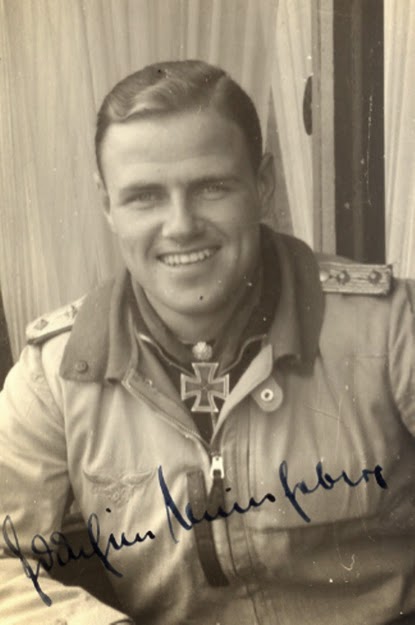 Outstanding German fighter pilot and combat commander of Jagdgeschwader 26 (JG 26), considered to be the Luftwaffe's best fighter wing while under his leadership. A professional officer in the prewar Luftwaffe, Joachim "Jochen" Muencheberg was successful in the French campaign and in the Battle of Britain; he was awarded the Knight's Cross of the Iron Cross for 20 air combat victories. The squadron he led, Staffel 7/JG 26, was sent to Sicily in early 1941 as an independent command and given the mission of winning air superiority over Malta. Amazingly, this unit of 12 Messerschmitt fighters was totally successful in this daunting task, destroying Malta as an offensive base and causing the British to revise their strategy for the entire Mediterranean Theater of Operations. Staffel 7 spent six months in the theater, based in Sicily, Greece, and Libya, and was credited with 52 air victories without losing a single pilot, a record arguably unmatched by any squadron-sized formation in history when facing an opponent of nominally equal ability.

Upon his return to France, Muencheberg was given command of the 2d Group of JG 26 and led it from Abbeville during the period of the Luftwaffe's greatest ascendancy over RAF Fighter Command, whose respectful pilots called Muencheberg's group "The Abbeville Boys," a nickname that Western Allies would come to apply to any especially aggressive Luftwaffe fighter formation.
In mid-1942, Muencheberg was ordered to the Eastern Front to fill in for a wounded wing leader. He soon scored his 100th air victory, for which he was awarded the Oak Leaves with Swords to the Knight's Cross of the Iron Cross and promoted to major. He was given permanent command of JG 77 and led it to North Africa in October 1942. He increased his victory total to 135, including 102 against the Western Allies, but on 23 March 1943, while on his 500th combat mission, he collided with a Spitfire and crashed to his death.
Posted by Mitch Williamson at 9:37 PM