The Assault on Levita 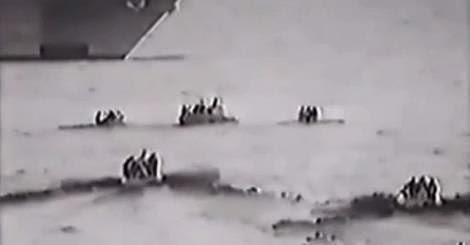 The survivors of the enemy convoy sunk on 7 October were landed on Stampalia, where the LRDG had M2 patrol. A small naval craft (the Hedgehog) dispatched from Leros to bring back ten prisoners of war for interrogation, called with engine trouble at Levita, about twenty miles to the west of Calino. A party sent by motor launch to the assistance of the Hedgehog found only a smoldering wreck and was fired on from the island. As the possession of Levita was considered essential to the Navy, and as it would be useful as an observation post, the commander of 234 Brigade ordered the LRDG to capture the island. Major Guild and Captain Tinker urged that a reconnaissance should be made before the assault force was landed, but permission to do this was not granted.

It was decided to attack with forty-eight men under the command of Captain J. R. Olivey, the force including twenty-two from A Squadron under Lieutenant J. M. Sutherland, and the remainder coming from B Squadron. Sutherland's patrol (R2), was withdrawn from the coastal battery on Mount Scumbardo, in southern Leros, and was joined by a few men from R1 and T2 patrols. The B Squadron party included Y2 and part of S1 patrol. In case the enemy should be occupying both ends of Levita, B Squadron was to land to the west of the port, which is on the south coast, and A Squadron to the east. The objective was to reach the high, central ground over- looking the port.

The landings were to be made from two motor launches in small, canvas boats, but as these had been punctured in air attacks, the troops had to patch them with sticking-plaster before they could practice rowing in them. The force had four infantry wireless sets for inter-communication between the two parties and with the launches, and a larger set for communication with Leros. When they were about to leave at dusk on 23 October, however, it was discovered that the A Squadron set had not been netted in with the others.

Most of the men were violently seasick before they reached Levita. It took A Squadron a long time to float the canvas boats from the tossing launch, but they eventually got away and landed on a very rugged coast, where the men rescued as much of their gear as they could from the rocks and dragged it up a cliff face. Sutherland told his wireless operator to try to get in touch with Olivey, but at no stage was he able to do so.

After disembarking the two parties, the motor launches were to shell a house thought to be occupied by the enemy in the center of the island. Instead of shelling this building, however, they concentrated on an old hut on a ridge in front of A Squadron. When the shellfire ceased, Suther- land's party moved towards the ridge and discovered nearby the burnt-out hull of the Hedgehog. They then came under machine-gun fire from the rear, presumably from somewhere near their landing place. This kept them pinned down on bare ground until they were able to get together and rush the gun position, which they captured with a dozen prisoners. Trooper H. L. Mallett was severely wounded and died despite the efforts of the medical orderly (Private B. Steedman) to save him.

Although they again came under machine-gun fire, A Squadron continued to advance and secured the ridge before daylight. They flushed the enemy out of the hut, but did not occupy it because it was in a vulnerable position. Trooper A. J. Penhall was mortally wounded, but Trooper R. G. Haddow, although severely wounded in the stomach, recovered as a prisoner of war. Several other men received minor wounds.

At the first streaks of daylight, three or four seaplanes began to take off from the Levita harbor. The New Zealanders, who overlooked the harbor from the ridge, opened fire, and for a moment it seemed that Trooper L. G. Doel had put one seaplane out of action with his Bren gun, but it moved out of range and took off after some delay. When the seaplanes came overhead and began to strafe, the men returned the fire, but as their bullets only bounced off harmlessly they decided not to waste ammunition.

Having met no resistance on landing, B Squadron was within 500 yards of the enemy head- quarters by dawn and could hear fighting on the other side of the island. Had Sutherland been able to make contact with Olivey by wireless, he would have advised him of his position, and B Squad- ron could have gone ahead without fear of firing on A Squadron. The Germans, who received reinforcements during the day, isolated the New Zealanders on the ridge with air attacks and machine-gun and mortar fire, while they encircled and captured most of the B Squadron party.

Having disposed of B Squadron, the enemy was then able to employ his full strength against A Squadron, which was holding three positions on the ridge. Sutherland had with him the wireless operator, the medical orderly, the wounded, three or four other men, and the German prisoners. Sergeant E. J. Dobson was in charge of a party in a central position, armed with a Bren gun, a Tommy gun, and some rifles, and farther away on high ground, Corporal J. E. Gill had the third party. Trooper J. T. Bowler, who went down to the landing place for water, and a man who attempted to deliver a message from Gill to Sutherland, were not seen again and were presumed to have been killed. The enemy eventually overwhelmed Sutherland's force, but Gill and three men avoided capture for four days by hiding among some rocks. They were unable to attract the attention of a launch that circled the island and, as they were without food and water, had to give themselves up to the enemy.

With instructions to evacuate the force from Levita, the commanding officer of the LRDG (Lieutenant-Colonel Easonsmith)* arrived by launch during the night 2425 October, but found only Captain Olivey, the medical officer (Captain Lawson), and seven men of B Squadron at the rendezvous. Olivey returned with Major Guild the following night to search for the missing men, but found nobody. The LRDG lost forty men on Levita.
Posted by Mitch Williamson at 8:47 PM