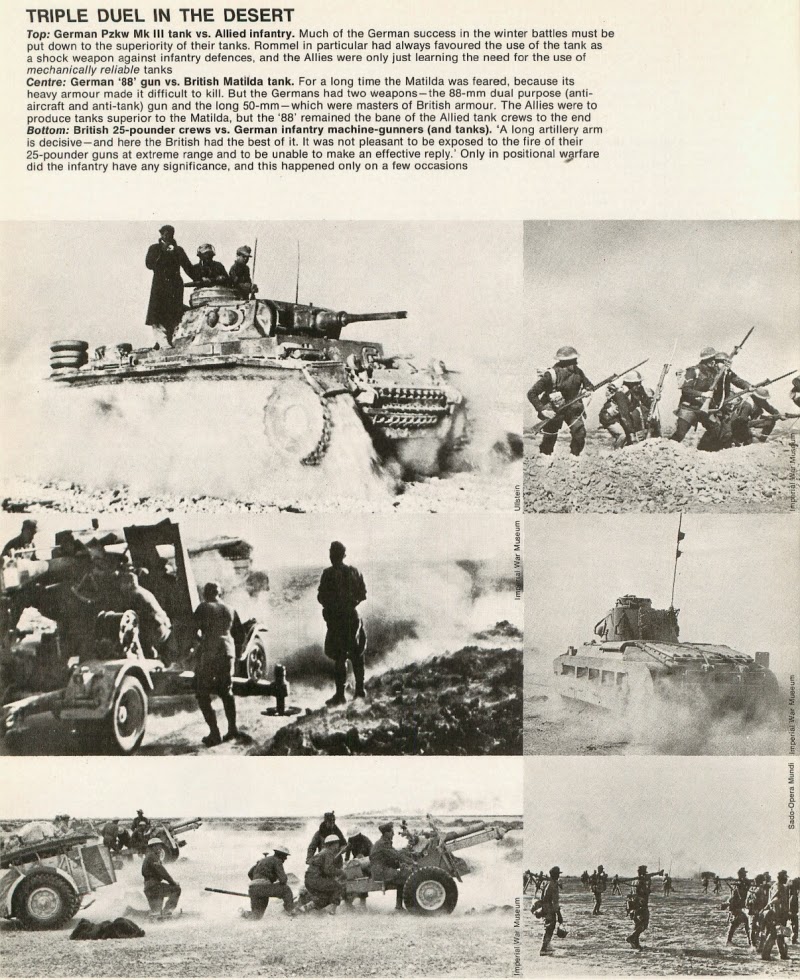 Some of the tactical principles that the Germans embraced, but which the British usually did not, were as follows:

(a) A mechanized striking force should always operate with all arms in a close grouping. Wide dispersion was not an ideal to be encouraged, especially at times when the Luftwaffe enjoyed a superiority over the RAF.

(b) In an all-arms grouping, the speed of the whole was necessarily that of the slowest vehicle. Thus the tanks were forbidden from racing off over the horizon and leaving everyone else behind; nor should they venture into ground that was impassable to all the other vehicles, except very locally. In any case, high speed was not a particularly desirable quality in a tank, although mechanical reliability was definitely a high priority for all vehicles.

(c) If vehicles broke down, it was essential to recover them and get them repaired without delay. Mechanical repairs were an essential element in mobility, especially when (as was usually the case in the desert war) the German tanks were rather heavily outnumbered by Allied tanks. Equally there was a great dividend to be won by holding the battlefield at the end of a day's fighting, so that damaged vehicles could be recovered.

(d) Repairing vehicles in darkness is ridiculously difficult unless you use floodlights. This may well give away your position to the enemy; but at least you will have more vehicles running in the morning, when the enemy is ready to attack you.

(e) The cohesion of an all-arms force relies heavily upon good radio communication. No resources spent to that end will ever be wasted (and by the same token, it is noticeable that all the way up to the first battle of Alamein, the DAK enjoyed a marked superiority over Eighth Army in intercepting and interpreting enemy transmissions).

(f) Perhaps most important of all - firepower was the key to any battle, as Rommel had already clearly laid down in the 1940 campaign in France. Before you did anything else, you had to flail the enemy positions, and especially his AT weapons, with a heavy bombardment of HE shells. Only after that could you decide whether or not he had been weakened enough for you to launch an assault. The HE should be fired by PzKw IV tanks at a range of around 2,000 metres, and by field artillery from a little further back.

(g) At every stage there must be a high level of reconnaissance: first to identify enemy strength and dispositions, and later to determine exactly how well he has been suppressed by firepower. The initial attack by firepower would be converted into a full-blooded advance to close range only if the commander was convinced that the defending AT guns had been suppressed. If this did not happen, the Germans would usually pull back and call off the whole operation. Only on a very few exceptional occasions would higher operational orders overrule the purely tactical decisions of the commander on the spot.

(h) It is not very clear whether or not this stress on reconnaissance included the idea of infantry patrolling on foot, which certainly played an important part in traditional British - and even more so, Australian - doctrine. To the present author it seems that it did not, and that the German concept of reconnaissance was all about motor vehicles.

Beyond these basic and fundamental principles, the Germans also exhibited a number of lesser tactical 'tricks'. An important one was to use AT guns in an offensive as well as a purely defensive role, so that wherever there was a tank, there would also be a towed AT gun ready to come into action at a moment's notice. This often caught the British by surprise; in effect, it doubled the AT firepower of any given column of vehicles - and often without the low-slung towed guns being visible from a distance, since they would be concealed in the huge plumes of dust raised by the tanks and by the trucks that were towing them. Another tactical habit was to attack out of a low sun in order to blind the enemy gunners, which against Eighth Army normally meant driving eastwards towards the end of the day.

Yet another was a habit of leading from the front, especially by Rommel himself. He was liable to turn up wherever the fighting was hottest, to direct the local battle in person. This often had a beneficial effect on the outcome within his own field of vision; but equally it drove his staff to distraction, since it meant he was often absent from his central HQ when important operational decisions had to be taken. He has sometimes been criticized for being the best battalion commander in the army, but perhaps not the finest staff officer.
Posted by Mitch Williamson at 6:38 PM