Stanislaw Skalski and His "African Circus" 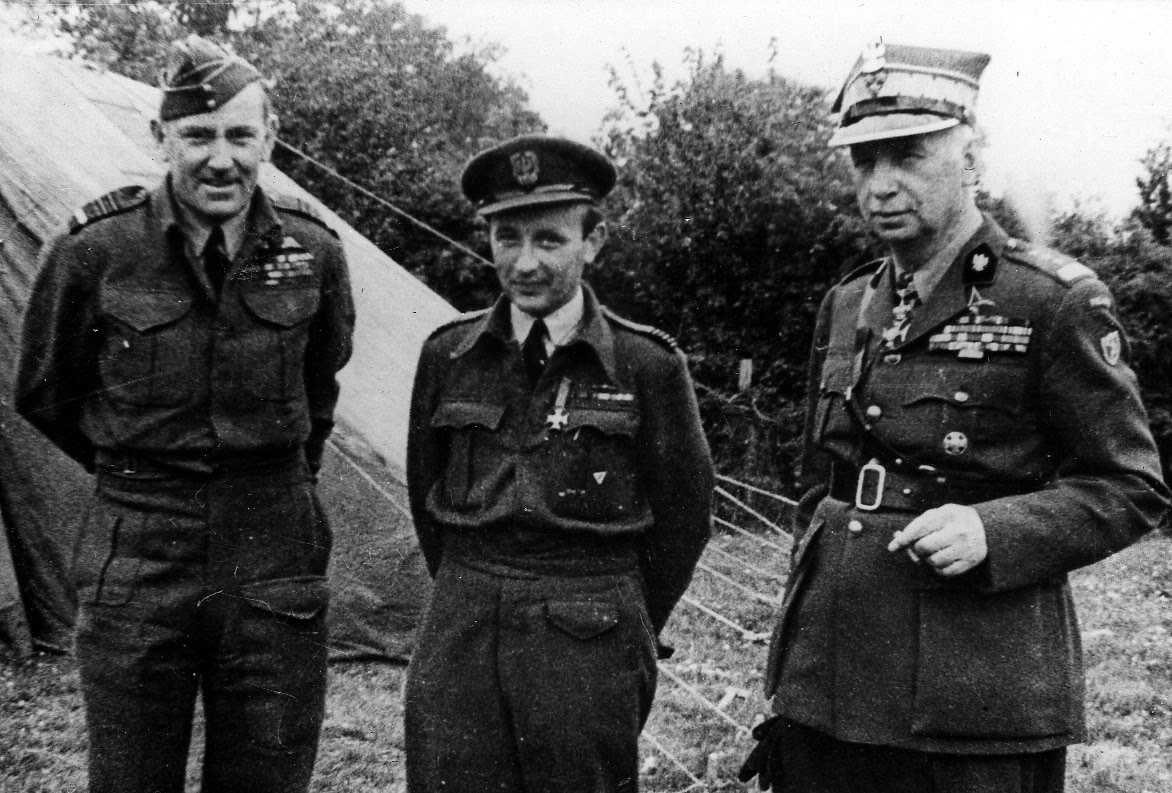 On 12 August 1940, 2/Lt Skalski joined 501st Squadron RAF (commander S/Ldr H.A.V. Hogan) and took part in the "Battle of Britain". Stanislaw Skalski's part in the combat of 5 September 1940, was very dramatic. Early in the morning, 501 Squadron took off to attack a large group of German aircraft. In first attack Skalski managed to hit a He 111 bomber, and set its right engine on fire. Following this, the Polish pilot shot down one of the escorting Bf 109s. The pilot of the Bf 109 bailed out. A few minutes later, as Skalski flew alone at 8000 meters altitude, he made a surprise attack on another Messerschmitt. With success! But in turning to his map to note the area of the victory, his own aircraft was hit by a well-aimed burst of fire. The shells slammed into the fuel tanks and the "Hurricane" immediately caught fire. Skalski bailed out from his diving fighter and parachuted to the ground. Severe burns kept him in a hospital for six weeks. During the Battle of Britain, Skalski shot down a total of six German planes.

Following the combat death of Capt. Ozyra on 29 April 1942 (in the same battle, Maj. Marian Pisarek was also killed), Capt. Skalski was given the command of the Polish 317 Squadron for five months. On 1 October 1942 317 Sqn was given a new commander, Capt. Zbigniew Czajkowski, and Skalski's African career began.

The Polish Fighting Team (PFT), popularly called "Skalski's Circus", was made up of the best Polish fighter pilots. All fifteen of them volunteered and Capt. Stanislaw Skalski was their commander. After a month’s transition, the Polish pilots arrived at Bu Grara airfield (250 km west of Tripoli) on 13 March 1943. They at first became part of 145 RAF Squadron (commanded by S/Ldr Lance Wade) as the "C" Flight. The call code of 145 Squadron was "ZX" and the aircraft of the Polish Flight received the individual code numbers "1" to "9".

Operational duty for the PFT began 17 March 1943. The first combat missions were in "Spitfire" Mk Vc trop fighters, but after a week the unit was re-equipped with new "Spitfire" Mk IX (while other flights of the 145th still flew the Mk V!). On 28 March 1943, the PFT drew its first blood. The flight led by Skalski encountered a group of Ju 88's escorted by Bf 109Gs of II./JG 77. No fighter planes were shot down on either side, but Skalski and Lt. Horbaczewski claimed killings of two Ju 88s.

On 2 April 1943, four Polish "Spitfire" pilots from 145 Squadron attacked 16 Bf 109s of II./JG 77 and claimed three Messerschmitt 109s shot down, one of them by Skalski. The record of II./JG 77 'Herzas' shows: the Bf 109s attacked a formation of Douglas Bostons escorted by "Spitfires", and Feldwebel Alexander Preinfalk claimed one Boston shot down (his 64th victory). Oberleutnant Heinz Dudeck's Bf 109 G-6 was the only German loss. Dudeck belly-landed and escaped the wreck unhurt. He was taken care of by some local Tunisians who fed him milk and ten raw eggs! On the Polish side the "Spitfire" piloted by Lt. Arct was damaged, but he was able return to base.

Two days later, the Polish fighters attacked a group of Ju 88s accompanied by Bf 109s. The German escort prevented them from attacking the bombers, but Skalski and Capt. Krol each downed one Bf 109. Lt. Martel claimed one 109 damaged. Next day, Lt. Horbaczewski scored a single Bf 109, but his "Spitfire" was heavily damaged on the mission. On the afternoon of 6 April, Lt. Sporny and Sgt. Malinowski destroyed two Bf 109s.

On 18 April 1943, the Polish Team of 145 Sqn ('C' Flight) sustained its only loss, as F/Lt Wyszkowski, lagging behind a formation, was bounced from the sun by a Messerschmitt Bf 109 - Rotte of 7./JG 53 'Pik As'. Unteroffizier Georg Amon shot down the "Spitfire". Wyszkowski crash-landed in enemy territory and was taken prisoner by the Germans. This was AmonŤs first victory. Two months later (on 25 June 1943, vividly accounted in Johannes Steinhoff's book 'Die Strasse von Messina'), when JG 53 was based in Sicily, the Luftwaffe's Fighter General Adolf Galland (visiting Sicily at that time) personally ordered Amon to be court-martialled for 'cowardness'; Galland claimed that Amon had deliberately turned away from combat to avoid confrontation with B-17s. However, the general confusion on Sicily at that time saved Amon from the court-martial. With a total of nine victories, Amon was shot down by AA over Germany on 2 April 1945 and was taken prisoner by the Allies.

On 20 April 1943, the "Spitfires" of 145 Squadron made a surprise attack on a mixed formation of German and Italian fighters and claimed to have shot down nine, of which the Polish pilots claimed three Bf 109s and three Macchi Mc-202 "Folgores". That day, I. and II./JG 53 'Pik As' lost a total of five Bf 109 Gs in aerial combat. At least one - piloted by Leutnant Rolf Schlegel - was shot down by Spitfires.

On 22 April 1943, the entire 244 Fighter Wing with 145 Squadron acting as top cover attacked a formation of six-engine Me 323 Gigant of TG 5 escorted by Italian fighters and the Messerschmitt 109s of JG 27, JG 53 and JG 77. The P-40s of 7 Wing, SAAF, also took part in the attack, claiming the destruction of 31 Me 323s! Transportgeschwader 5 lost sixteen Me 323s. The Polish fighter pilots, led by F/Lt. Pniak, engaged the escort and claimed five Bf 109s and one Mc-202 shot down. In II./JG 27, three Bf 109s were lost: Leutnant Schlechter was shot down over sea and was saved by air-sea rescue, while Feldwebel Rudolf Lenz and Unteroffizier Heinz Golletz were missing. The only claims by II./JG 27 were made by Leutnant Schneider - two P-40s (his first and only victories in the war). JG 53 'Pik As' had one Bf 109 shot down: Leutnant Friedrich Fiebig of 6. Staffel bailed out with injuries. I./JG 77 'Herzas' suffered no losses, while one of its pilots - Leutnant Heinz-Edgar Berres claimed one "Spitfire" (his 43rd victory).

On 6 May 1943, "Skalski Circus" fought its last aerial combat. On this occasion, Skalski and Sgt. Sztramko downed 2 Bf 109s. On 13 May 1943 the war in Africa was over. During two months, the Polish pilots had shot down a total of 26 German and Italian planes. Capt. Skalski scored 4 aircraft, but the most successful of the unit had been Lt. Eugeniusz Horbaczewski been, with 5 confirmed victories.

After the Flight was disbanded, Capt. Skalski did not leave this theatre of war. As commander of 601 Squadron RAF "County of London", he took part in the invasions of Sicily and Italy. He returned to England in the end of 1943.

Stanislaw Skalski was the most successful Polish ace of WW II, with a record of 22 confirmed victories, 1 probable, and 1 damaged enemy aircraft. Three times he was awarded the British DFC, and he received many other medals. Following his return to Poland after the war, he was imprisoned by the Communist regime in 1949, on a charge of espionage for the West. He spent 6 long years in a jail, waiting for execution. That was his "reward" from the communists, a fate he shared with many other Polish soldiers returning from the West for their heroic and sacrificing duty. In 1956, Skalski was finally released from prison.
Posted by Mitch Williamson at 2:57 PM