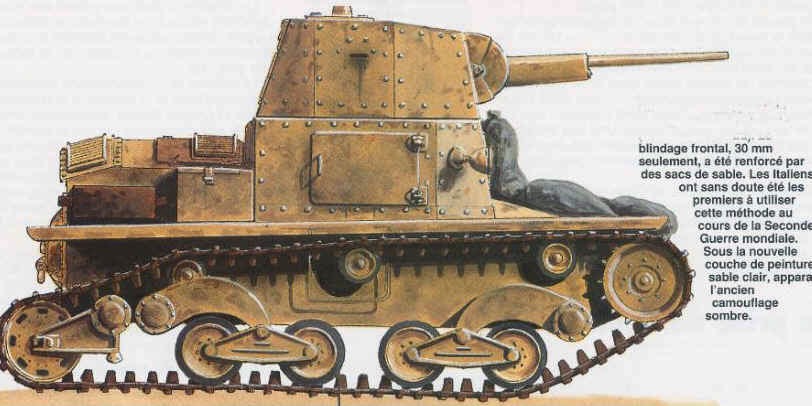 With a 47-mm sponson-mounted main gun and twin 8-mm (0.315-in) machine-guns in the two man turret, the M11/39 was soon outclassed with the introduction of improved Allied tanks. 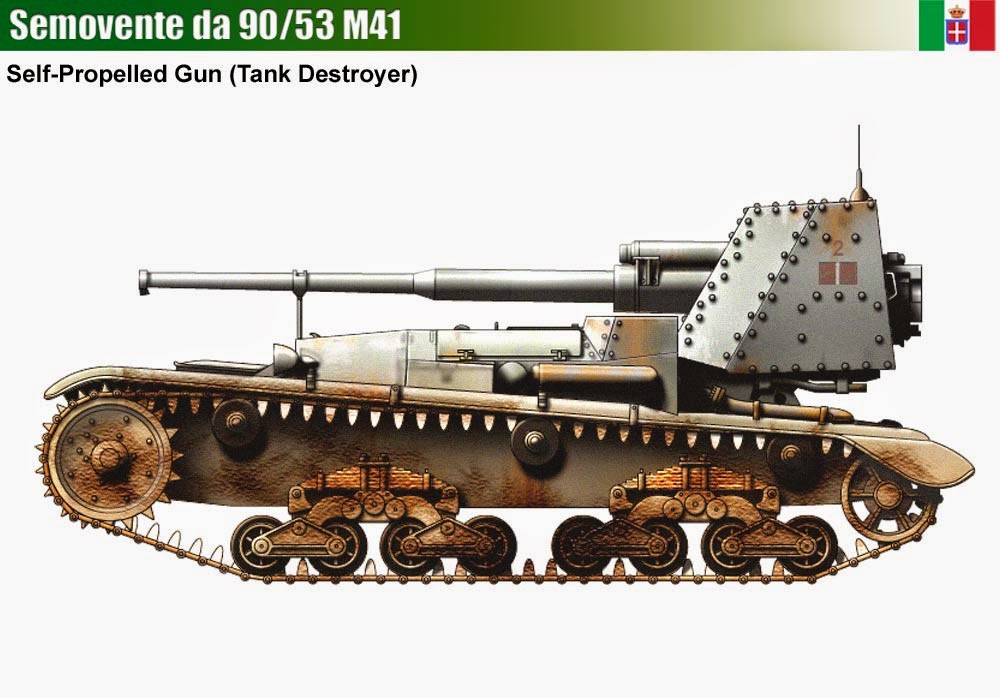 The basic Italian light tank of the war was the Fiat Carro Armato L6/40, the descendent of the 5-ton Fiat-Ansaldo light tank of the 1930s. Somewhat equivalent to the German PzKpfw II, the L6/40 weighed approximately 15,000 pounds, had a 70-hp engine, and was capable of 26 mph. It mounted a 20mm (.79-inch) main gun and one machine gun and had maximum 40mm armor protection. Unsuitable for front-line service because of its light armament, the L6/40 was utilized in the fighting in North Africa in cavalry and reconnaissance roles. It also was sent to the Eastern Front in fighting against the Soviet Union, and it served in Italy. Variants included command tanks and flamethrower tanks, and the L6/40 was also utilized in the Semovente 47/32 self-propelled assault vehicle mounting a 47mm antitank gun.

In 1940 the Italians decided to build a new tank, the Fiat M13/40, which was to be the basis of future Italian armor formations. It became the principal Italian medium tank and mainstay of Italy’s armor force in North Africa. Broadly based on the M11/39, which was obsolete by the time it was introduced, the 30,900-pound M13/40 had a crew of four. The new tank incorporated the basic hull design of its predecessor but was larger and carried a new high-velocity 47mm gun in the turret, with secondary armament of four machine guns in the hull, the reverse of its predecessor. It had improved but still inadequate (maximum 42mm) riveted armor protection. It was unreliable mechanically and, at 125 hp and 30,900 pounds, underpowered. The M13/40 also had a tall silhouette (nearly 8 feet).

The M14/40 first entered action in December 1940 in Libya and was used extensively in North Africa against British forces. Its deficiencies, including mechanical problems, soon became apparent. Although a practical design, it was no match for heavy British infantry tanks such as the Matilda. The M13/40 was also cramped and tended to catch fire easily when hit by antitank rounds. The Germans dubbed them Der Rollende Saerge (the Rolling Coffins). Given the shortage of British tanks in the early fighting in North Africa, Commonwealth forces did press a number of captured M13/40s into temporary service.

The M13/40 gave rise to the successful Semovente 75/18 self-propelled assault gun. This utilized the M13/40 chassis but replaced the turret with a boxlike superstructure mounting slightly right of center a limited-traverse 75mm Model 75/18 howitzer. It had a low silhouette(6 feet), a great advantage for an assault gun. The 75/18 saw extensive service during the war in North Africa as well as in Italy with both German and Italian forces. It also appeared as a command vehicle. The same M13/40 chassis was used in the Semovente 90/53, one of the most powerful antitank guns of the entire war. Similar to the German 88mm in that it was a converted antiaircraft gun, it was mounted, because of its size, in the open on the rear end of an M14/40 chassis. Only 24 were made, and all were destroyed in the 1943 Sicily campaign.

In mid-1942 Italy considered building the successful German PzKpfw III under license. The idea was rejected outright in early 1942, probably because of pressure from Fiat and Ansaldo, which controlled Italian tank construction.

Italian Doctrine
The Italians had a well-developed armor doctrine that closely paralleled the Germans’ blitzkrieg. They planned to utilize medium tanks to punch holes in enemy lines while light tanks served as the exploiting arm. Early on, especially in the fighting in North Africa, the Italians lacked mobile artillery, although their later selfpropelled guns, the Semovente, helped make up for this. The Italian artillery doctrine of fuoco da manovra (fire and maneuver) called for artillery and antitank guns to be located close to the front line supported by infantry.

The chief deficiency in Italian armored doctrine was the lack of tactical air support, the consequence of Italy’s embrace of Guilio Douhet’s doctrine of strategic bombing. Other handicaps included a lack of radio equipment in the tanks. As with the French, Italian tank crews communicated in battle primarily with flags. Italian forces were also not as well trained as the Germans. As two scholars have summed up, “Italy had developed the concepts but lacked the materiel to implement them.”
Posted by Mitch Williamson at 6:52 PM