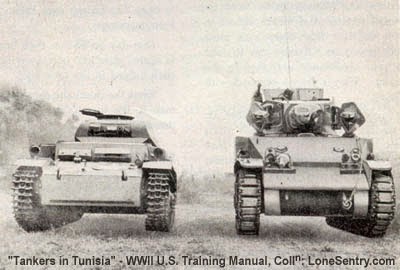 The first major employment of tanks with infantry by the United States was on November 8, 1942 — the Operation Torch landings on the North African coast. Amphibious assault technology still required the use of LCMs (Landing Craft Mechanized) to transport heavy vehicles from ship to shore. The LCM was capable of carrying only one tank or large artillery piece at a time. Nevertheless, tanks made it ashore and were able to assist the infantrymen right from the outset of combat. During the initial assault from the beaches, the tank’s speed and armor were exploited to seize key mission objectives and destroy enemy positions.

One example comes from the 3rd Infantry Division’s landing at the town of Fedala, about ten miles northeast of Casablanca. The 7th Infantry Regiment had as an initial objective the seizure of French antiaircraft, coastal and field artillery batteries located on the Cape north of Fedala. COL William H. Wilbur, a senior liaison officer from MG George S. Patton Jr.’s headquarters, took control of 2nd Platoon, Company A, 756th Tank Battalion (L), which was just coming off landing craft. COL Wilbur sped through town to assist the regiment’s first battalion in silencing the coast artillery battery, which had been engaging landing craft enroute to the beach. After the tanks assumed an assault position, Company A, 7th Infantry opened fire on the battery’s fire direction center. The M5 tanks made an initial breach in the defensive wire, and infantry quickly seized the objective.

Units not in contact in North Africa continued to train while others eventually met the enemy in Tunisia. By the spring of 1943, Allied forces had made considerable progress in driving the Germans out of Africa. While the British 8th Army under General Bernard Law Montgomery pressed from the east, American, British and Free French units advancing from the west beat back the Afrika Korps into a tight perimeter on the Tunisian peninsula. At the end of April, the American II Corps was attacking German defenses along an east-west row of hills near the town of Mateur. The main defenses were atop Djebel Tahent, identified on U.S. maps as Hill 609. Riflemen from the 34th Infantry Division had fought their way to the base of the hill, but by April 29, had reached an impasse. Both sides had been exchanging mortar and artillery fire incessantly and the infantry could advance no further. Company I of the 1st Armored Division’s 1st Tank Regiment, another II Corps unit, was assigned to assist in breaking the stalemate. In the early morning of April 30, the tanks picked up the infantry and proceeded up the hill, at times literally pulling the riflemen along where the slope was too steep. The tanks destroyed a number of enemy positions, and when antitank fire became too deadly, the American infantry conducted a bayonet charge against the gun crews, allowing the tanks to continue. The absolute summit of Hill 609 was inaccessible to the tanks, but they supported the infantry with cannon and machine-gun fire until the position was secure. The tank-infantry team repelled counterattacks both at 609 and at the neighboring Hill 531. On May 2, the GIs saw heavy traffic moving north. The Germans were leaving.

The North African Campaign of 1942-43 demonstrates some of the earliest combat techniques of the tank-infantry team. There was yet no permanent affiliation of specific units with one another, so there was often no way to retain lessons learned from one engagement to the next. The infantry typically fought without the aid of armored forces, and called on the tanks to penetrate defenses or advance in the face of heavy small arms and artillery fire. Tank units were used to break through enemy formations, destroy tanks and other pieces of equipment, and reduce hardened fortifications and wire obstacles. However, the general lack of prior training created some major deficiencies in effective prosecution of the campaign.

The World War II American tank-infantry team was the product of numerous factors, foremost among which were the men who fought the tanks and the men who carried the rifles. These men were willing to come together as a team, frankly recognize each other’s strengths and weaknesses, and use the best of what they had to drive the enemy from the field of battle. For their commanders, this coming together was a sort of laboratory experiment, with sometimes frustrating, even disastrous results. In North Africa, the United States Army began to realize that without closer cooperation between tanks and infantry, the war could be lost.

Posted by Mitch Williamson at 2:21 PM