The Beginning of German Mediterranean Involvement 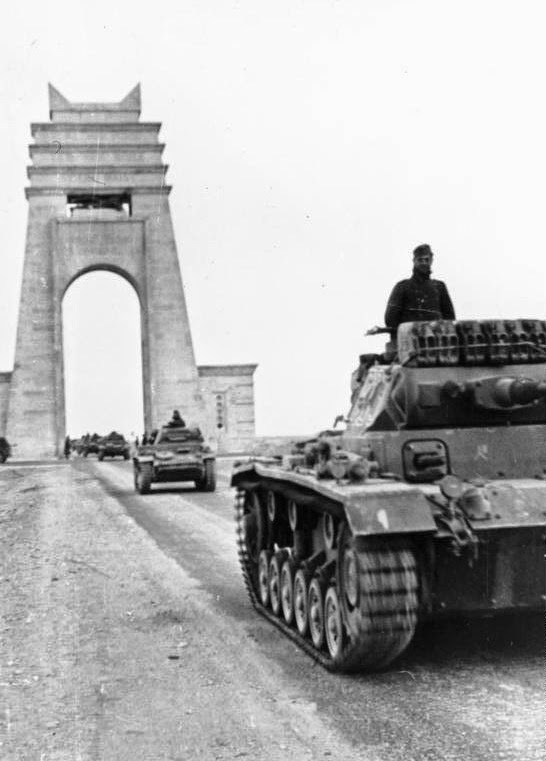 The Via Balbia, along which this German column is moving, was the only metalled road in the entire region. Along this solitary road would have to flow all the food, fuel, ammunition, water and other supplies necessary to sustain operations. The British Long Range Desert Group's main task was to watch and report this transport, deep behind enemy lines. (TM 1051/A5)
From the outset of the war in the Mediterranean, the Italians requested material help from Germany. But the Germans refrained, believing that any assistance could best be provided in the form of German units. They offered long-range bombers to operate from Rhodes against the Suez Canal as early as July 1940 and other early plans included the seizure of Gibraltar. Yet surprisingly, no plan was drawn up for dealing with Malta, perhaps because it was expected to fall easily once the British had been dealt with in Egypt. As the summer wore on and the prospects of an invasion of Britain receded, other ways of striking at the British were considered, including use of the Luftwaffe in the eastern Mediterranean, and a proposal that a mechanised corps be sent to strengthen the Italian invasion of Egypt. This was supported by the Kriegsmarine (German Navy), who regarded the Suez Canal as an objective of vital importance. Adolf Hitler despatched Generalmajor Wilhelm Ritter von Thoma, Director of Mobile Forces, to study the situation. In the meantime, 3rd Panzer Division was put on standby to move to Africa.

At the meeting between Hitler and Benito Mussolini at the Brenner Pass on 4 October 1940, Il Duce was not very enthusiastic about these proposals. Combined with a negative report from von Thoma on 24 October, in which he stressed at length (as would all that came after him) the difficulties of supply in Libya, Hitler put the scheme on hold and 3.Pz.Div. was stood down. Hitler wrote on 12 November that 'German forces will be used, if at all, only when the Italians have reached Mersa Matruh'. He further wrote to Mussolini on 20 November, proposing that the Luftwaffe operate long-range bombers from Italian bases against British shipping. Although he wished to have these aircraft available for other operations by February, it was hoped that they could inflict substantial damage and orders were issued for Operation 'Mittelmeer' on 10 December. The force chosen was Fliegerkorps X from Norway commanded by General der Flieger Hans-Ferdinand Geissler - an independent force of all types of aircraft which specialised in antishipping operations. It moved through Italy around Christmas and by 8 January, 96 bombers were available, joined two days later by 25 twin-engined fighters. They commenced operations on 10 January and had an immediate and profound effect on British freedom of movement at sea.

This unwelcome arrival was not unexpected by the British but their Convoy 'Excess' was nevertheless put under enormous pressure on 11 January, and the precious aircraft carrier HMS Illustrious was badly damaged and forced into Malta. Malta herself was the next target for sustained attack, which also limited the extent to which the British could interfere with Axis shipping en route to Tripoli. Illustrious managed to escape to Alexandria on 25 January, but would still require months of repair before being fit for action. The Prime Minister, Sir Winston Churchill, declared that the arrival of the Fliegerkorps 'marked the beginning of evil developments in the Mediterranean'. By refuelling in Rhodes, German aircraft could now mine the Suez Canal, which greatly burdened the defences and increased the turnaround time of the shipping bringing reinforcements and supplies. Air defence throughout the area would need strengthening and the strategic importance of Malta was increased yet further.

At about the same time, Hitler's naval staff convinced him that the Italian defeat in Cyrenaica was a serious strategic setback, and that with the threat to Egypt removed, the British could not now be driven from the Mediterranean - something they regarded as essential to the successful outcome of the war. Also, the British would be able to send strong forces from Egypt to Greece, a process that had already begun. While his aircraft were attacking Convoy 'Excess', Hitler issued his Directive No. 22 on the assistance to be given in the Mediterranean theatre; necessary he said, 'for strategic, political and psychological reasons'. Tripolitania must be held and a sperrverband (special blocking detachment) was to be despatched under the codename 'Sonnenblume' (Sunflower).

After much discussion between the various branches of the German High Command, certain units from 3.Pz.Div. were detached to form the nucleus of a new formation to be called 5th Light Motorised Division, commanded by Generalmajor Johannes Streich. There were long arguments with the quartermaster's department over scales of transport and special requirements. On 5 February 1941, as the new division was forming, Hitler told Mussolini that he would reinforce it with a complete panzer division as long as the Italians held the Sirte area and did not merely withdraw on Tripoli. Mussolini agreed to this on 9 February, announcing at the same time the replacement of his commander in Libya and the despatch of two divisions, one armoured and one motorised. On 6 February Generalleutnant Erwin Rommel was peremptorily summoned from leave to Hitler's headquarters and told to assume command of the new force. It was to operate as a block on any further British advance and to clear Cyrenaica only when ready to do so. Rommel arrived 8 in Tripoli on 12 February. On the 19th, the name Hitler had personally given to the formation was formally listed as Deutches Afrikakorps (DAK).
Posted by Mitch Williamson at 7:01 PM